Shortly before the COVID lockdown in 2020, the sexual assault case involving a Pepperdine student who was victimized in her condo that borders the campus made local news after Lost Hills Sheriff’s Station deputies failed to issue a public safety alert with the predator was still at large.

The assailant, Matthew Fairchild, 36 , entered the residence at approximately 4:00 a.m., walked up the stairs and entered the victim’s bedroom. According to sources, Fairchild’s intent was cautious and calculated as to not wake the victim before he had a chance to violate her. He removed the covers, pulled up her nightgown and attempted to insert his finger into her vagina which awoke the victim in terror. The victim told law enforcement she “didn’t know if Fairchild was going to rape her, kill her, or both”.

Immediately after the assault, the victim called 911 to report the crime. Lost Hills Sheriff’s deputies reported to the scene approximately 40 minutes later.

Upon arriving at the residence, sheriff’s deputies began questioning the victim about the incident. But not in the protective and respectful manner a sexual assault victim – actually any victim – should be interviewed by law enforcement under the circumstances. Deputies questioned the victim and instead, dismissed the incident altogether as a “drunk fraternity friend”. Deputies left the scene without searching the property, interviewing the security guard and reviewing security footage or doing anything to protect the victim.

A few hours later, the victim called the station to file a complaint against the responding deputies. The station refused to take the complaint, instead offering to send deputies to the scene, a second time, to take a report.

A week later, I received the information about the initial incident, which now included detectives assigned to the case who were also unresponsive. The head of  security at the property repeatedly called the station offering security camera footage of the suspect. His calls went unanswered and decided to hand deliver the footage to the station as a last resort.

Upon learning this gross mishandling of the case, the complete dismissal of the sexual assault and with a predator at large in the community, which includes a campus with thousands of students, Dr. Ronda Hampton and I contacted Sheriff Alex Villanueva directly about the incident.

Sheriff Villanueva immediately made inquiries with the station.

Dr. Hampton and I followed up with the Sheriff the following day regarding the critical nature of issuing a public safety alert that a sexual predator was at large. Unfortunately, the Sheriff himself was also engaging in the dismissal of the sexual assault, which in turn resulted in a heated text conversation between myself (in green), Dr. Hampton and Sheriff Villanueva. 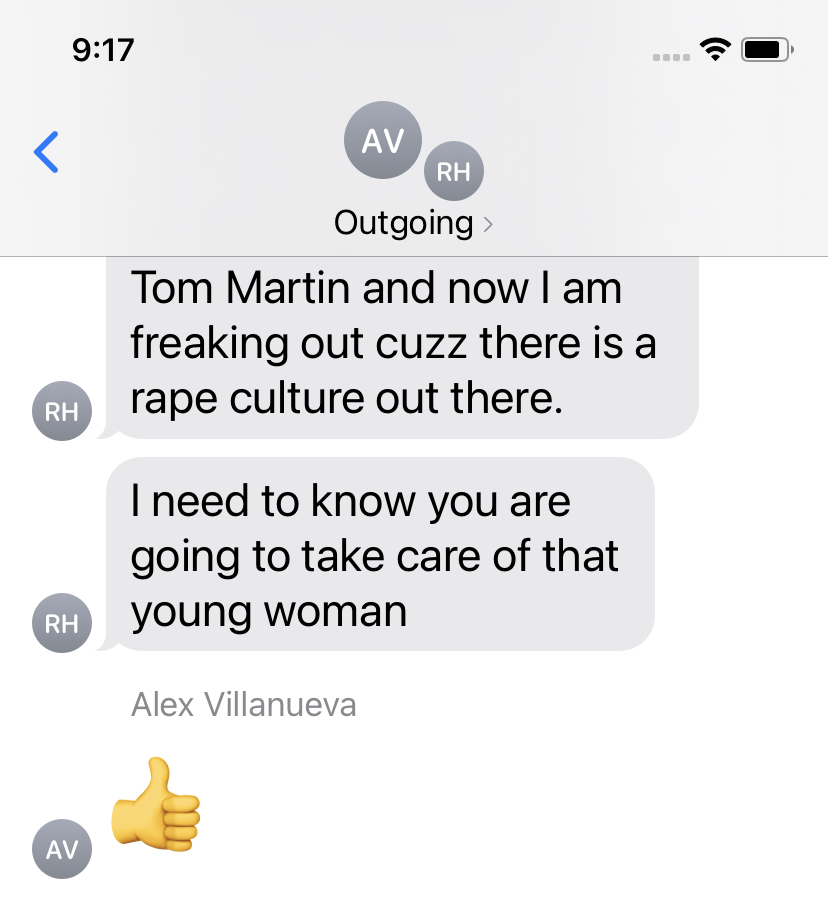 It wasn’t until I secured the footage (just discovered by the security guard the previous night) showing Fairchild attempting to gain access to multiple condo units and committing lewd acts in the hallway and forwarded the footage to the Sheriff that he abruptly changed his position from burglary to sexual assault and ordered the ordered the change of the charge on the Public Safety alert.

Within 24 hours of the alert being released, Fairchild was apprehended in a sting operation on PCH.

The Pepperdine Student Sexual Predator incident lead to a monumental shake-up in command staff and the final steps to accomplish a long overdue, clean sweep of rogue officers at the Lost Hills Station.

At the time, Sheriff Villanueva had been making good on his “Reform, Rebuild Restore” platform since he took office (in spite of the Sheriff’s recent setbacks), making critical changes at the high profile station since October 2019. As a result of their actions in this case, the deputies were heavily disciplined.

The community relationship with the station has improved dramatically since Sheriff Villanueva took the initiative making changes to personnel due to multiple high profile incidents adversely affecting the department.

As the COVID restrictions were lifted, the case was scheduled to go to court for a preliminary hearing. At that hearing, the judge ruled there was sufficient evidence to move forward to trial against Matthew Fairchild for the sexual assault charge.

During this time, Deputy District Attorney, Sunita Popal with the Victim Impact Program, was assigned to the case.  According to sources, originally, DDA Popal, who has been with the L.A. District Attorney’s office for the last five years, was interested in pursuing a conviction and wanted justice for the victim.

A few months later, at the preliminary trial, the victim came face to face with her attacker for the first time since the assault. The victim was understandably terrified being in his presence. The deputies who originally responded to the scene also took the stand and despite the overall gross mishandling of the case, the judge ruled there was sufficient evidence to move to trial.

On September 28th, instead of embodying the role of the prosecutor, protecting the rights of her client, the victim, and upholding the mission of the Victim’s Impact Program:

“We in law enforcement have a special obligation to the most vulnerable of crime victims. Those who have suffered life-devastating crimes – elder abuse, sexual assault, stalking, family violence and hate crime – should be treated with dignity and supported. They deserve all the compassion and protection that we in the criminal justice system can provide.”

DDA Popal changed her stance on the case, turned on the victim and began advocating for the criminal.

Instead of honoring the judges recommendations to move forward to trial and the victim’s right to seek justice, DDA Popal presented the victim with a plea deal that would result in the removal of the sexual assault charge and instead of facing 30 years to life, as Fairchild was originally facing, he would now get time served, plus a few more months, for first degree burglary in person, essentially landing back on the streets to continue to commit sexual assault without having to register as a sexual offender.

Ironically, the same charge was originally being pursued by the Sheriff’s Department, until glaring evidence was literally forced upon them resulting in a critical change in the charges filed.

The victim, in spite of continuing to be further victimized by the people tasked with protecting her and the public at large, refused to agree to a plea deal and demanded to move forward to trial. DDA Popal, knowing how traumatized the victim was, continued to try coerce the victim into accepting the plea deal and further intimidating her with the defense “bringing in a memory specialist” to scrutinize her testimony.

DDA Popal further told the victim that the sexual predator had “no intent” because “he had no idea what he was coming in to” when he entered the victim’s apartment.

Yet the security footage shows Fairchild clearly attempting to enter multiple units and when his attempts failed, he waves his hands in frustration while grabbing his penis.

As to further manipulate the victim, DDA Popal shared details of a case she was working on with the another victim (to demonstrate intent) where she described the case as “solid” because the victim was in the shower when the intruder grabbed her vagina saying “Give me that pu**y” using that to justify her version of “intent vs. no intent”, essentially  dismissing the trauma the victim experienced with Fairchild supporting the removal of the sexual assault charge.

Despite sufficient evidence to move forward to trial, including the video of Fairchild attempting to enter multiple units and committing a lewd act on camera, DDA Popal told the victim the DA approved dropping the sexual assault charge because she could have “made that up for the (civil) lawsuit”.

While the victim stated multiple times she wanted to proceed to court against her attacker, DDA Popal told the victim “it didn’t matter what she wanted, her supervisor would make the call anyway”. Popal also added that the DA wanted to avoid going to court because of the media attention the case has already received and it would require “a huge follow-up”.

DDA Popal’s offered the victim the opportunity to make a victim’s statement at Fairchild’s reduced sentencing hearing at a later, unknown date.

The victim can now expect her attacker, who has a long list of previous parole violations, on the streets again within a matter of months, ready to victimize her again. That is DA George Gascon’s brand of justice “reform” in L.A. County.

Fairchild is due in court October 14th.