On August 10th, the L.A. County Board of Supervisors voted unanimously to pass a motion to prohibit homeless encampments in unincorporated regions of the County that are designated as Very High Fire Hazard Severity Zones in an effort to prevent fires and potential loss of life and property.

“A growing number of unsheltered individuals are residing in remote, mountainous regions that are especially dangerous during fire season,” said Supervisor Kathryn Barger who co-authored the motion with Supervisor Sheila Kuehl. “Many unsheltered people require fire for survival to cook and keep warm. Unfortunately, this drastically increases the risk of nearby brush catching fire and spreading rapidly. Today’s motion is an important effort to protect people experiencing homelessness from fire risk and prevent any fire spreading in our communities.” Supervisor Katherine Barger’s announcement of the passing of the motion included the “Sheriff’s Department Homeless Outreach Services Team will provide notification to impacted individuals”.

While the passing of this motion may be instrumental to greatly reduce fire risk in the Santa Monica Mountains, the Board of Supervisors, who is currently sitting on a surplus of over 2 billion dollars, has not announced the release of additional funding to the Sheriff’s Department for the added manpower needed to enforce the new ordinance.

The motion was meant to piggyback off of CalFire’s original designation of High Fire Severity Zones and the recent efforts of the Los Angeles Sheriff’s Department’s successful clearing of encampments throughout L.A. County.

The LASD Homeless Outreach Team has increased their efforts significantly since May at the direction of Sheriff Villanueva to combat the catastrophic conditions and eliminate dangerous encampments which have contributed to a significant public safety risk throughout LA County.

Currently, the LASD HOST Team is funded for only four deputies, one Sargent and one Lieutenant to assist the entire homeless population of L.A. County.

Shortly before  Sheriff Alex Villanueva began his high-profile clean-up in Venice, he increased the team to 26 deputies, 2 sergeants and two lieutenants, in order to effectively service and address the complexeties of homeless outreach in L.A. County. The additional personnel is on loan from other teams within the COPS Bureau (Community Partnerships).

In July, the City of Malibu, a contract city with LASD, increased patrol levels in their contract for the first time in over 15 years. The coverage  however, due to the Board’s drastic defunding of over $400 million from LASD’s annual budget last year, left the unincorporated areas of L.A. County – specifically the canyons in the Santa Monica mountains – extremely vulnerable.

The increased patrol levels within city limits will give the deputies the ability to cite, and/or potentially arrest, however, additional manpower is needed to enforce areas where encampments were previously established and cleared and to prevent them from re-establishing. Many of the encampments are in outlying areas not covered by patrols in contract cities.

Despite the HOST Team’s efforts in Topanga since the beginning of the year, there was still a significant uptick in vagrant fires during the first six months of 2021 causing serious concerns. It was clear additional manpower and a more aggressive approach was critical to make headway before Santa Ana winds arrived.

On August 5th, a roundtable was coordinated by local activists to connect the local players in public safety. Members of LA County Fire, LASD HOST team, City officials from Malibu and Calabasas, county officials (including theL.A. County Housing Authority) and members of the community proactive in Public Safety met at Calabasas City Hall. The meeting led to expedited communication between agencies not before seen at this level in our region.

Previous interaction between LASD HOST team and local city officials was extremely limited due to a multitude of reasons, however, since the August 5th meeting, LASD HOST communication has not only improved dramatically with respect to strategy and planning for clean-ups, it has also been the catalyst inspiring collaborations between local officials, agencies and activists in the area that previously did not exist. An important factor in navigating this extremely challenging issue plaguing L.A. County for years.

The LASD Homeless Outreach team recently completed an extensive three-month clearing of encampments starting in Topanga, working their way throughout the canyon areas in the Santa Monica Mountains and ending at the heavily populated Malibu Lagoon area on November 9th, the third anniversary of the Woolsey Fire.

After a designated area is given approval by the county for clearance of encampments, there is a 30 day window where enforcement is critical to ensure the encampments do not re-establish. After that window has closed, the legal process starts all over again. During Santa Ana wind season, this protocol could prove to be catastrophic if additional patrols are not deployed to provide enforcement especially during critical weather events.

The county has yet to complete the legal language for the new ordinance that would allow encampments to be cleared within 24 hours rather than the lengthy and extensive current protocol, sometimes taking weeks to clear a pre-approved area. 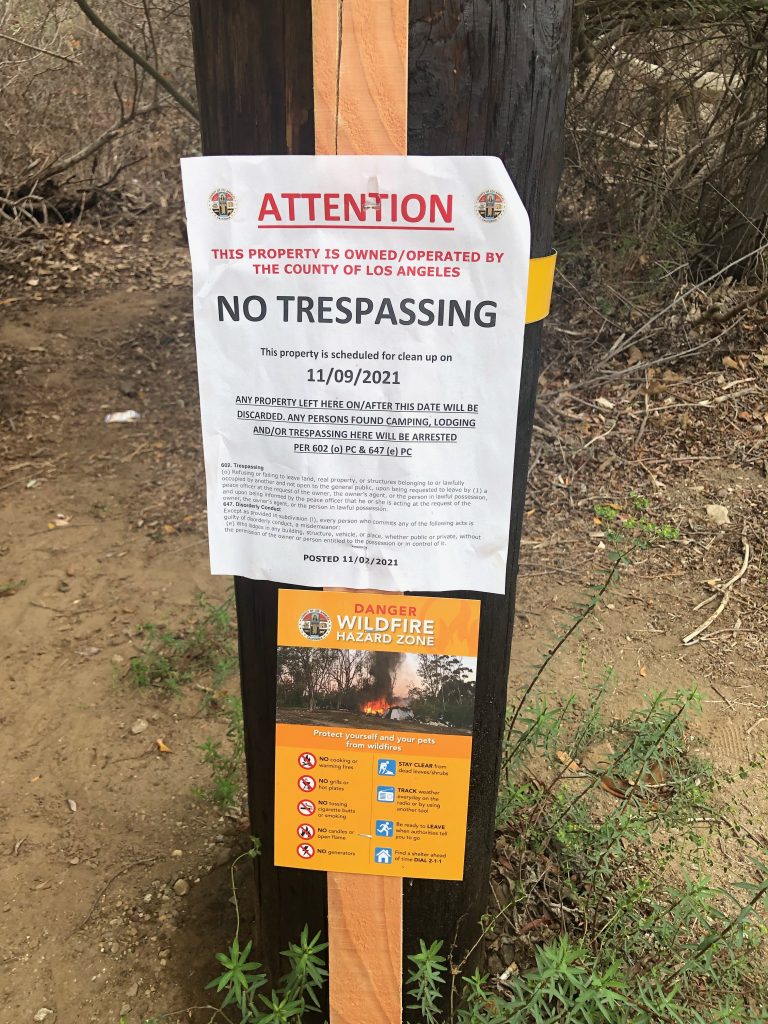 The station is tasked with servicing the majority of roughly 300 square miles in the Santa Monica Mountains high density brush area, a good portion of which hasn’t been burned in over 60 years and with decreased personnel due to law enforcement defunding affecting county area, Lt. Braden asked Kuehl’s office to increase funding an additional $200,000 on top of the $68,000 they currently receive.

“Public safety is a continuous process and round-the-clock enforcement is a critical component to ensure the canyons are free of encampments especially during Santa Ana Winds.” said Lt. Braden.

Malibu City Council members Bruce Silverstein and Steve Uhring have been proactive in the fight to clear encampments in our region meeting with Sheriff Villanueva at the Hall of Justice a few months ago to discuss a vigorous homeless outreach strategy before the height of fire season.

Additionally, I reached out to Malibu City Council members Karen Farrer, Mikke Pierson and Paul Grisanti to ask them about their efforts to secure more funding after the Lost Hills Station was denied by Kuehl’s office. At press time, I did not receive a response. 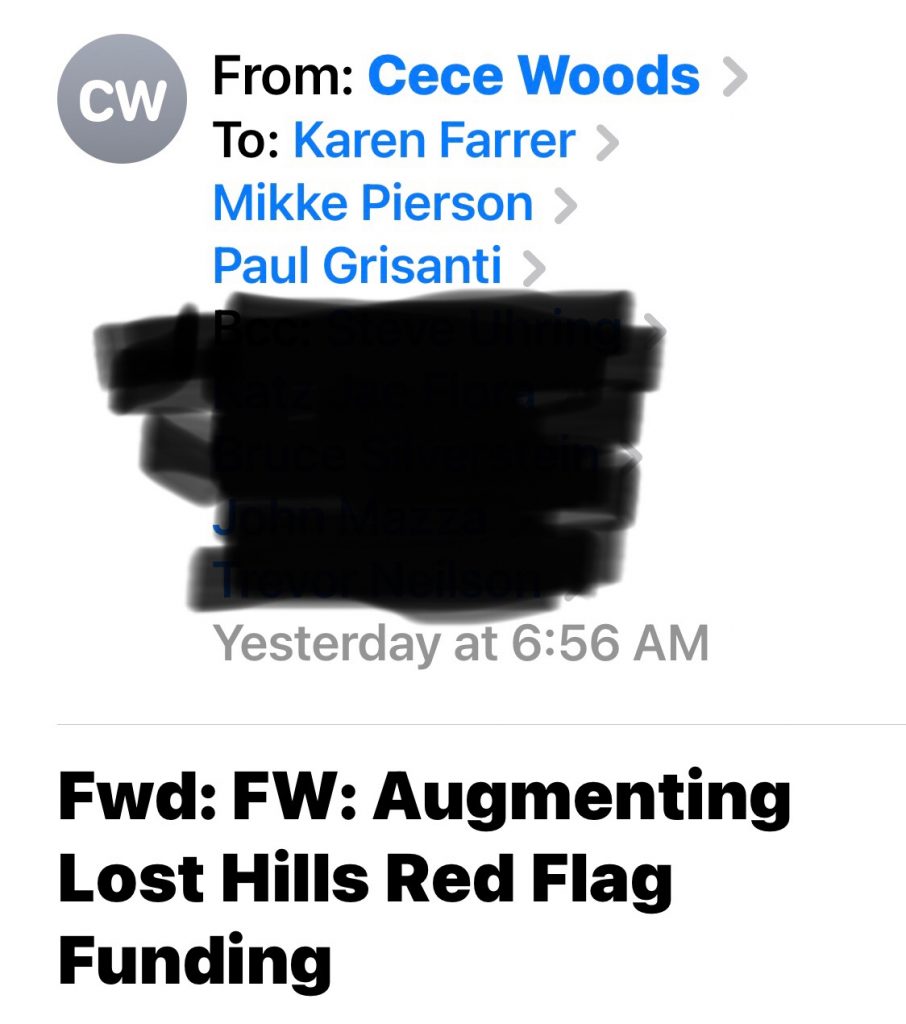 Without additional personnel at the station level to patrol high risk areas, as well as permanent funding to support to expand the LASD Homeless Outreach Team, both of which are already underfunded and overburdened, it seems the county, specifically Kuehl’s office who authored the August 10th motion, do not comprehend that Santa Ana Winds do not wait for “needs assessments” to wreak havoc in our region.

And with that, the LA. County Board of Supervisors recent motion to improve public safety in high fire danger areas will ultimately become nothing more than a cautionary tale this fire season.