On Wednesday, May 4th, Malibu Lost Hills Deputy Konrad Thieme was booked and charged with two felony counts of assault under the color of authority, and one county of making false statements in a report.

As early as two weeks ago, amid the on-going controversy regarding the cover-up in the Deputy Use of Force case that led to a shake-up of the executive staff at LASD and subsequent lawsuits against Sheriff Alex Villanueva and the department, rumors began circulating about a second violent case of Use of Force against a mentally disabled woman was allegedly being purposely stalled at the DA’s office.

Multiple sources inside the department confirmed details about the incident, the immediate dismissal of the deputy and the timeline of internal criminal investigation, which was transferred to the District Attorney’s office by LASD in a swift and timely manner given the egregious acts by the officer.

At the end of April, upon learning about the alleged Thieme Use of Force case, I contacted Lt. Jim Braden from the Lost Hills Station. Braden, with the department for 31 years, 22 at Lost Hills station, confirmed the incident occurred. Braden also confirmed the rumor the case allegedly was being stalled for political purposes, of which he intimated to me to be true and politically motivated to affect the Sheriff’s bid for re-election.

Last week, Braden initiated contact with the DA directly to inquire about their hesitation in filing the Use of Force case :

“This is Lt. Jim Braden with the Los Angeles County Sheriff’s Department. Can you please tell me who is responsible for holding a serious assault under color of authority for 10 months, delivered to DA on or about 7/2021. involving an incident on 4/10/21 involving a young female having a dispute with her mother. The was was…on body cam video by Konrad Thieme while two other deputies failed to intervene.” 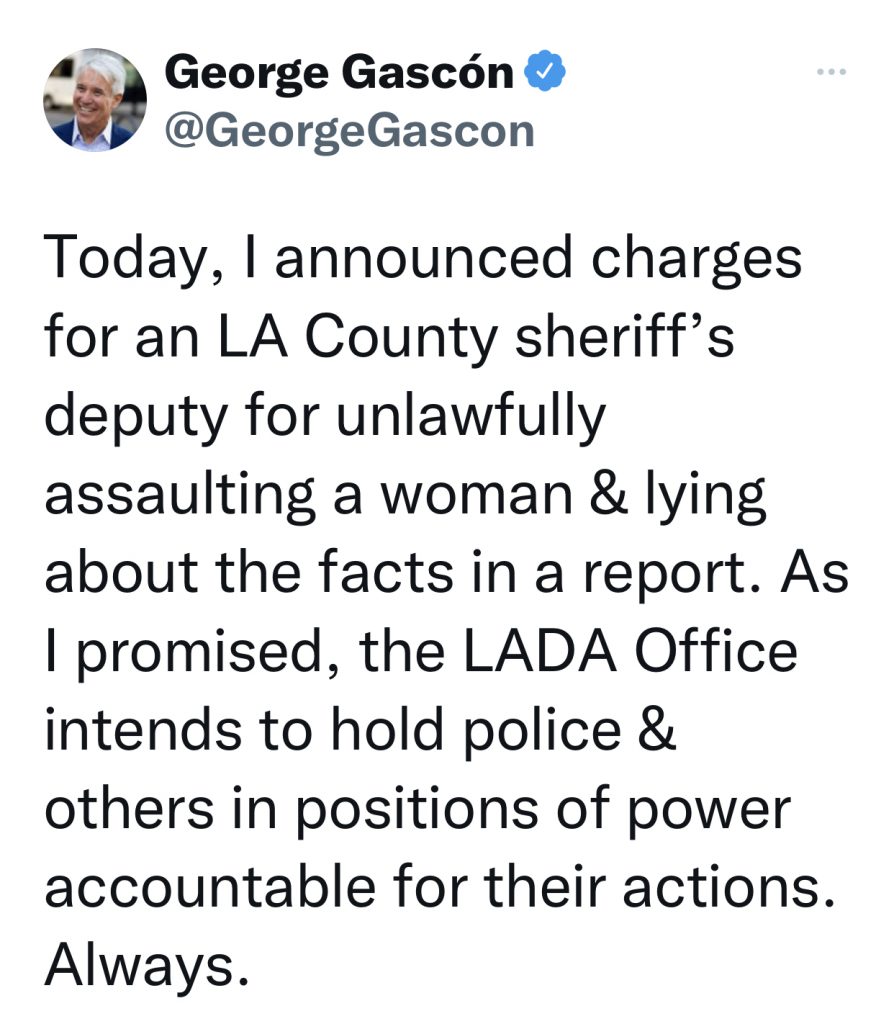 On May 4th, 2022 at 10:23 AM, DA George Gascon released a statement regarding the Thieme case and the intent to prosecute.  Thieme was booked a few hours later at 12:56 pm. 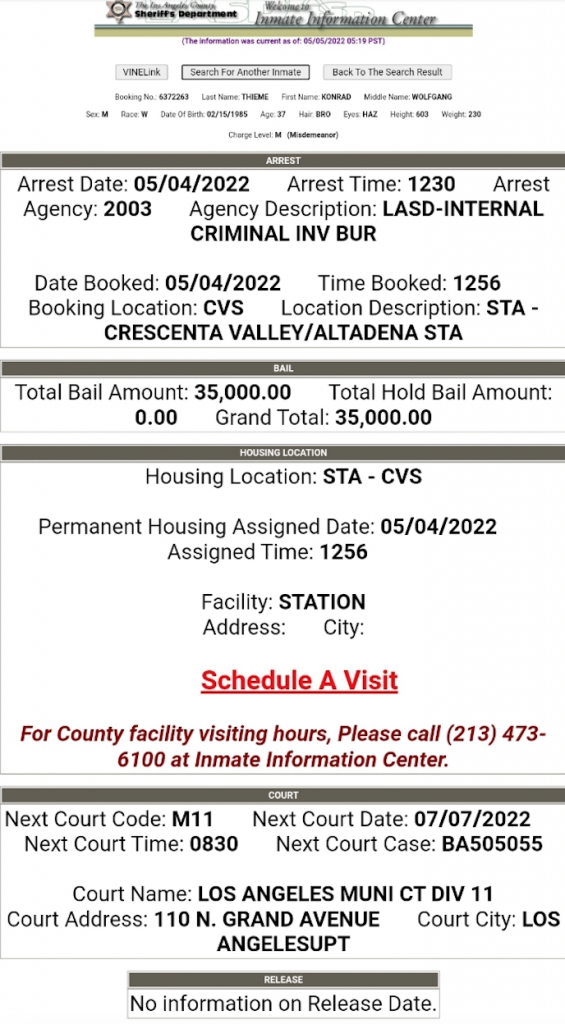 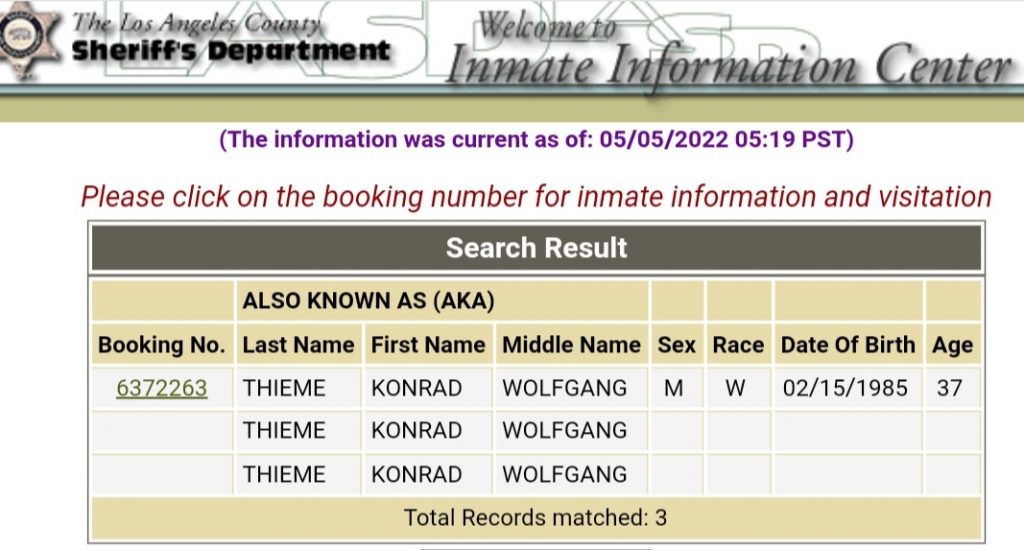 According to a complaint filed on behalf of the victim, the Use of Force incident occurred on April 10th, 2021, just one month after the alleged use of force incident that is the subject of a cover-up by Sheriff Alex Villanueva.

The victim, Sarah Jafari, 32, was banging a door against a wall in her mother’s home. Concerned for her daughter’s well-being, the victim’s mother called the Malibu/Lost Hills Station with the assumption deputies would respond and ensure Ms. Jafari was not a danger to herself.

Deputy Thieme and the two other deputies from the station arrived at Jafari’s home where, as documented on a body camera, Jafari was passive in her behavior. Deputy Thieme and deputies approached Jafari who in response, walked slowly backwards away from the deputies, with her hands held out so they could see she was of no danger of harm to them.

Completely unprovoked, Deputy Thieme suddenly throat punched Ms. Jafari who yelped in agony as she flew backward to the ground and landed on her back and head. Deputy Thieme deputies continued their assault on Ms. Jafari who was terrified yet continued to be passive, and non-resistant. The Deputies sat on victim and shocked her body with a taser, with no justification as victim cried out in intense pain.

Deputy Thieme then grabbed Jafari by the hair and violently threw her into the back of the patrol car. Jafari was taken to the emergency hospital where she was treated for the injuries caused by the deputies.

Deputies proceeded to submit a false incident report, fabricating that Ms. Jafari was somehow a threat or resisting arrest. Based on the deputies’ fraudulent allegations, Jafari was falsely arrested and thrown in jail.

Deputies then returned to the Jafari home to attempt to convince Jafari’s mother to lie and say she had told them prior to their attack on Jafari that she was armed with a knife in her clothes. Jafari’s mother refused to participate and cover-up for the deputies.

Upon review of the body cam footage, Captain Chuck Becerra alerted the executive staff at LASD of the overtly aggressive Use of Force by Deputy Thieme who was immediately relieved of duty.

Thieme was subsequently investigated by Internal Criminal Investigations Bureau at LASD where it was concluded the deputy should be referred to the District Attorney’s office for criminal prosecution. The case was submitted to the DA in July of 2021.

Thieme’s propensity for overly aggressive policing and use of excessive force led to a previous complaint filed in 2018.

In February of 2021, Thieme was one of the responding deputies to the sexual assault of a Pepperdine student. Thieme and another deputy responded to the call, engaged in victim shaming refusing to believe the victim’s account of the incident suggesting she may have been drinking or using marijuana that may have impaired her. Deputies left the scene without taking a report or asking the security guard on duty to review security camera footage.

A week later, inaction by the Lost Hills station to pursue the sexual predator who was still at large, a community member and resident of the complex reached out to me for help. I communicated with Dr. Ronda Hampton and we immediately contacted Sheriff Villanueva about the gross mishandling of the incident by the station.

After a long text conversation with Sheriff Villanueva, it was apparent he and his command staff were making an attempt to minimize the circumstances of the sexual assault by referring to the incident as lesser offense, a burglary, thereby allowing a predator to continue to terrorize the community and seek out other victims. It also emboldened deputies to continue engage in unethical and abusive behavior.

The following day, I met with the security guard at the complex and while communicating with Dr. Hampton and Sheriff Villanueva via text, additional security cam footage was discovered clearly showing the sexual predator attempting to gain access to units and committing lewd acts in the hallway. 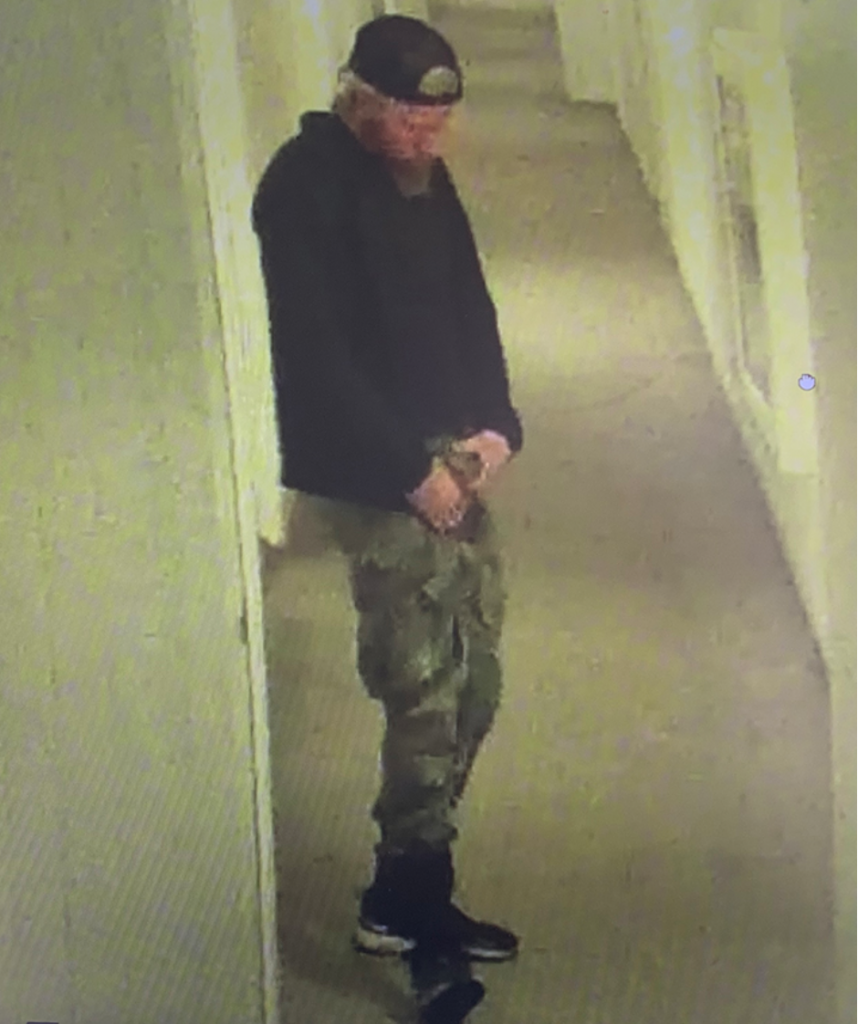 After threatening Sheriff Villanueva we would go public with the information and leak the security camera footage, then and only then, did the Sheriff finally submit to changing the alert to “sexual assault”.

At the time, the community was still recovering from the two-year law enforcement cover-up of the Malibu Creek State Park Shootings, the disappearance, death and cover-up in the Mitrice Richardson case, which included the former Captain Tom Martin admitting to concealing the video of the final moments of Mitrice Richardson leaving the station on September 17th, 2009. Martin’s confession only occurred after public pressure and four months after Richardson’s disappearance. They are the last known images of Richardson whose body was found 10 months later and only six miles from the station in a creek bed in Monet Nido.

Public trust in the department eroded following Richardson’s disappearance, her subsequent death and further exacerbated the when the cover-up in the Malibu Creek State Park Shootings was exposed.
Ultimately, it is the responsibility of the Sheriff to report any act of aggression on the part of his deputies to the public as soon as it is determined that abuse has occurred to ensure public safety and to encourage other potential victims to come forward.
The protection and covering up of malfeasance on the part of deputies, especially as egregious as in the Thieme case, encourages continued use of force incidents and other abusive behaviors.
In kind, it is the duty and the responsibility of the district attorney to remove criminals from the street expeditiously to ensure public safety.
Share this
Tags: