While the country continues to watch the election drama unfold, President-Elect Biden and VP-Elect Kamala Harris continue moving forward with the transition to a new administration despite the monumental roadblocks strategically placed by the Trump Administration.

Using the technicalities to justify their actions, Trump appointee, Emily Murphy, the head of the General Services Administration has failed to affirm that Biden won the election. The GSA, the agency that  certifies presidential transitions, has refused to trigger a process which has effectively  blocked Biden’s transition team from accessing government resources – and based on information obtained by The Current Report regarding a key member of the transition team, the stall might turn out to be a good thing.

It is certainly plausible that the Biden-Harris were unaware that the LA Metro CEO, the head of the third largest transportation agency, is under multiple Federal investigations for allegations that as LA Metro CEO engaged in Pay-to-Play, Public Corruption, Fraud, Wasted and Abuse of Public Funds, and Wire Fraud exposed by reporter Bill Melgin back in September. Counterfeit PPE exposed by The Current Report in October helped open multiple federal investigations into L.A. Metro’s involvement in the import and distribution of fake, federally regulated N95 respirators to Metro staff. If it is found that the counterfeit PPE lead to the death of multiple Metro employees, Washington could also face manslaughter charges. 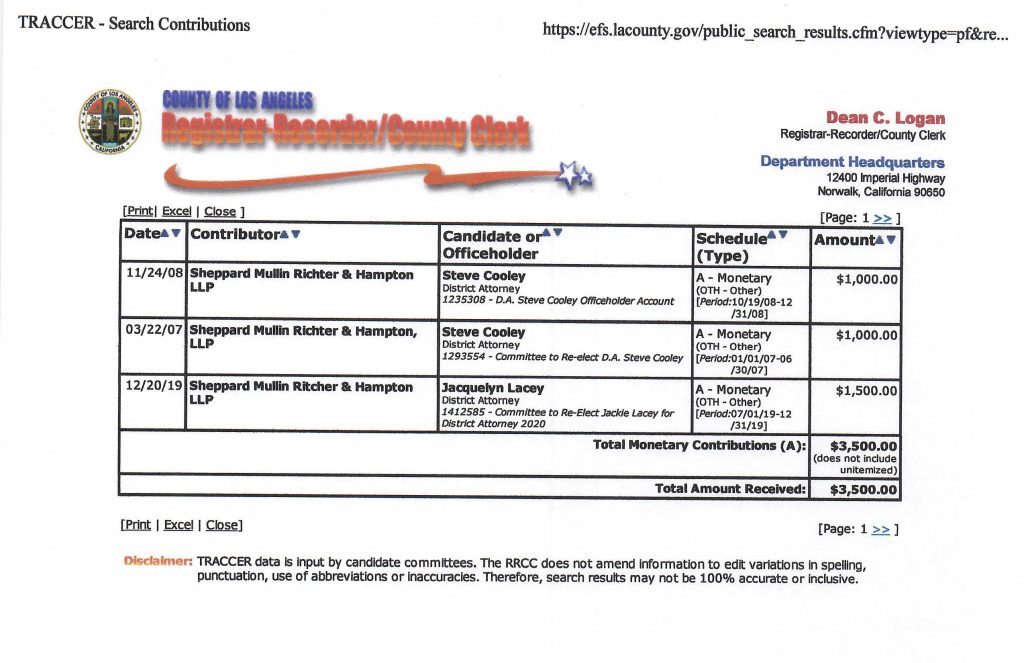 In July of 2019, complaints were filed by whistleblowers regarding Public Corruption and Pay-to-Play by L.A. Metro CEO Phillip Washington, LA Metro Karen Gorman (who is accused of stealing taxpayer funds from L.A. Metro) L.A. Metro Employees Astone Greene III and member of the L.A. County Board of Supervisors Sheila Kuehl, members of the L.A. City Council, Peace Over Violence and Civilian Oversight Chairman Patti Giggans.

Head District Attorney Joseph Esposito has acknowledged that these complaints are under review. In December of 2019, the law firm of Sheppard Mullin made campaign contributions to the Jackie Lacey for DA Campaign, approximately 45 days after being retained by L.A. Metro and Phillip Washington and New Orleans RTA CEO Alex Wiggins. 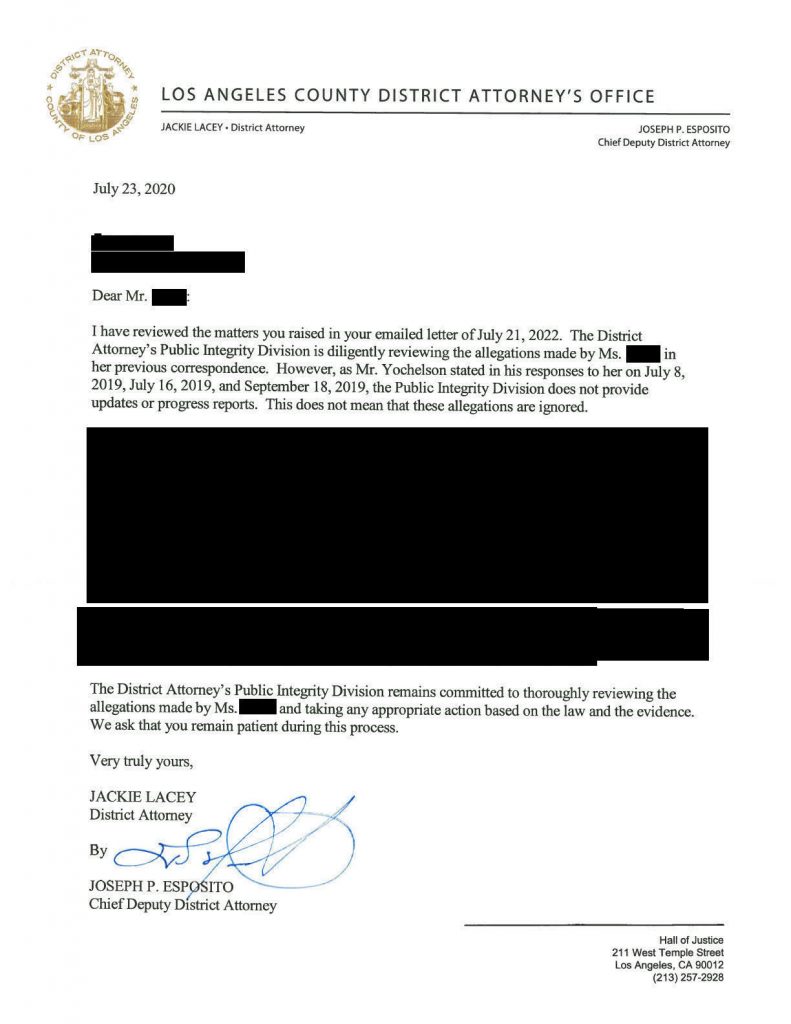 As a result, it appears the ADA Yochelson’s made little effort to investigate multiple allegations into public corruption at L.A. Metro. Yochelson has been exposed previously for his arrogance, bias and unwillingness to hold Malibu City officials accountable for their criminal activities which include alleged bribery, voter intimidation, harassment. “Yochelson is widely considered  a primary contributor to corruption in L.A. County, and he will generally cower to the pocketbooks of elected officials and not investigating public corruption in L.A. County.” Said a source who has work in public corruption for several years, “Yochelson is considered the biggest joke in the DA office.” Whistleblowers in the LA Metro case received a letter from Head ADA Joseph Esposito asking for patience. However, the DA’s office has never interviewed any of the whistleblowers in this case. 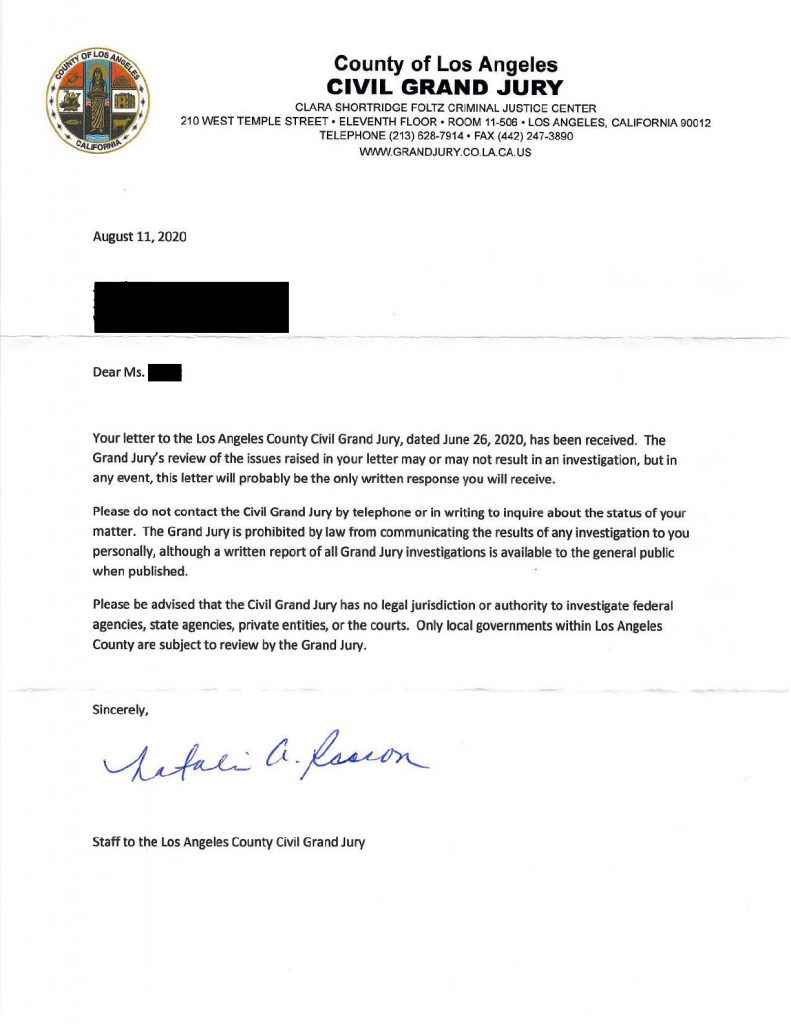 In Los Angeles, several federal investigations have been fueled by Bill Melugin’s Fox11 News story about no-bid contracts between L.A. Metro and Peace Over Violence and Civilian Oversite Committee Chairman, Patti Giggians, who is one of Supervisor Sheila Kuehl’s best friends.

According to a source who was interviewed by Federal Agents “within minutes of Melugin’s story airing on Fox11 News, the Department of Homeland Security reached out to whistleblowers to request evidence related allegations by L.A. Metro CEO Phillip Washington, L.A. County Supervisor Sheila Kuehl and Peace Over Violence and LA County Civilian oversight Commission Chair Patti Giggans.” 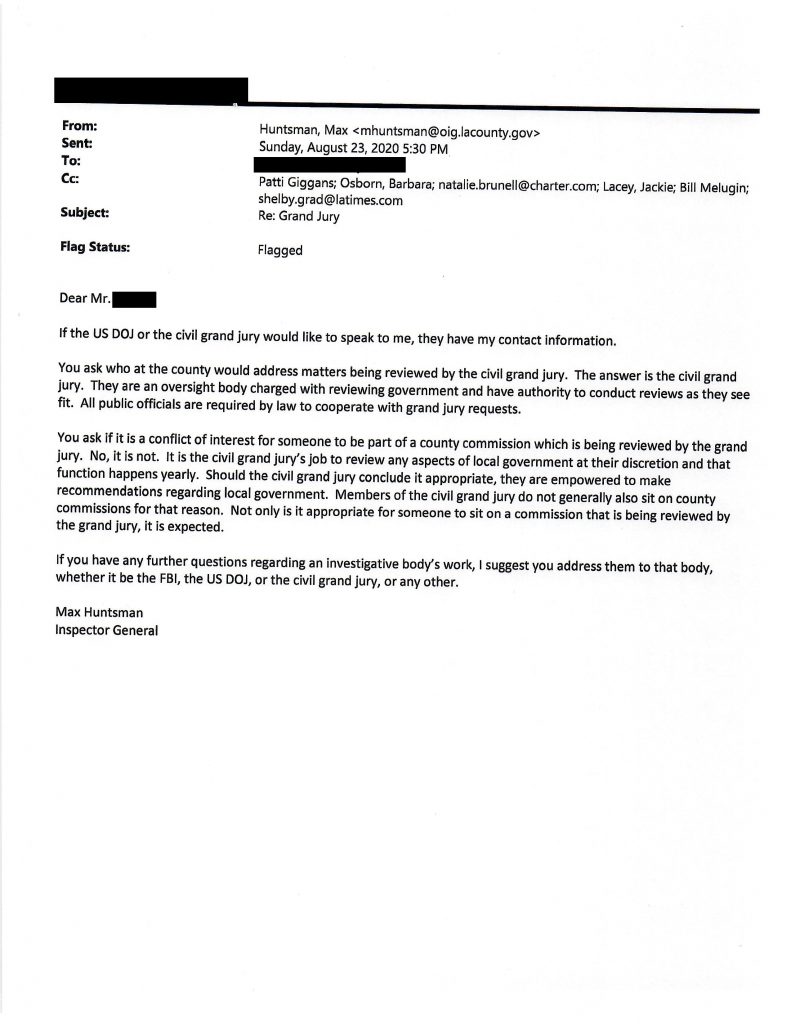 When LA County Inspector General Max Huntsman’s was asked if it was appropriate for Patti Giggans to remain on the Civilian Oversight Commission while being criminally investigated by the LA County DA’s Office Huntsman stated:

“Huntsman’s arrogance is indicative of the broader sense that LA County Officials are “untouchable” by law enforcement and prosecutors.  I work with various law enforcement agencies every day, and I can assure you that Phillip Washington, Supervisor Kuehl, and Patti Giggan’s are subject to very serious investigations. I think the task force that is looking into the criminal activity at LA Metro, LA County and at Peace Over Violence consists of 25 investigators from 5 different agencies, including the FBI taskforce that formerly investigating Jose Huzar.”

When The Current Report asked a source close to these investigations what the next six months could look like for Washington, Kuehl and Giggans, he said:

“It would be inappropriate for me to comment on information that has been shared by Law Enforcement or interactions I have had with the Grand Jury.  However, if I were Washington, Kuehl or Giggans, I would be actively be retaining a criminal defense attorney, and letting my family know that there is high probability that Grand Jury will hand down indictments.” he continued “As for Huntsman, taunting the DOJ and the Grand Jury, well, sounds like there may be a separate federal investigation in to corruption involving Huntsman. I do know it is never good if the DOJ and Grand Jury know where to find you.”

It is well known that L.A. Metro CEO Phillip Washington wants to be the United States Secretary of Transportation. However, due to the ongoing criminal investigations into Public Corruption, Pay to Play and Fraud, Waste and Abuse of Taxpayer funds, it is highly unlikely that a Cabinet appointment is in LA Metro CEO Philip Washington’s future.

“Phillip Washington could have been the example of the American experience, rising out of the Chicago projects to become the Secretary of Transportation. Instead Phil decided to take shortcuts, lie, cheat, steal and betray the public trust to get what he wanted, and now it is likely that he will be held criminally accountable” concluded sources close to the investigation.

According to the Build Back Better, the official Biden-Harris transition website, Washington continues to hold a key leadership position while the agency he in charge of, L.A. Metro, continues to fail its employees and the public at large. L.A. Metro has yet to notify employees of the counterfeit PPE, discovered in April at the beginning of the pandemic and could possibly be linked to the deaths of at least three employees who contracted COVID19. Additionally, L.A. Metro has yet to publicly address multiple faulty PPE equipment in their inventory – possibly still in circulation – distributed to the over thousands of employees and public at large whose use L.A. Metro services.

As government officials grapple with COVID numbers spiking exponentially, the Biden-Harris appointment of Philip Washington as Team leader for Public Transportation is a disappointing and controversial choice to say the least.

The Biden transition staff did not respond to requests for comment.