The civil uprising associated with George Floyd’s death by a Minnesota police officer, and the on-going protests nationwide, have bolstered the Cancel Culture movement (a form of on-line group shaming) against law enforcement significantly since May.

The movement’s focus, picked up speed this past weekend, lead by  millennial-driven political activist site KNOCK.LA who set their sights specifically on the Los Angeles Sheriff’s Department.

KNOCK.LA, who hesitantly supported Sheriff Villanueva during his campaign, released a particularly venomous article August 1st, reporting the department hosted a “raucous mask-off party” for “themselves” with a guest list of more than 100 people Friday night at the Hollywood bar Sassafras Saloon.

The party was in full swing as the site released the “Breaking News” story on their social media platforms alleging the Los Angeles Sheriff’s Department was violating public health directives by “hosting” an event at the venue. The allegations made by KNOCK.LA provided no evidence to support the claims LASD was in fact hosting the party, or if the guests were positively identified as employees of the Sheriff’s Department. 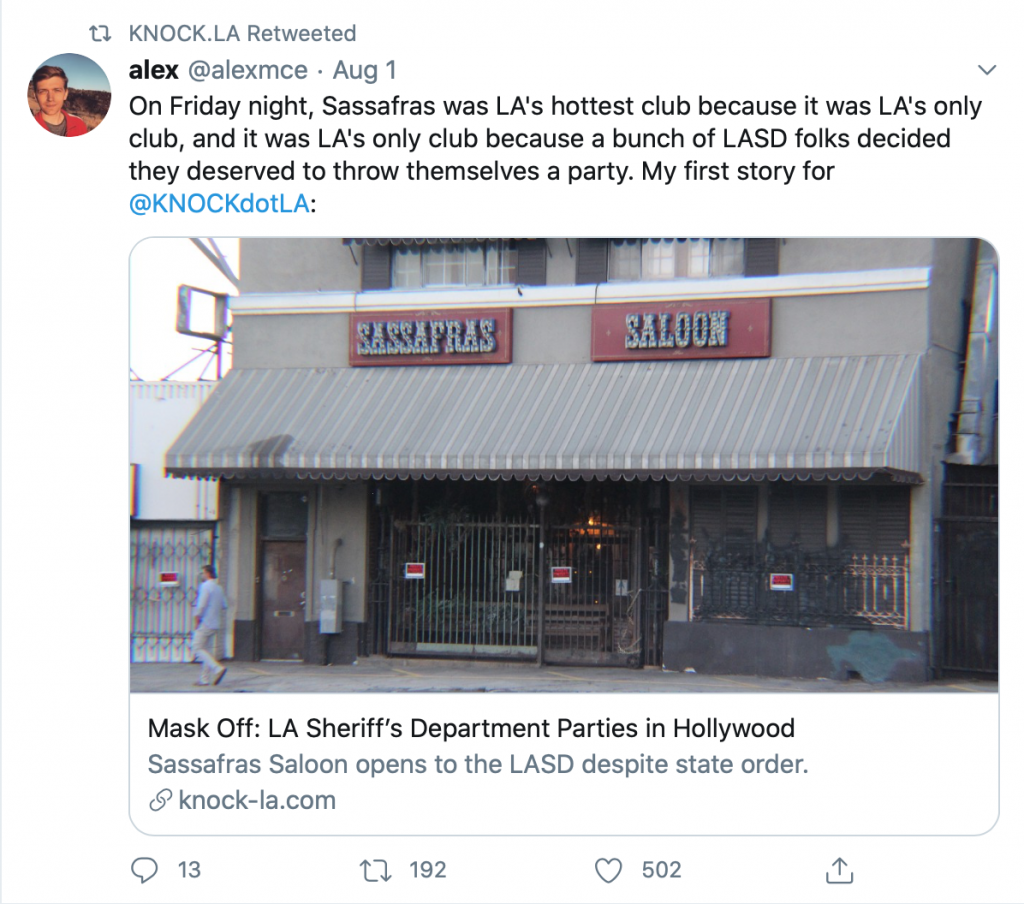 Simultaneously, a KCRW affiliated reporter “acting on a tip” posted on her personal twitter account that she “captured photos of deputies drinking on the street, littering, and no one had a mask”. No photos accompanied the tweets identifying members of the Los Angeles Sheriff’s Department, or the acts they were committing. The Current Report contributor Ronda Hampton reached out to the KCRW reporter requesting photos describing the events she reported Friday night identifying members of LASD. At press time Hampton received no response from the reporter for the photo request. 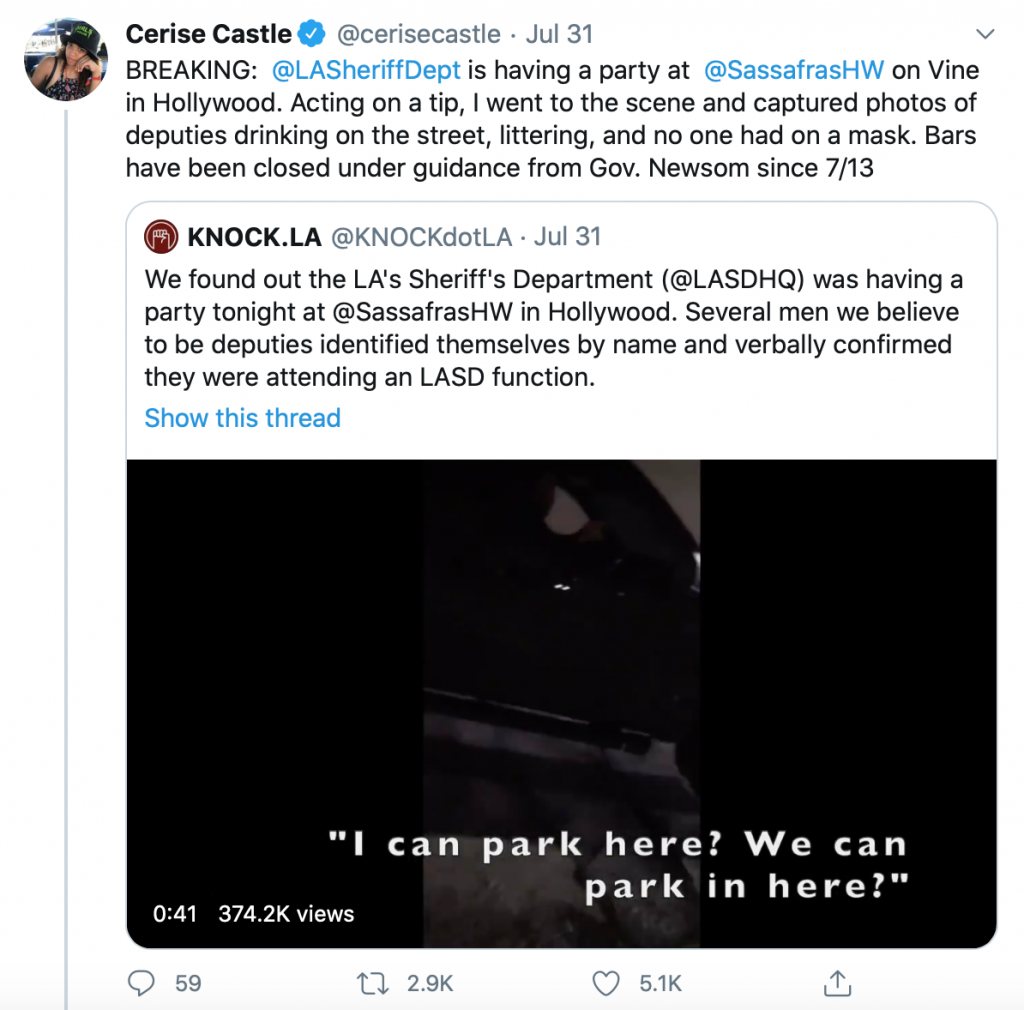 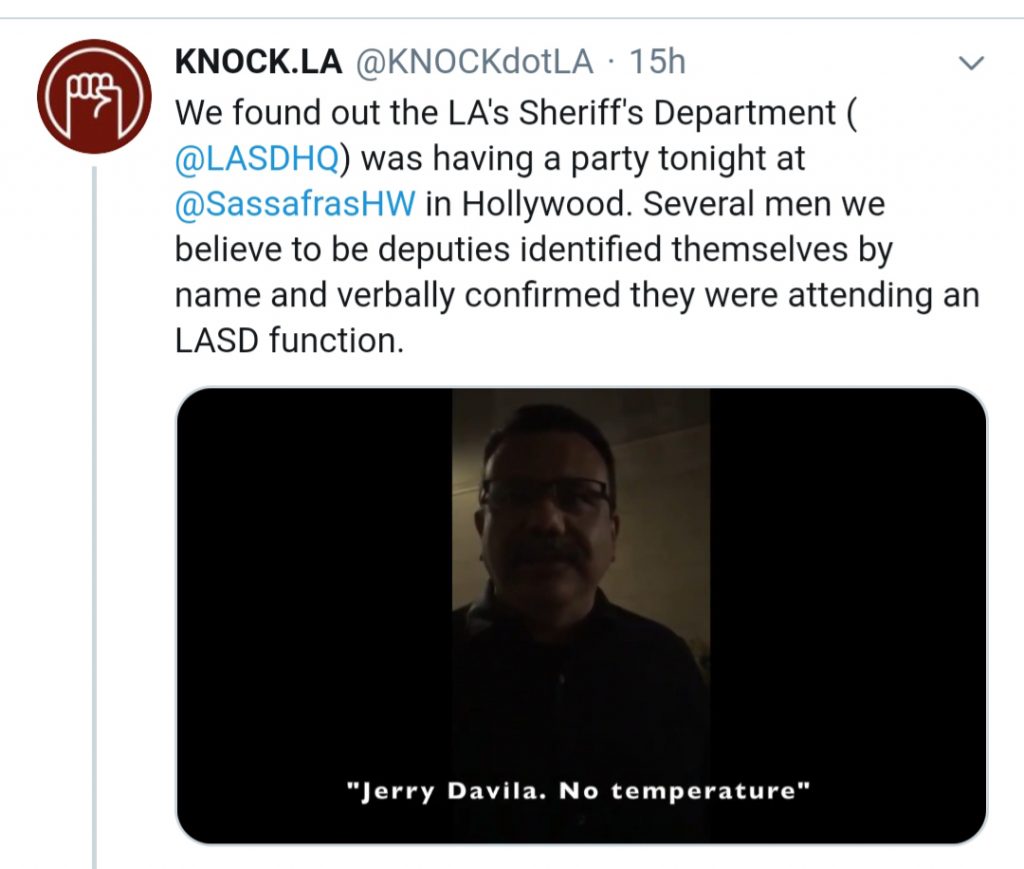 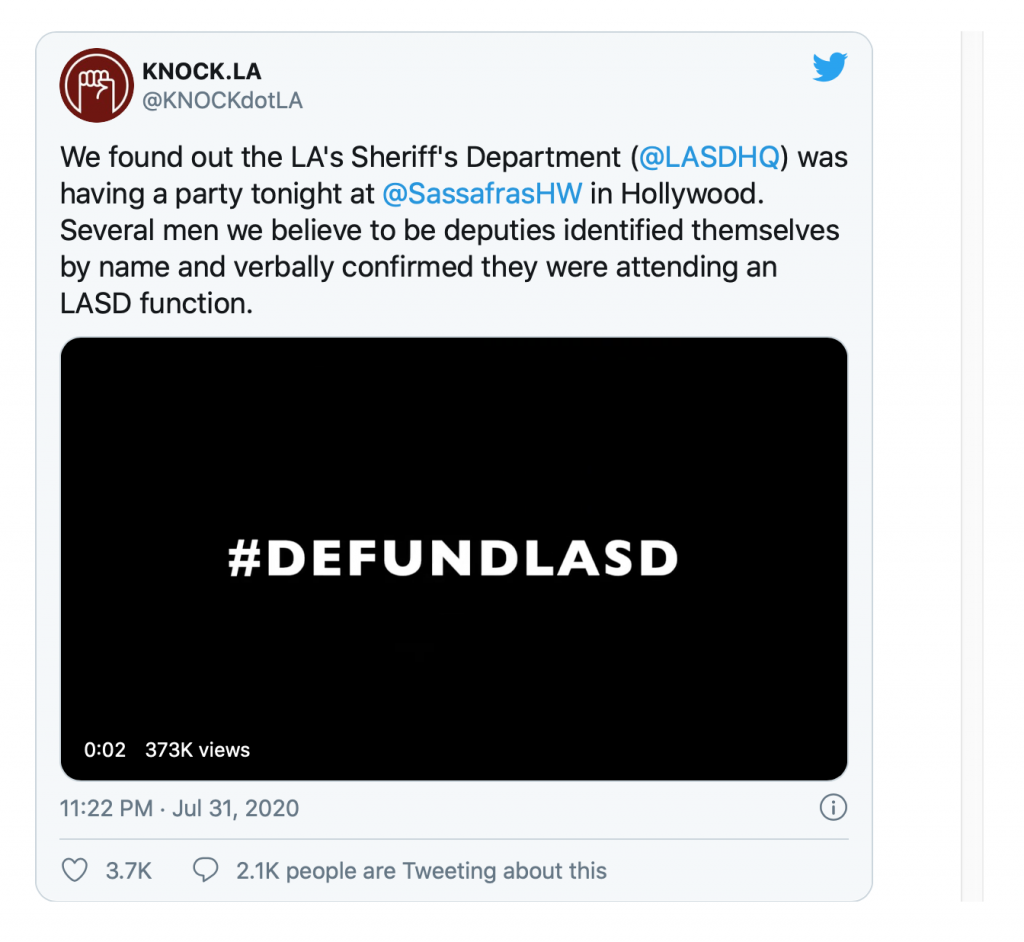 A video uploaded online and produced by KNOCK LA shows guests arriving with an unknown individual (off-camera) stationed at a back entrance identified as a “contractor” for the event, asking a lead-in question: “Are you here for the LASD Party?” Attendees in the video said “yes”, however, it was verified by the establishment’s owners who told Eater LA on Saturday Aug 1st, “the party was not a booking by the Los Angeles Sheriff’s Department, and cannot confirm whether LASD were present. Any claims put forth on social media are not substantiated, as we have no evidence that LASD individuals were at the event.”

Requests were made to the individuals in the video by The Current Report contributor Ronda Hampton asking to verify employment, went unanswered. However, further investigating online led to the #LAPCFails Twitter account (and later also verified by CNN) who identified two of the men in the video as members of the LAPD Southwest Division and further substantiated the findings in the thread linking to an LAPD roster. 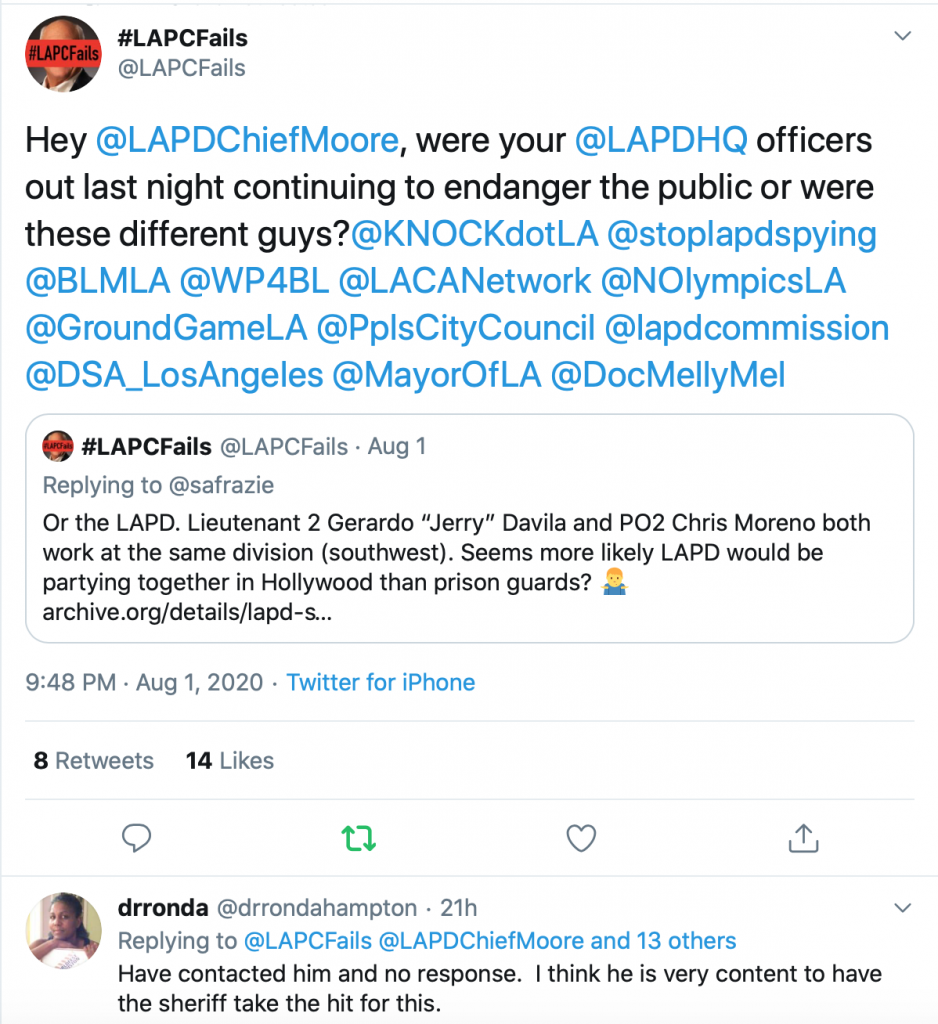 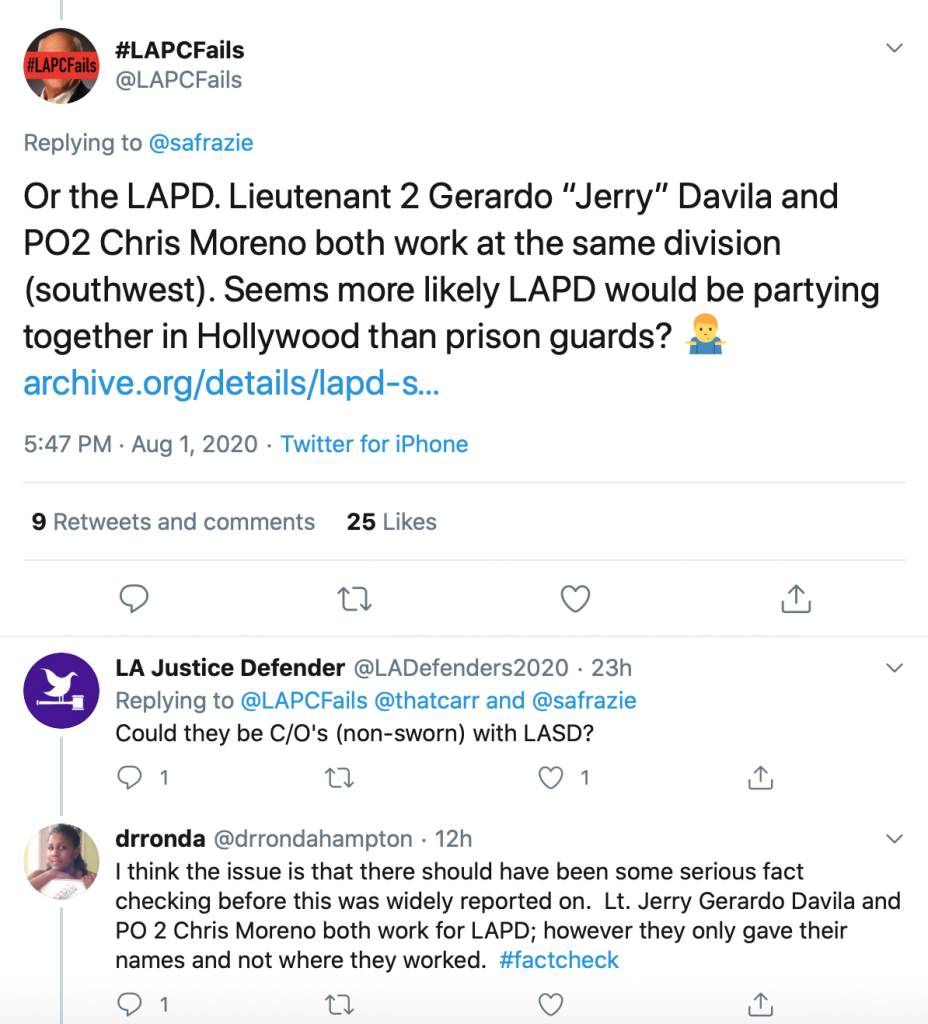 Sheriff Alex Villanueva released a statement the day after the event:  “The persons identified in the video are not employees of the Sheriff’s Department and this event was not hosted or sanctioned by the LASD. As soon as we became aware of allegations of deputies attending a party in violation of health orders, we initiated an inquiry in an attempt to validate the information or misinformation. If further details are discovered and action is warranted, we will take appropriate administrative action.”

According to the KNOCK.LA “Mask Off” article, the author contacted an LASD Public Information Officer to verify the information about the event and indicated the following quote came from LASD: “We are unaware of any sanctioned parties that were occurring in the Hollywood area on Friday and I can’t comment any further at this time.” However, when The Current Report inquired with the Sheriff’s Information Bureau regarding the quote, LASD was unable confirm, if at all, the quote actually came from their department.

The response to the misinformation disseminated by the media and distributed on social media platforms led to angry responses from citizens about the event at the Sassafras Saloon Friday night:

CLEAN UP, CARRY ON

The aftermath of the party left the neighborhood demanding answers, including who was behind moving the homeless encampment in front of the Sassafras Saloon just in time for the event.

Community members told FOX 11 news they have been trying to get the encampment moved for months with no success and were shocked to see it moved and even more disappointed to see the action affiliated with an event that violated Public Health orders. 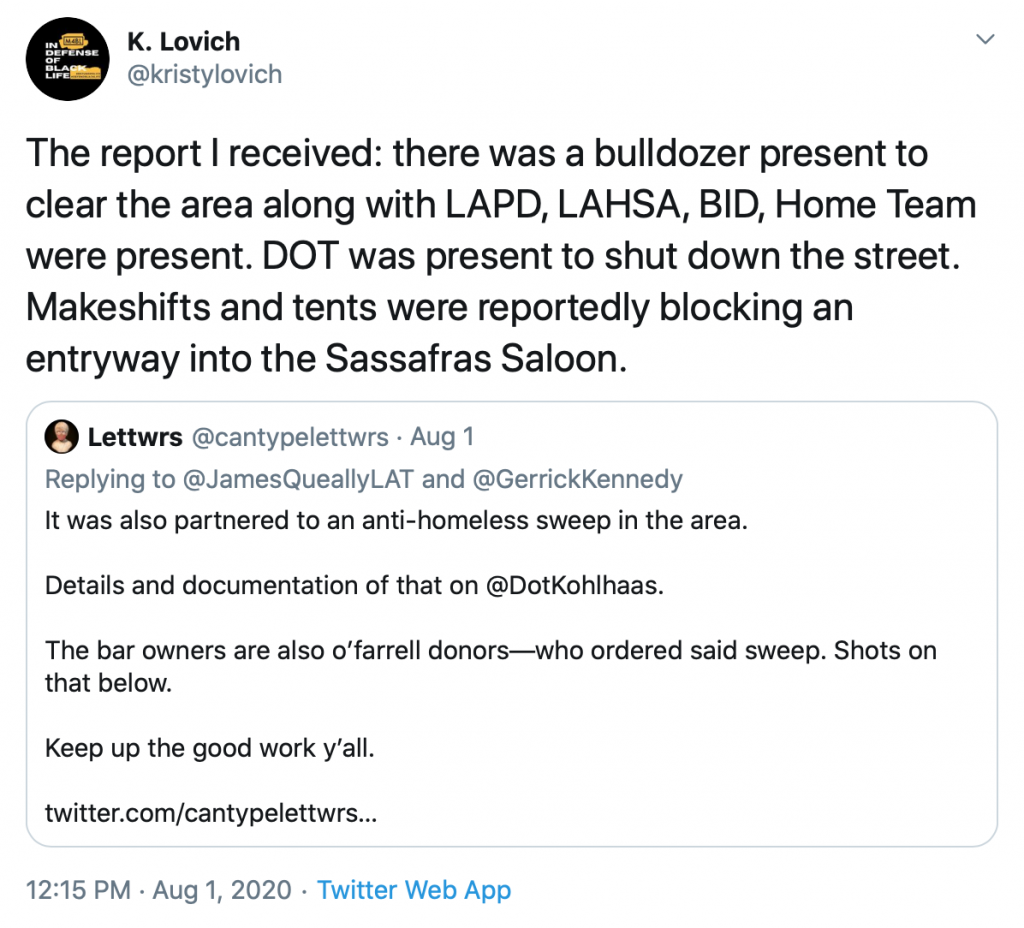 The KNOCK.LA “Mask Off” article implicated LASD was responsible for the clean-up, that too was incorrectly reported.

As reports of the party were picked up by numerous media outlets, the LA Times, who has been a champion for the Board of Supervisors in their war against Sheriff Villanueva since he took office in January, 2019, stayed true to their agenda when reporting reporting on this event. The original article uploaded at 2:00 pm used strong language against LASD and quoted the KCRW reporter’s tweet identifying “deputies drinking and littering in the street with no mask”, engaging in spreading gossip rather than doing their due diligence and fact-checking the accusations. The story was edited again five hours later with a more softened tone.

The Current Report reached out via Twitter early Monday morning to LA County Public Health to determine if penalties will be imposed on the Sassafras Saloon for hosting an event against the Governor’s Public Health Orders. 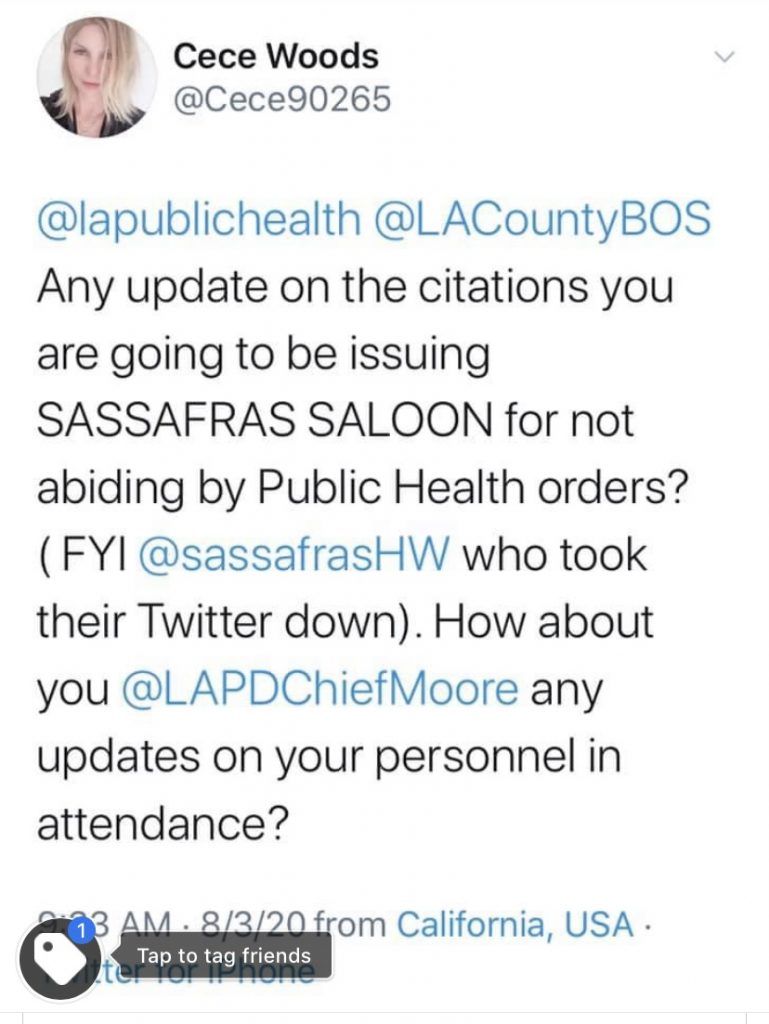 Director of Public Health Dr. Barbara Ferrer made a statement at her press conference there will be an investigation into this event and there is “zero tolerance” for indoor parties.

Meanwhile, the KCRW affiliated reporter who originally broke the story (along with KNOCK.LA), as of Monday, continues driving the narrative putting responsibility squarely on LASD and supporting the County’s continued power struggle with the Sheriff.

KCRW released an article on their site Monday, three days after the “Breaking News” event, but not before their reporter backtracked quite a bit of information, contrary to what was released on her Twitter account over the weekend. The KCRW reporter remains firm on her stance that this was LASD’s party despite CNN’s report (also on site when the event occurred) confirmed LAPD and family members was the first responder agency in attendance.

At press time there are no photos, documents or any evidence confirming LASD employees attended the event. 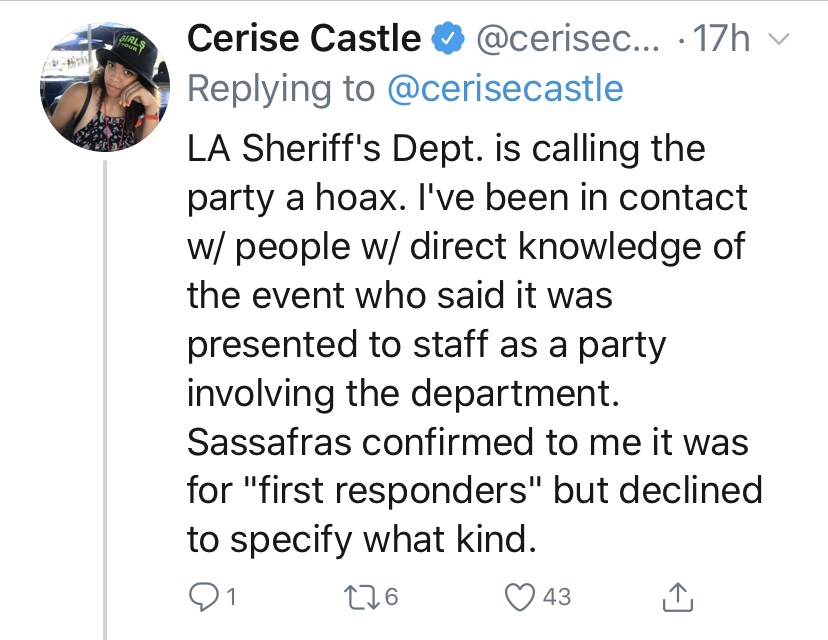 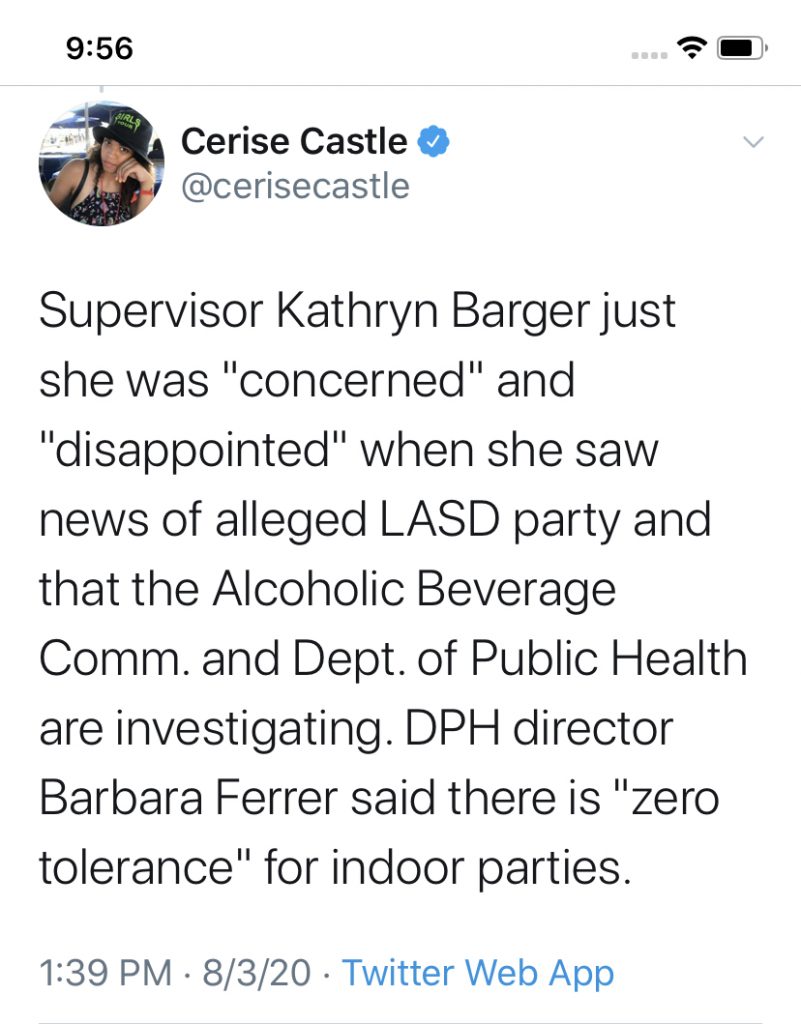 KNOCK LA‘s “Mask Off” article leads into the “Cancel Rent” movement associated with the Coronavirus related closing of businesses, lay-offs and rising unemployment.

In the article, although the focus was the “party for LASD” against public health rules, the author mentions the impending “tsunami of evictions”, while a colleague on the same site reports the evictions slated to begin Sept. 1 will be “violently enforced” by LASD. 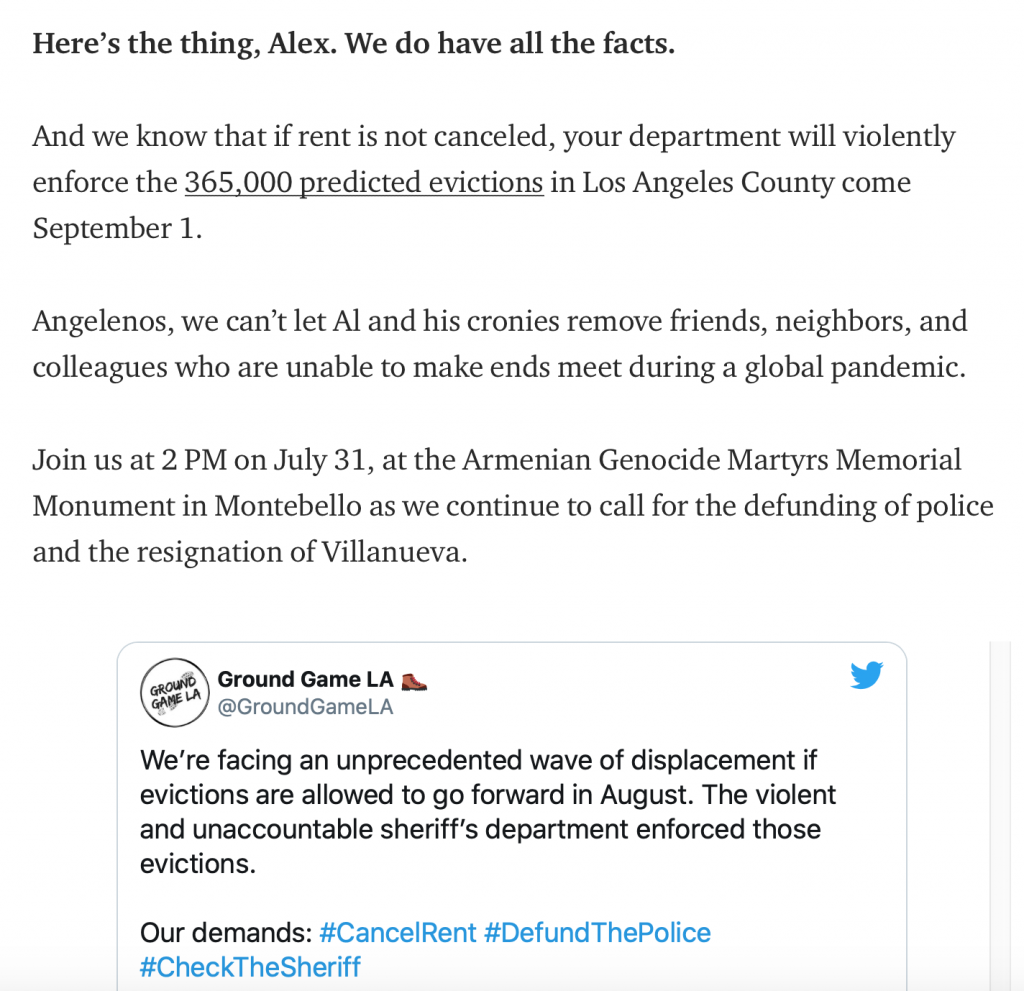 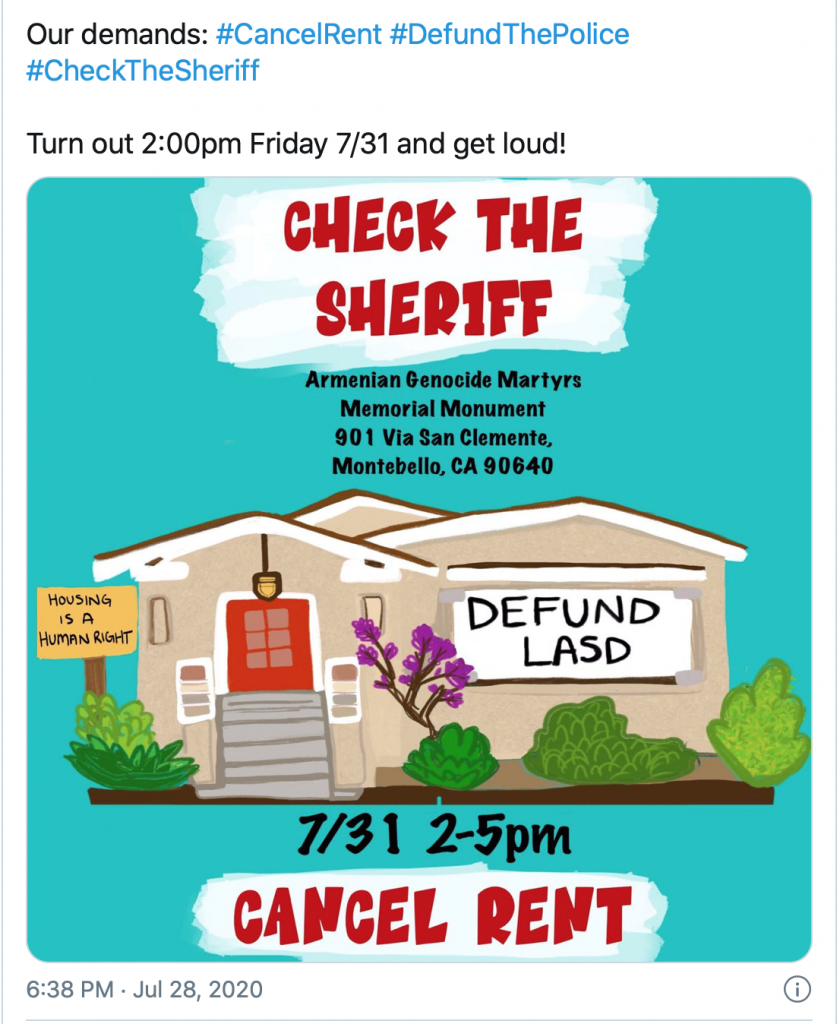 The Current Report contacted the Sheriff’s Department Information Bureau and confirmed there is no such enforcement in place as stated in the articles on KNOCK LA and released the following statement: “The LASD is not currently conducting any COVID-19 related evictions. In addition, an eviction will only be conducted and enforced pursuant to an order of the court.”

As evidenced in the media’s reporting of this event the last few days, there is a serious, intentional disconnect with the truth.

This story was a missed the opportunity to highlight the importance of the Sassafras Saloon and any other establishment failing to comply with the Governor Newsom’s Health Orders during a global health crisis.

LA COUNTY surpassed over 500,000 cases of COVID, the highest in the nation, as Public Health Director Barbara Ferrer expressed deep disappointment in Friday night’s private event at the Sassafras Saloon “Whether it’s a private or public party, you’ve potentially created a lot of exposures and the possibility that it moves into the community,” said Ferrer said in a press conference. 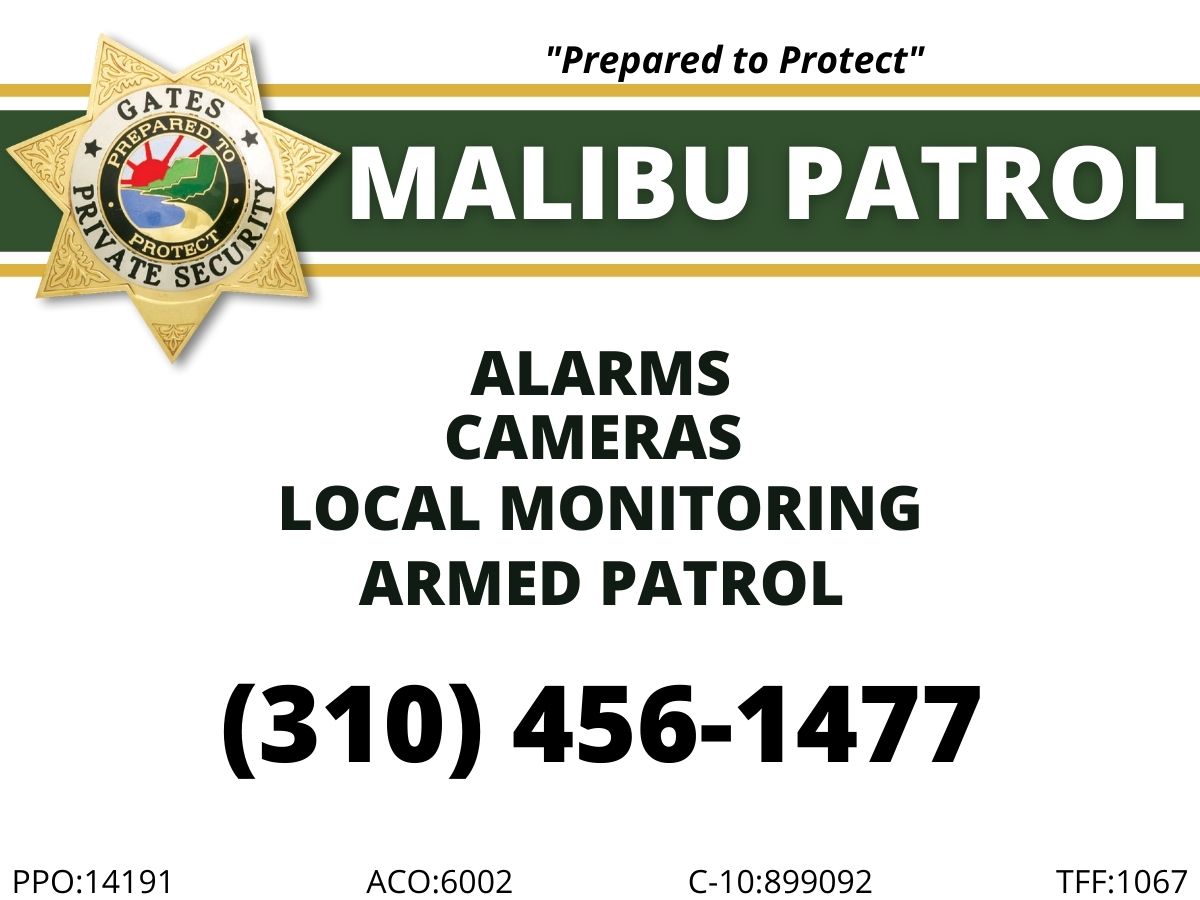