Editor’s Note: It was a long agonizing 11 months before family, friends and the Malibu community, ultimately learned the fate of Mitrice Richardson, who had gone missing after the Malibu/Lost Hills Station released her shortly after midnight on September 17th, 2009. Richardson had no car, cash, cell phone, or any other means to get her to safety.

The troubling details surrounding her arrest, her time at the station and her subsequent disappearance, are the subject of a clue-driven, on-going investigation.

On August 9th, 2010, Mitrice Richardson’s body was discovered by State Parks Rangers on a creek bed in Dark Canyon, just a mere 1.5 miles where she was allegedly last seen. Activist Ronda Hampton, who was close to Richardson, has spearheaded the decade long journey for justice and finding those responsible for Mitrice’s death. Hampton, a contributor with The Local Malibu, reminisced about the day Mitrice was found, and the extraordinary efforts by individuals to usher those close to her to the very remote spot where her body was found to honor and memorialize her.

“It was August 9th, 2010 and I was just leaving a lunch date with my husband and daughter when I received a text message from Tashaka Starwell who was a volunteer with the Los Angeles County REACT (Radio Emergency Associated Team).  The REACT  Team is a volunteer organization that provides public service communications to individuals, organizations and governmental agencies in an effort to protect and save lives.  In the message Tashaka stated that rangers had discovered partially mummified human skeletal remains in the Monte Nido area. Concerned that it might be Mitrice Richardson, he met myself, Latice Sutton (Mitrice’s mother) and Lauren Sutton (Mitrice’s aunt) at the area which was used as staging for the media who was there to cover the story. 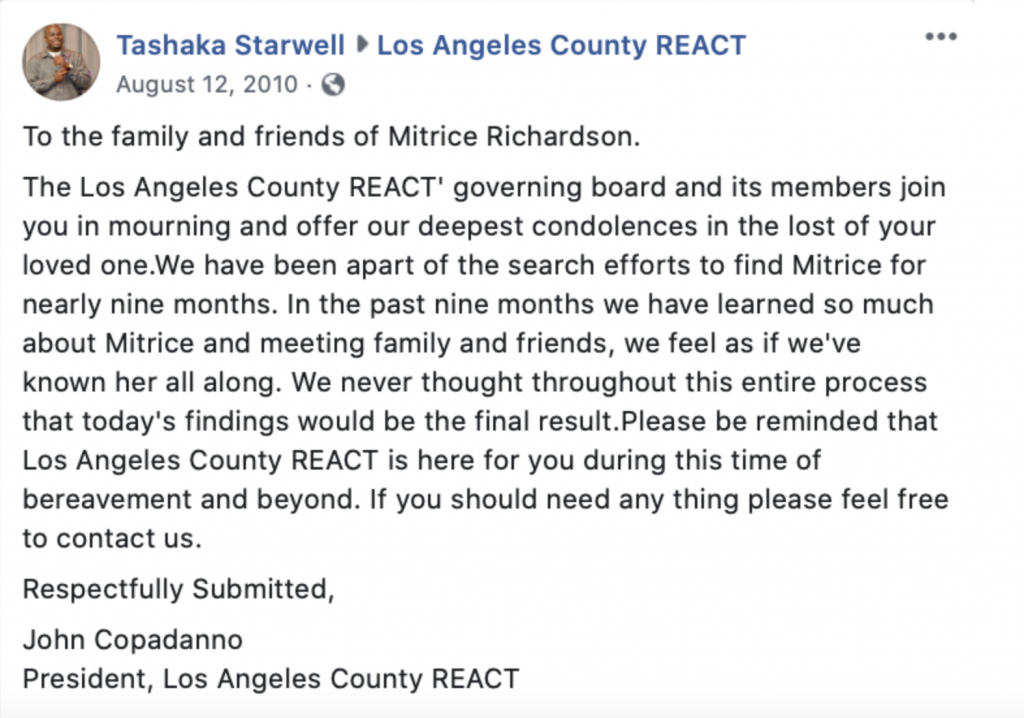 We met Tashaka Starwell early on in our search for Mitrice as he and his team had been very helpful in setting up searches and teaching us the ins and outs of mountainous searches, so it was rather serendipitous that he was monitoring the radio on the day her remains were discovered. When we arrived at the location at approximately 3pm,Tashaka was already there to greet us and explain what was going on. Tashaka ensured that we understood all that was occurring at the site and served as a liaison between us and law enforcement.

“I can still remember the anxiety of that day 10 years ago and I will never forget how overwhelming it was knowing that the body that was discovered on August 9th, 2010 was that of  Mitrice Richardson.”

Chip Croft was also there at site on the day Mitrice Richardson’s remains were discovered.  Chip had already volunteered hundreds of hours in searching for Mitrice, talking to community members, speaking at council meetings and often times offering comfort during the long endless searchers and flyer distributions. When it became clear that we needed more media coverage to encourage more searchers to volunteer, Chip began video taping our efforts and uploading them on social media to inform the public of the circumstances of her missing status. Eventually that video footage was compiled into a documentary, Lost Compassion, which chronicled our search for Mitrice.

I can still remember the anxiety of that day 10 years ago and I will never forget how overwhelming it was knowing that the body that was discovered on August 9th, 2010 was that of  Mitrice Richardson.  While there was some relief in knowing that she was no longer alone in the canyon, the pain that she was gone was almost unbearable.  My memories of the pain of that day are often softened by knowing that complete strangers like Tashaka and Chip were so concerned about the life of someone they did not even know that they would devote endless hours in an effort to bring her home.
As efforts continue to fight for justice for Mitrice and find those responsible for her death, I have to remember that there are good people in the world like Tashaka, Chip and countless others who devoted so much time and energy in seeking justice for Mitrice. I have to remember that Mitrice’s life touched many people in the most positive of ways and that her life had and has meaning.  I have to remember these things so that my view of human nature is not tainted by the instances of negativity of the situation but focused on the overwhelming amount love that has been shown to Mitrice, even now, ten years later.”
Share this
Tags:

Diary of Dismissal: How A High Profile Sexual Assault Case of a Pepperdine Student Took a Turn for the Worse – Gascon Takes Plea Deal Despite Green Light to Move to Trial