The 10-year anniversary of Mitrice Richardson’s disappearance and the press conference held outside the Lost Hills Sheriff’s Department Tuesday, September 17th, produced some very deep emotions, as well as an unexpected reaction from Sheriff Villanueva, in the very spot where Mitrice Richardson disappeared a decade ago to the day.

The press conference was called to celebrate Richardson’s life and ask for the public’s assistance for more information regarding the circumstances surrounding her death, and re-establish that the $30,000 reward is still active.

In Pursuit of Justice?

Sheriff Alex Villanueva attended the September 17th press conference at the request of Dr. Ronda Hampton, a licensed clinical psychologist and close friend and mentor to Richardson, who has been spearheading the search for her killer since 2009.

Villanueva, recently attended at a private event to celebrate Richardson’s life also hosted by Dr. Hampton on September 7th, where he offered significant details as to the next steps in the Richardson case:

“I like to purse the truth and I like to get to the bottom of it”, ” I want to assess the entire case from the beginning with a fresh set of eyes. And that means we’ll go back, we’re gonna canvass, we’re going to walk the entire length of it.” 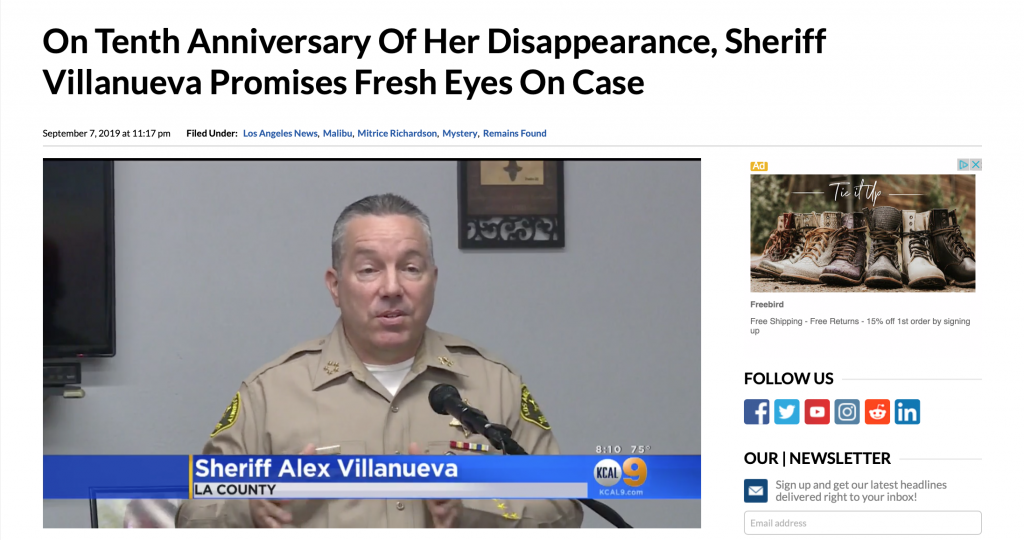 Sheriff Villanueva’s speech at the Sept. 7th memorial event was covered on local news stations, immediately re-invigorating the case that has been dormant for at least 9 years. Tips started coming in as the Sheriff’s speech aired on local networks supporting the re-investigating of the case and the need for an Anonymous Tip Line.

“I was honored that Sheriff Villanueva attended the Celebration of Life event on September 7th and was unexpectedly surprised when he talked about the next steps he was going to take regarding Mitrice’s case.” Dr. Hampton said in an exclusive interview with The Local Malibu after the press conference.

“I was also meet with a renewed sense of optimism when I began receiving phone calls immediately after the event from individuals who wanted to share information. This prompted me to request the Sheriff to attend the September 17th press conference to appeal to the public to come forward with information and to reiterate the reward. Unfortunately, the press conference did not quite go as expected, however, we had already started generating more leads based on the Sheriff’s initial commitments made on the 7th. I decided at that point that a tip line was vital in gathering more information. There is a trust issue that has prevented people from going directly to the LASD, and the tip line would allow me to effectively monitor tips to hand over to detective’s overseeing the case.” 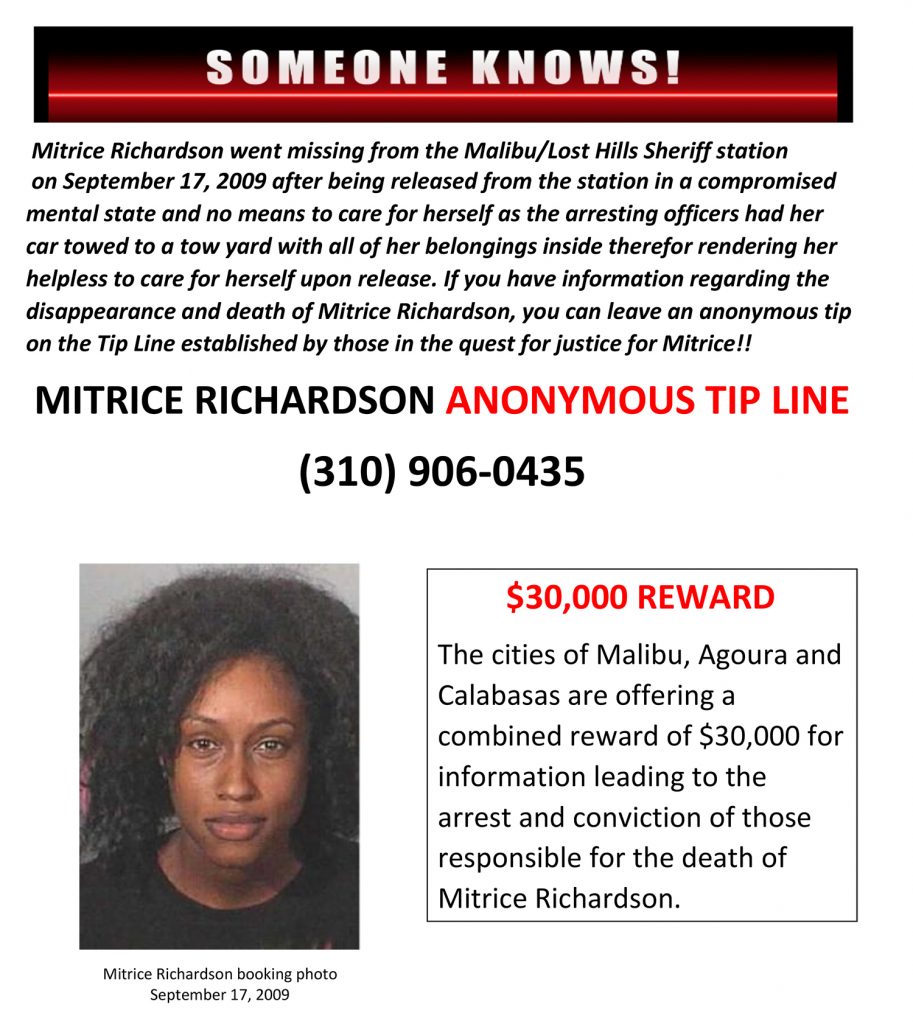 While Tuesday’s press conference produced confusion in the status of the case Sheriff Villanueva communicated one important fact that still remains; “A homicide investigation is never closed” and Richardson’s cause of death remains currently still remains undetermined, according to the coroner’s office.

At the Sept 17th press conference, Sheriff Villanueva discussed positive changes in policies and protocol based on the way Richardson’s case was handled.

LASD policy now is to make sure detainees cell phones, wallet and personal items are returned before they are released from custody. At the time of Richardson’s release, her wallet and cellphone were still in her vehicle that was impounded after she was arrested. Richardson was released from the Lost Hills Sheriff’s Department in a compromised mental state without any means to get to a safe place which Villanueva vowed will never happen again under his watch.

The Sheriff’s Department will now have the Mental Evaluation team assess new inmates who display signs of mental illness as Richardson did the night she was taken into custody after failing to pay her $89 tab at Geoffrey’s restaurant.

The Power Remains with the People

Blindsided by Villanueva’s pivot in the case since his speech at the September 7th event she hosted, Dr. Hampton communicated her extreme disappointment at the press conference after Sheriff Villanueva spoke.

“I acknowledge the policy changes, and appreciate that he came here today,” she said. “But the reports he cited were compiled by a corrupt sheriff’s administration, she said, and there’s evidence that now-retired people at the Lost Hills station lied.”

In spite of the recent backtracking by Sheriff Villanueva, Dr. Hampton is optimistic with the new information received resulting from the news coverage of the Sheriff’s initial speech on the 7th.

There is a renewed optimism among Richardson’s family and friends, not to mention the case has been rejuvenated on may levels bringing important attention to Dark Canyon and the surrounding areas.

Recent events, including the murder of Tristan Beaudette, the disappearance of Elaine Park and Matthew Weaver Jr. have brought much needed global attention and has inspired people to come forward with important information and the power of social media, and the internet is an integral part of bringing justice to the Richardson case.

With the newly established Tip Line, Richardson’s family and friends are hoping the community will come forward once again to bring the killer or killers to justice.

WE NEED YOUR HELP. If you have any information in the death of Mitrice Richardson, please call 310.906.0435.  All calls will remain anonymous.