Per inside sources, it appears obstruction of justice charges may be looming over top executives at the Los Angeles County Sheriff’s Department who have been in contact with FBI agents in regards to suppression of evidence, conspiracy and prevention of prosecution of a felony assault committed by a deputy sheriff under the color of authority.

Sources told The Current Report the FBI received an anonymous tip on the dedicated police line regarding the corruption in the use of force case leading to an immediate response by federal investigators.

Yesterday, Sheriff Alex Villanueva announced he intends to seek criminal charges against the whistleblower in the department who leaked the video resulting in the exposure a massive cover-up leading to sweeping changes at the executive level, including relieving Assistant Sheriff Robin Limon and Division Chief Lajuana Haselrig of duty pending investigation.

The deputy use of force incident occurred on March 10th, 2021 as the country was reliving George Floyd’s death through the lens of the trial of officer Derek Chauvin, whose actions led to Floyd’s death igniting a monstrous civil uprising around the country and protests around the world.

On the same day of the Chauvin’s trial, less than a year after the Floyd video and Chauvin’s actions which triggered swift defunding of law enforcement in many states across the U.S., LASD deputy Douglas Johnson was caught on video using the exact same use of force by Chauvin which led to Floyd’s death, kneeling on the head of inmate Enzo Escalante. Another inmate, Roger Ortiz, was also involved and subsequently both were subdued by deputies using physical force.

Standard protocol for a deputy sheriff using unreasonable force would be to immediately relieve him of duty from dealing with the public in the field, or inmates in the jail and investigated by ICIB. The incident occurred in March and allowed the deputy to continue to have contact with inmates and the public for an additional eight months, risking additional events.

While the incident immediately initiated a standard department process of review, Sheriff Villanueva vehemently denied knowledge of the incident until November, 2021, and only after the video was leaked.

Multiple inside sources confirm Villanueva had full knowledge of the incident and the video immediately after it occurred as there was potential for a PR nightmare of catastrophic proportions and therefore the need to suppress any information about this case from reaching the media.

According to inside sources, the chain of custody regarding the transfer of the video began with Division Chief LaJauna Hasselrig, who hand-walked it straight to the office of the Sheriff on 8th floor at the Hall of Justice. The video was then played for top executives including Sheriff Villanueva, Undersheriff Murakami, Assistant Sheriff Robin Limon and the Sheriff’s aide Lt. Tony Blanchard with Hasslerig in attendance.

From there, a series of highly unusual orders were put in place by Villanueva to separate the inmate incidents with the plan to bury criminal charges against the deputy and the inmate, in turn eliminating the need to turn the video over to the DA’s office (as no charges were being filed). As a result of those orders, the video was able to be kept in the sole possession of the Sheriff’s Department, never to become public record.

Fast forward to July 2021 when the administrative review of the officer’s actions landed on the desk of Commander Allen Castellano, whose actions were instrumental in unravelling the cover-up of the use of force by Deputy Johnson.

In his report, Castellano highlighted the incestuous handling of the investigation by the department. Castellano then sent his finished review to his Chief LaJauna Hasselrig who, following the Sheriff’s orders, buried the review. 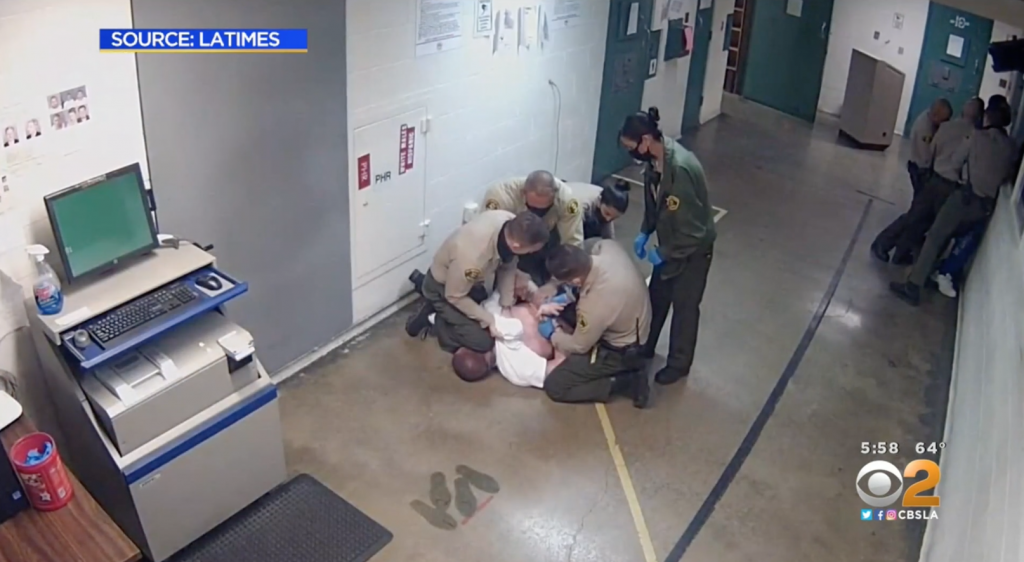 Castellano was subsequently disciplined by Villanueva quietly and it wasn’t until the video was leaked last month that the shake-up at the exec level was “necessary” according to Villanueva after his executive staff “disappointed him” in how they handled the incident.

The disciplinary action of Assistant Sheriff Robin Limon and and Division Chief Hasslerig sent  shockwaves through the department and a resounding message that no one, not even loyalists to the Sheriff, will be spared.

This is a breaking news story and will be updated as information becomes available.