The commentary by the Sheriff, including his statement released on Twitter, enraged high-profile missing persons and mental health advocate Dr. Ronda Hampton.

Hampton was an integral in developing Villanueva’s strategy and worked closely with him on his 2018 campaign continuing to advise the Sheriff on community relations after he took office in January 2019.

Dr. Hampton released a taped video statement highlighting multiple incidents of racism and bigotry within his own department the Sheriff refused to acknowledge and/or discipline.

“I am disgusted by the hypocrisy of Sheriff Alex Villanueva’s recent statements regarding the Los Angeles City Council member’s need to challenge their bigotry when he has a great deal of soul-searching to do himself.  He has been priding himself on promoting African Americans and Women but when I see the lawsuits against him I have to wonder how is it that a disparate amount of these lawsuits are from African Americans and women, most of which appear to be the very individuals he is bragging about promoting.  He seems to me to have been pro-Latino from early on.
I approached him within his first month of taking office about how he would engage the diverse communities that the sheriff’s department serves, which led to a meeting with his “diversity team”.  I was shocked when all the members of the “diversity team” were Latino and one of the members, Gisel Del Real, displayed such negativity in her tone behavior regarding Black History month that it prompted me to have a meeting with the Sheriff about the lack of diversity on his team and her inappropriate behavior during that meeting. Sheriff Villanueva and his wife, Vivian, defended her behavior and it was clear that he was happy with the makeup of his “diversity team” and that I must have misunderstood Ms. Fernandez.
When I hear and read the headlines regarding Sheriff Villanueva’s negative and erroneous statements about African Americans, his anti-Black feelings are evident. I cringe when I see him attending African American events in an attempt to garner votes.  He appears to share a similar ethos about African Americans as Nury Martinez, Gil Cedillo, Kevin De Leon, and Ron Herrera – he needs to resign.”

In her video, Dr. Hampton refers to deputy Juanita Navarro of the Sheriff’s Information Bureau who posted threatening, racist tweets after the ambush of two Compton deputies. 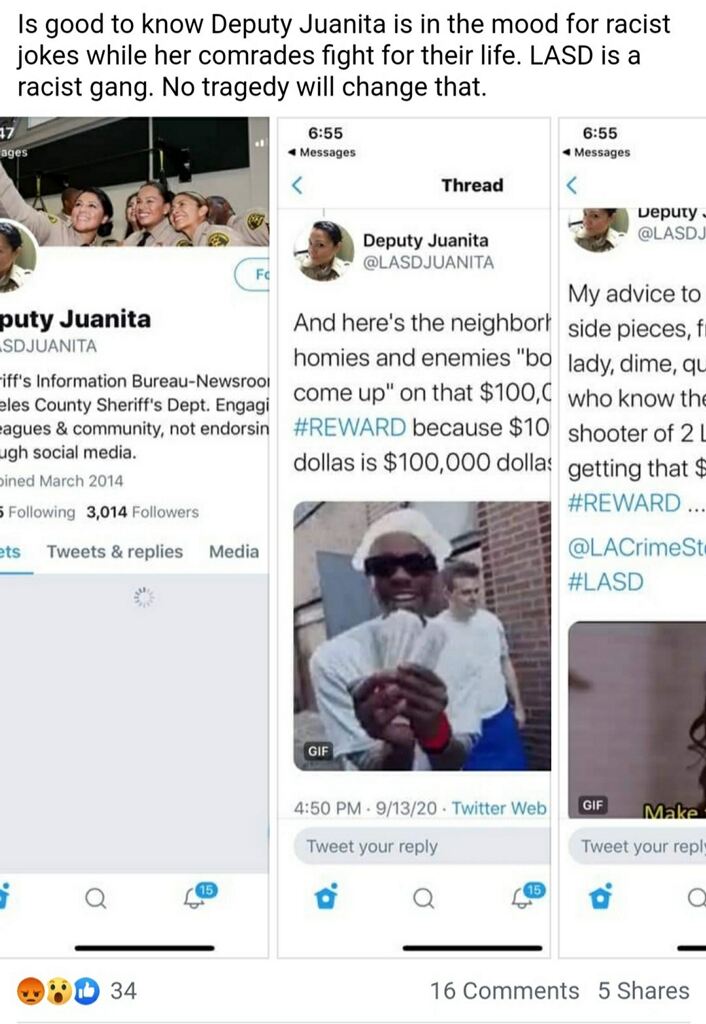 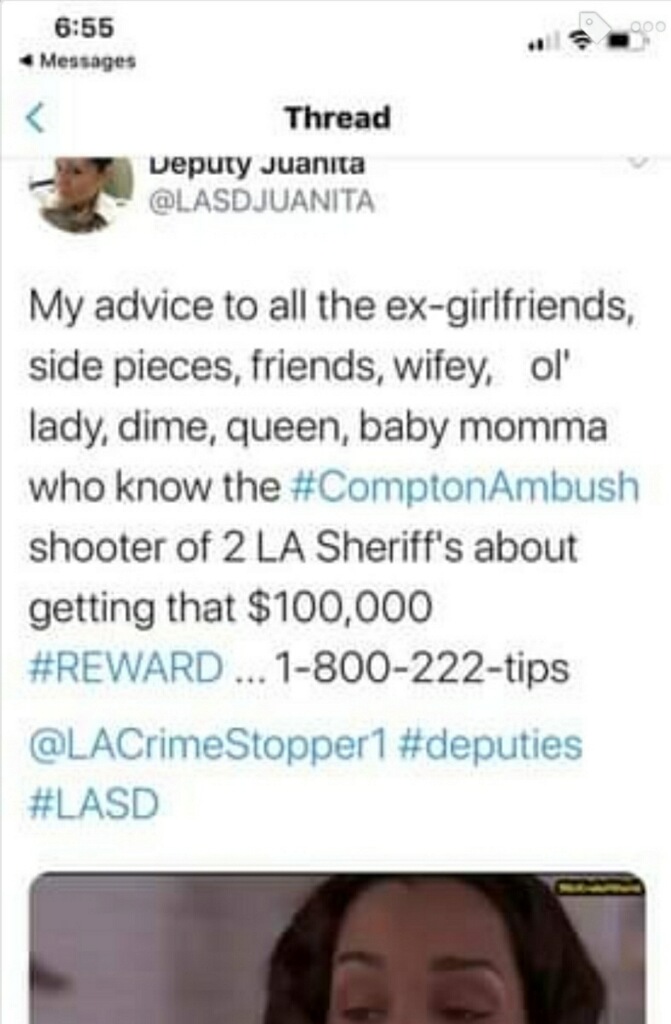 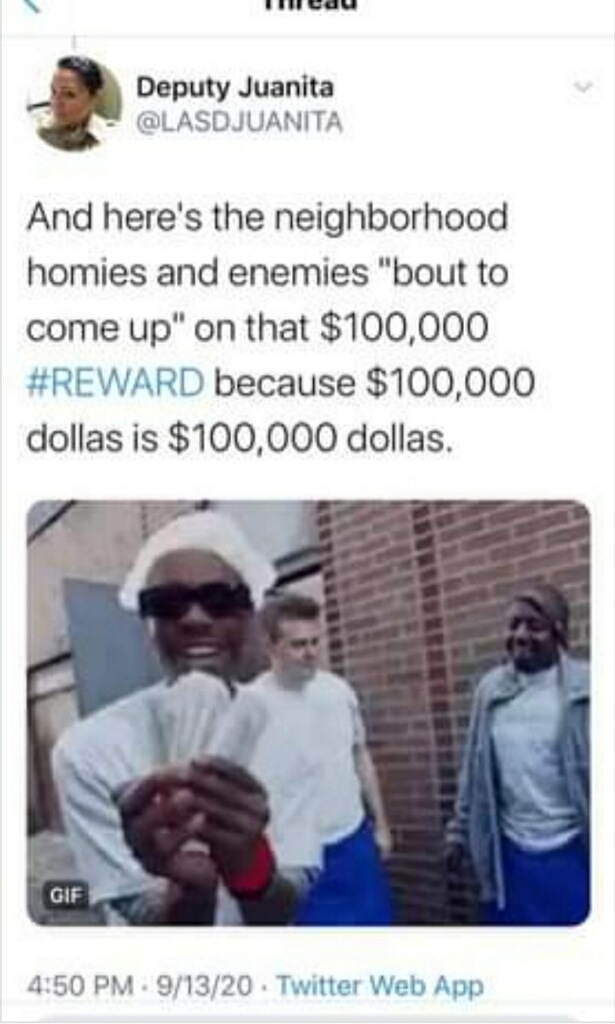 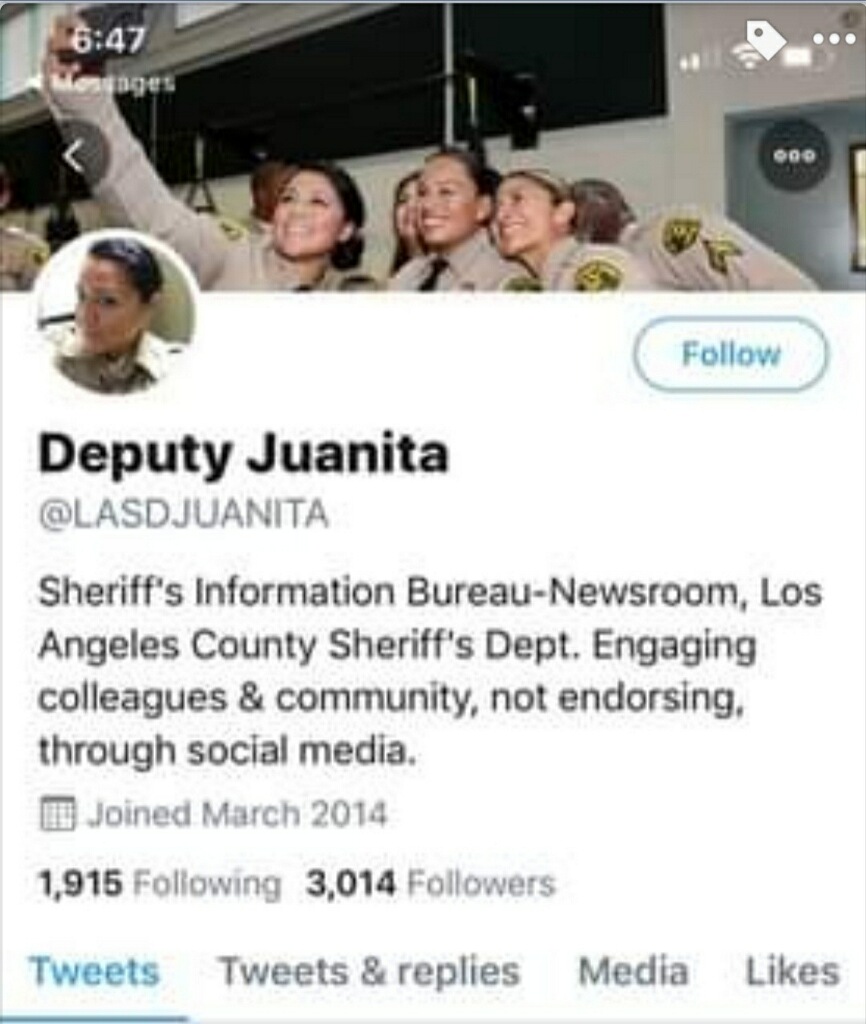 Additionally, Dr. Hampton also referred to the multiple lawsuits UnderSheriff Tim Murakami is embroiled in including one where the second in command referred to Lt. Tracey Stewart as a “kuronbo”, the Japanese equivalent of the “N” word.

According to Spectrum News who released the Stewart story Monday, the County Equity Oversight Panel investigated in 2019. The contents are under seal, pending litigation. It found Murakami used a racial slur and recommended discipline, but it was overturned by Sheriff Alex Villanueva.