And LA District Attorney George Gascon seems to be setting his sites on an Oscar for the high-profile sh*t show he produced, directed and starred in since being sworn in on December 7th.

Barely three weeks into his term, just as awards season was ramping up, he released his pro-criminal directives disguised as “progressive reform” that has contributed to one of the highest spikes in violent crime Los Angeles has seen in decades.

Gascon’s arrogance is evident upon hearing him speak and quickly mutates into aggression (specifically when cameras are rolling) culminating into an on-screen rant similar to a D list actor who should have walked away a long time ago but couldn’t seem to get enough of the spotlight.

Gascon’s anger, presumably a byproduct of his previous highly publicized failures that followed him to Los Angeles, is specifically directed at victims of crimes their families, instead of the criminals who committed the crime. It is heart wrenching to watch continued trauma inflicted upon the survivors of these heinous crimes as they watch in horror the newly elected District Attorney attempt to dismantle our legal system, dashing any hope of justice for their loved ones by arbitrarily making changes to laws as it suits his ego.

In response to Gascons reckless disregard for the law, the Association of Deputy District Attorneys filed suit against DA Gascon on December 30th alleging that Gascon defied state law and forced rank-and-file prosecutors to violate their oaths of office. The presiding judge, James Chalfant granted an injunction on against Gascon for refusing to prosecute Three Strikes Law and special circumstances.

Just days after the ruling, on February 10th in front of the Hall of Justice, Deputy District Attorney Jonathan Hatami and his attorney Brian Claypool, announced Hatami was filing suit against DA Gascon, his “spokesperson” Max Szabo, and the County for; hostile work environment, discrimination, harassment, infliction of emotional distress and statutory employment violations.

Among the statements included in the claim is Szabo’s exceptionally slanderous on-record retort to Fox 11 referring to Hatami’s hostile work environment claims:

“These delusional conspiracy theories raise questions as to one’s fitness to practice law…”.

The theatrics continued yesterday when DA Gascon released a statement “resigning” from the California District Attorneys Association, – however, the resignation was not necessary (for anything other than attention) as Gascon was not a member. How’s that for drama? 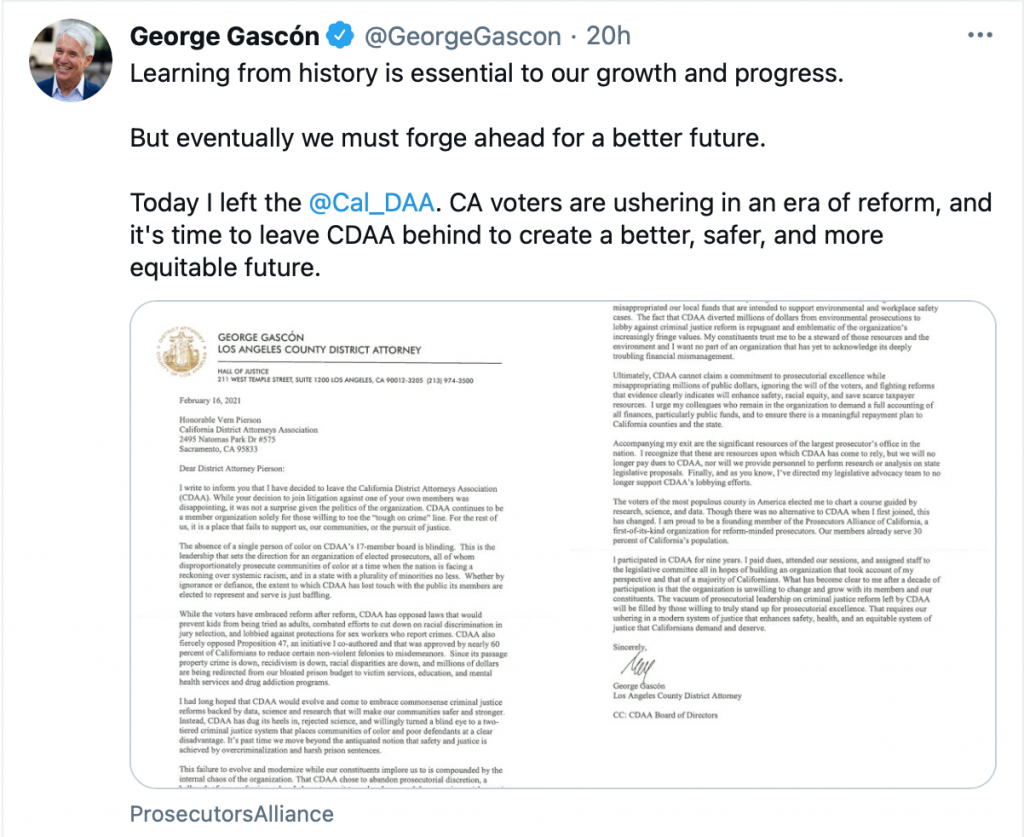 The Current Report spoke with CDAA president Vern Pierson this morning who released this official statement:
“Mr. Gascón cannot resign because he has not been a member of CDAA since October he quit his job as DA of San Francisco. On the ethnicity issue, his remarks are disingenuous, as he ran against the the first sitting Los Angeles District Attorney who was both a woman and an African American. Incidentally, she was a CDAA board officer and in line to become president. Shootings and other violent crimes are skyrocketing in LA. This appears to be a publicity stunt to divert attention from his favoring criminals at the expense of victims and growing calls for his recall.
As for reform, the CDAA, in fact, sponsors many programs, including DA-initiated diversion programs and courts for folks who have mental issues, are homeless or veterans. Our prosecutors are working to protect children who live in violent homes because we know they are more likely to become part of the cycle of violence when they reach adulthood. We are doing a lot of things to prevent crime and to help people who are enmeshed in the criminal justice system find a different avenue forward.”
DDA Hatami also had this to say regarding Gascon’s resignation-letter-disguised-as-a-PR-stunt:
“Regarding George Gascon’s letter to the CDAA, I disagree with it.  There are many good programs sponsored by the CDAA which actually benefit our communities, including diversion programs and courts for military veterans and the homeless as well as programs for individuals with mental health issues.  The CDAA is also working to protect children that live in violent homes, something that is close to my heart since I am very involved in child abuse prosecutions.  George Gascon has been in office for over two months, and he has not made one statement about child abuse or child murders in LA County.  Between 2015 and 2019, there were 111 child deaths in LA County as a result of caregiver abuse.  Most of these deaths were children of color.
In addition, there are more female DA’s in California than males, and numerous females are on the CDAA board.  My wife is a police officer.  It is very challenging being a female in law enforcement. Female DA’s in California and on the CDAA board should be honored and supported.  Something George Gascon clearly fails to mention in his letter.
Shootings, murders, and violent crimes are on the rise in Los Angeles City and County. George Gascon’s ‘data and science’ are failing.  Stop trying to get media attention by claiming you are resigning from an organization that you are not even a member of.  Start being the DA and concentrate on protecting the public and making it a better place for our children to live and grow up.””
Meanwhile a growing group of LA County voters have spearheaded the recall of Gascon based on his criminal justice reform platform he campaigned on, yet did not disclose to voters the planned implementation of “a series of irrational and dangerous policies,” as stated on the recall group’s website. The recall efforts against Gascon can legally commence on March 8th, 2021, 90 days after Gascon was sworn in.”
Featured Photo: Eric Risberg AP
Share this
Tags: