Let there be no mistake about a recall for my ailing Malibu. It would be wrenching, for a city already fractured by a dwindling citizenry displaced by a disastrous fire, persevering disconcerted residents, thankful their homes were spared though many were scarred, and a disconnected second home population.

Though without reluctance I signed the recall petition, as I willingly did the immediate and frankly more pressing petition demanding the resignations or firing of City Manager Reva Feldman and Emergency Service Manager Susan Duenas.

Personally I hope the vote could be avoided, and Rick Mullen and Skylar Peak serve out their remaining terms of less two years; no doubt Rick running up his outrageous overtime to pad his pension as a fire captain, and a smiling Skylar enjoying his very early retirement in his scattered, surfside domiciles. 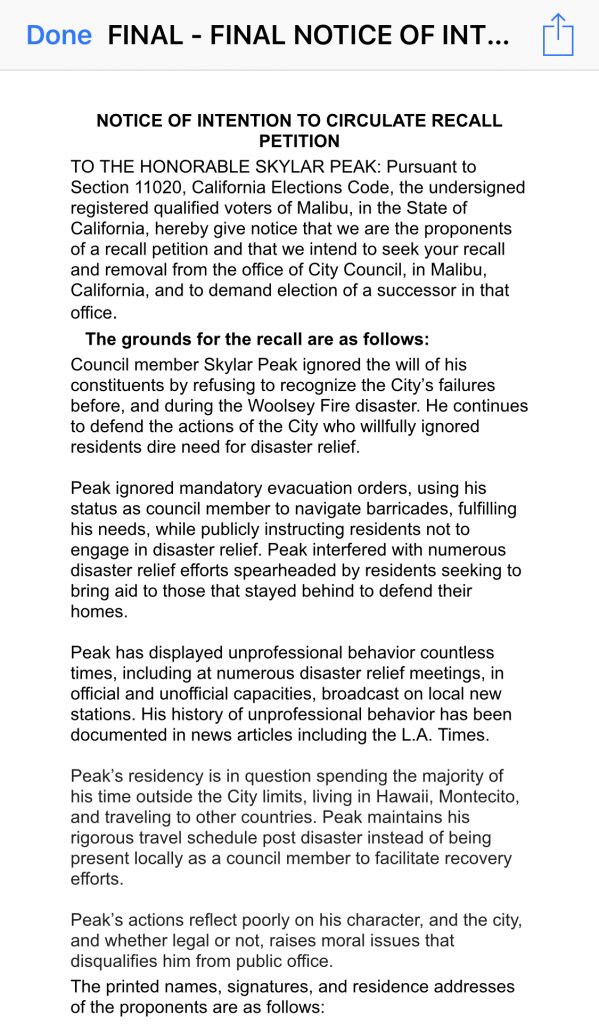 That of course could happen, as has been stated repeatedly by the Malibu strong, determined petition bearers. All it would take to avoid the probable pain of the recall is if the Council would ask for Reva’s resignation. Maybe also throw in an exiting gift, even a letter of recommendation, as a bean counter personified, while showing her the door.  She could always blame her departure to a maladroit Malibu other cities are wont to hear.

Certainly you think it would be preferable to the ignominy of being summarily fired, with a public recitation of her dereliction of duties as well as her vanities. That would make great grist for the popular and professional media, at least from my perspective as someone who has plowed those rocky but fertilized fields.

But then there has to be the reluctance by Reva to give up her $300,000 plus salary and benefits that has made her one of the highest paid city managers in the nation, and not incidentally also for one of the smallest cities. It really is impressive how with limited academic credentials and less senior supervisory experience beyond bean counting, she had wrangled such a coveted managerial position.

But maybe you don’t want to know how, but I suspect it is nothing more nefarious than being employed in a city with a succession of neophyte councils that have preferred to spend money on self-aggrandizing vanities rather than needed administrative oversight.

No one needs the distraction and aggravation of a looming vote, let alone the ugly signage and floods of mail reminding us of how our City Hall embarrassed and failed us in the Woolsey firestorm and after. Then there is the managerial adage of “A people hire A people, while B people hire C people.”  Malibu sadly is adrift in a sea of “Cs.”

Whether they ever admit it and apologize or not, Malibu’s City Hall and a woeful fire department perhaps might be forgiven by the more kindly of us. But for most residents who lived through the fires their failures surely will never be forgotten. 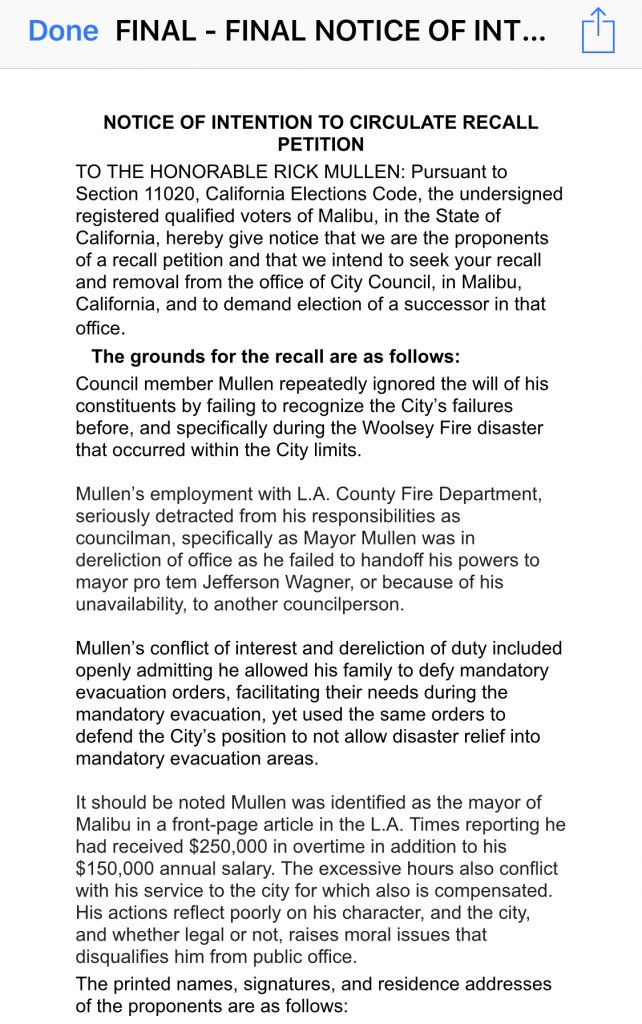 And we don’t need what I’m sure will be b.s. bureaucratic investigations or reviews to tell us they did fail, “yes, but.”  To be sure, a very pronounced “but.” Though the reports might make for coveted souvenirs, and for a few I’m sure will be cathartic.

But expect no one responsible to be cited, no civil servant or serpent named and resignation requested. Perhaps a “lessons learned” would be helpful, with specific mandates and budget allocations. Maybe the budget funds the fire department personnel, such as our former mayor Mullen, have been scamming, albeit legally, can be diverted.

Also personally we really don’t need more of our evening or weekends usurped for open meetings with the usual suspects looking nonplussed at the head table, mouthing excuses and their sycophants nodding like bobble head dolls, scowling at those candidly venting.

Yes, all this can be avoided and we can get on with and the arduous task of rebuilding Malibu and aiding however we can the burnt out victims of the fire.

Reva of course can do the right thing, and resign, for which she would be thanked.  No more booing, please.

But if not, the Council could fire her, by a 3 to 2 vote, by councilpersons I hope would not need to be reminded that they were elected to office, not anointed with divine rights, and have constituencies that want Reva gone, the sooner the better. The petition should be read to all who would listen.

It’s time for that moment of truth, difficult as it is. Time for each councilperson to be held accountable, yes, Rick and Skylar, too, as well Jefferson, Mikke and Karen: a divisive, diverting recall, or a simple, if sad, request for a resignation?