The paddle boarder, from Pacific Palisades, ignored L.A. County Lifeguards demands to exit the ocean and remained in the water for approximately 30-40 minutes. An LASD boat was brought in from Marina Del Rey Station to assist, and once the Sheriff’s boat arrived on scene, the suspect then complied and swam to shore. The suspect was arrested for Disobeying a Lifeguard 17.12.115 LACC and Violation of Government Code 8665. He was booked at the Lost Hills station and subsequently released with a promise to appear in court. According to our sources, the suspect told officers his actions would now earn him”street cred” and was allegedly unfazed by his actions that carry stiff legal penalties resulting from the Stay at Home order on March 19th by Governor Newsome in response to the rapidly growing Covid-19 virus.

“To protect public health, I as state public health officer and director of the California Department of Public Health, order all individuals living in the state of California to stay home or at their place of residence except as needed to maintain continuity of operations of the federal critical infrastructure sectors,” stated Newsom in his order.

The order is enforceable by law, and the Office of Emergency Services has been given the authority to take necessary steps to ensure its compliance. This order utilizes California Government Code section 8665, which mandates that any person who violates or willfully neglects to obey the shelter in place order can be found guilty of a misdemeanor. Failure to adhere is punishable by a fine up to $1,000, a maximum sentence of six months jail time, or both.

Aside from the legal consequences, there is a growing health concern among scientists including Kim Prather, a leading atmospheric chemist at the Scripps Institution of Oceanography who was interviewed by the L.A. Times.

“I wouldn’t go in the water if you paid me $1 million right now,” she said.

In her research, Prather has found that the ocean churns up all kinds of particulate and microscopic pathogens, and every time the ocean sneezes with a big wave or two, it sprays these particles into the air. She believes that this new coronavirus is light enough to float through the air much farther than we think. The six-feet physical distancing rule, she said, doesn’t apply at the beach, where coastal winds can get quite strong and send viral particles soaring.

Many beachgoers know they can suffer skin rashes, stomach illness and serious ear and respiratory infections if they go into the water within three days of a heavy rain, because of bacteria and pathogens washing off roads and into the ocean. Raw or poorly treated sewage entering the ocean also poses major health risks.

During the Malibu Lagoon Restoration Project biologists and scientists weighed in on the faulty septic systems in the Colony that contributed to contributing to a toxic surf break at First Point.

The excavation during the project discovered some of the adjacent Colony houses to the lagoon had covert illegal discharge pipes that led into the back of the lagoon. Several eye witnesses claim that at least one particular home owner would sump pump untreated human waste of his submerged flooded septic through his illegal discharge pipe directly into the lagoon. The EPA deemed that area of the lagoon a “Dysfunctional Death Zone” and surfers referred to it as the “Polio Pond.”

Surfrider Foundation staff scientist Katie Day weighed in on Covid-19 and the potential for high concentrations of the viable COVID-19 virus could put freshwater recreation users at risk.

Regardless of known health risks regarding close contact during the Covid-19 health crisis, State Parks and Ventura County have been less than motivated to enforce state mandates based on the crowds that continue to congregate at Ventura County Line, and Neptune’s Net, a tourist destination who has been overwhelmed trying to implement social distancing according to public health guidelines. The first weekend of the Stay at Home Order, owner Margaret Cho told The Local Malibu they “didn’t expect anyone because of the Stay at Home order and was completely unprepared for the crowds”. They have since constructed barriers to limit crowds from gathering. 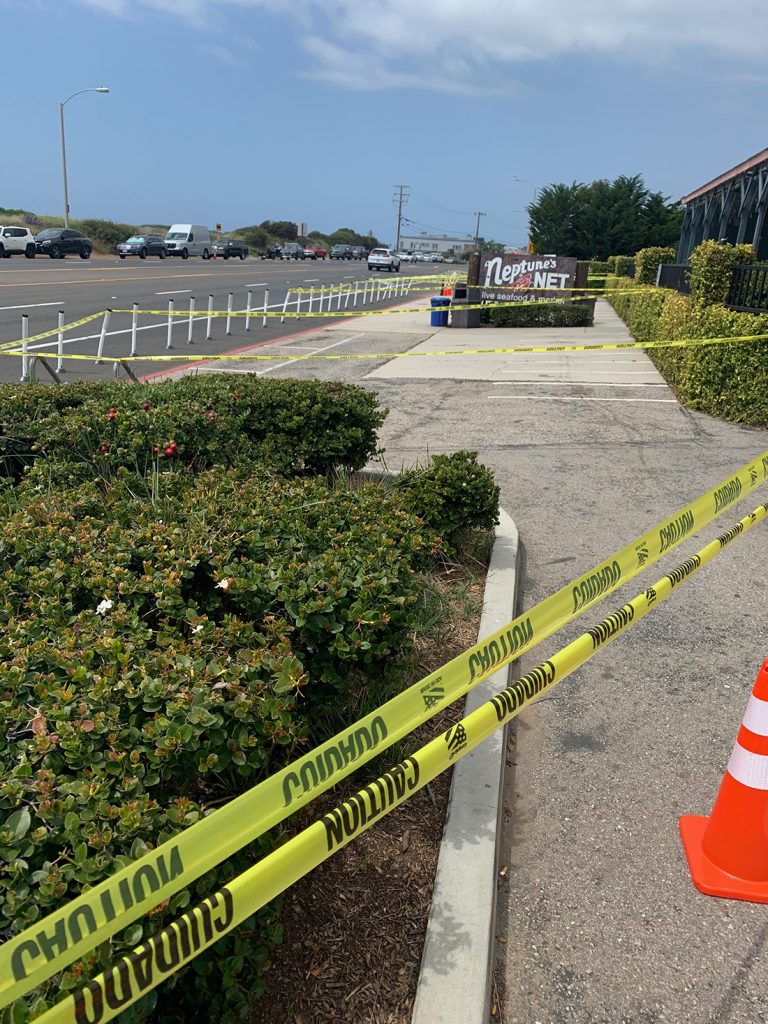 Repeated efforts have been made by community members putting pressure on lawmakers to enforce the government codes at County Line are expected to result in closing off  of access to the County Line surf spot any day now requiring law enforcement to fine or arrest violators going forward.