Our resident pitbull with building and planning (even more so after the Woolsey Fire!), Architect Lester Tobias, goes deep on the subject of debris. 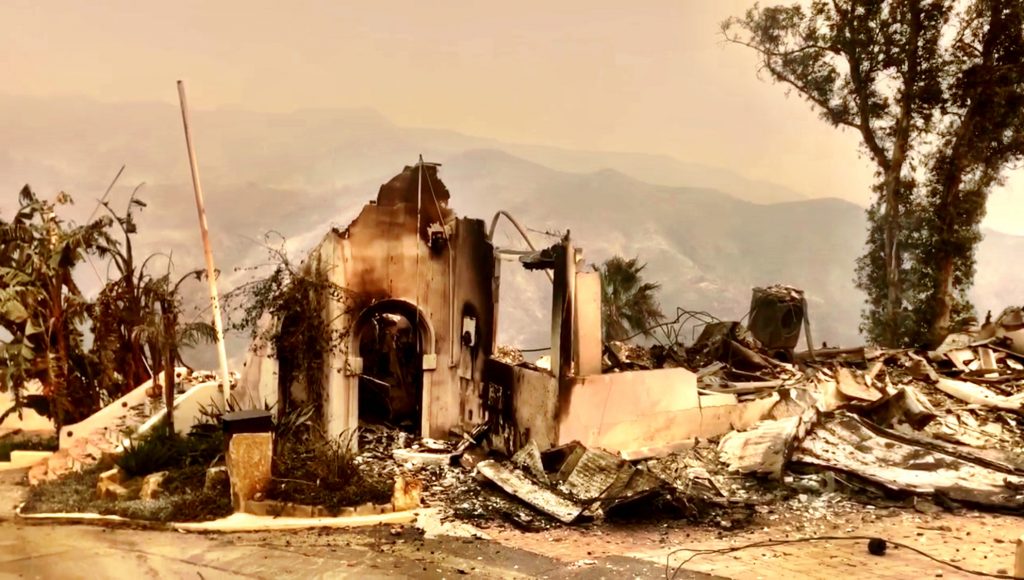 I have been so deep in the debris on this debris removal thing that it’s pathetic.  But it’s justified.

I do not trust the government as far as I can throw them.  The whole notion that Cal OES will take care of everything and either not charge the homeowner a dime seemed, at first blush, a nice offer.  We kept being told how successful the program has been in the past, how there have historically been 90% participation rates, etc.  Then the people of Malibu read the “opt-in” document and forms, and started asking questions.

So I have been reading and calling and getting quotes on all sorts of scenarios.  I have filled out the entire “Opt-out” form and generated all the plans and photo documentation.  I have also filled out the “Opt-in” forms so that I may submit them immediately if the situation ultimately warrants this action.  I have met with the County representatives at both Malibu and Calabasas.  And I still haven’t decided what to do.  I don’t have the answers, but I think I have all the right questions.

Which is why fortune smiled on me this morning and put me at the building department just as Tim Smith, the Cal OES guy in charge of the whole deal, showed up to answer questions.

So I had questions and he definitely had answers.  Here is the gist of our conversation:

Q: How is this thing structured?

A: Cal OES is in charge of the whole thing.  They are hiring two “Prime” Contractors who will be subcontracting all of the work to licensed demo and hauling outfits.  Each Prime Contractor will start out with three to five subcontractors and will ramp up to 20 each, for an estimated total of 40 demo crews working in Malibu at the apex of the effort.

Q: What about the “Sweetheart Deal” aspect of this no bid work?

A: Cal OES is assuring homeowners that each property will be monitored for actual costs (I had heard that each property would be bid, but he did not say that, nor does the structure of the process seem to involve individual bids), hauling loads will be recorded, crew size and days per project will be monitored and ultimately managed by the Cal OES people.  It is important to remember that, ultimately the only people on the hook for the cost of this work are the American Taxpayers, so I do think that there will be that perfunctory governmental assurance that they realize that the taxpayers deserve an efficient and effective process, so, you know, there’s that….

Q: What parts of the site are being cleared by this program?

A: The testing and debris removal are limited to structures. They are NOT clearing your site,  vegetation, removing vehicles, site retaining walls, etc.  They are not removing swimming pools.

They will not remove a structure’s retaining walls if it looks like their removal will cause slopes to fail.

Q: How much work can be done on those excluded items before the Cal OES contractors come in?

A: As long as the areas of the structures are undisturbed, there is nothing that is specifically excluding the removal of those items that Cal OES is not having removed.  HOWEVER, if the crews determine that the areas under their purview have been disturbed, they might not perform their services, so it’s a little dicey if you want to get in ahead of the process.

Q: How will the parcel debris removal be prioritized?

A: At this time it is undetermined.  Historically, schools and other public sites go first, then parcels that pose the most hazard to neighbors (like, if you are the only house on your street that burned down, I think…). However they may just set up a start and finish line and run an orderly sweep from one end of the west side to the other.  It is all up to the number and location of the “opt-ins” and how fast they can ramp up operations.  Basically, nobody knows.

Q: How long will it take?

I’m sure you will all have more questions.  Tim can be emailed at tim.smith.caloes.ca.gov.

Enjoy the Holidays.  We have some heavy lifting to do come the first of the year!