With a single wind shift, not one, but two potential wildfire threats to our area produced monumental concerns for residents just 11 months after the Woolsey Fire devastated our community. Last year’s fire destroyed approximately 1643 homes and 97000 acres burned overall between November 8-10th, 2018.

Shortly after 7 pm. on Thursday, October 10th, the Wendy Fire, named for its ignition point on Wendy Dr. in Newbury Park, was reported on social media.

The fire started at 7:11 p.m. near the Wendy trailhead at Wendy Drive and Potrero Road in Newbury Park. The fire burned in a southerly direction, away from homes on national parkland, with firefighters initiating a strong attack on flames. The same area was  previously hit hard by the Woolsey Fire last November. 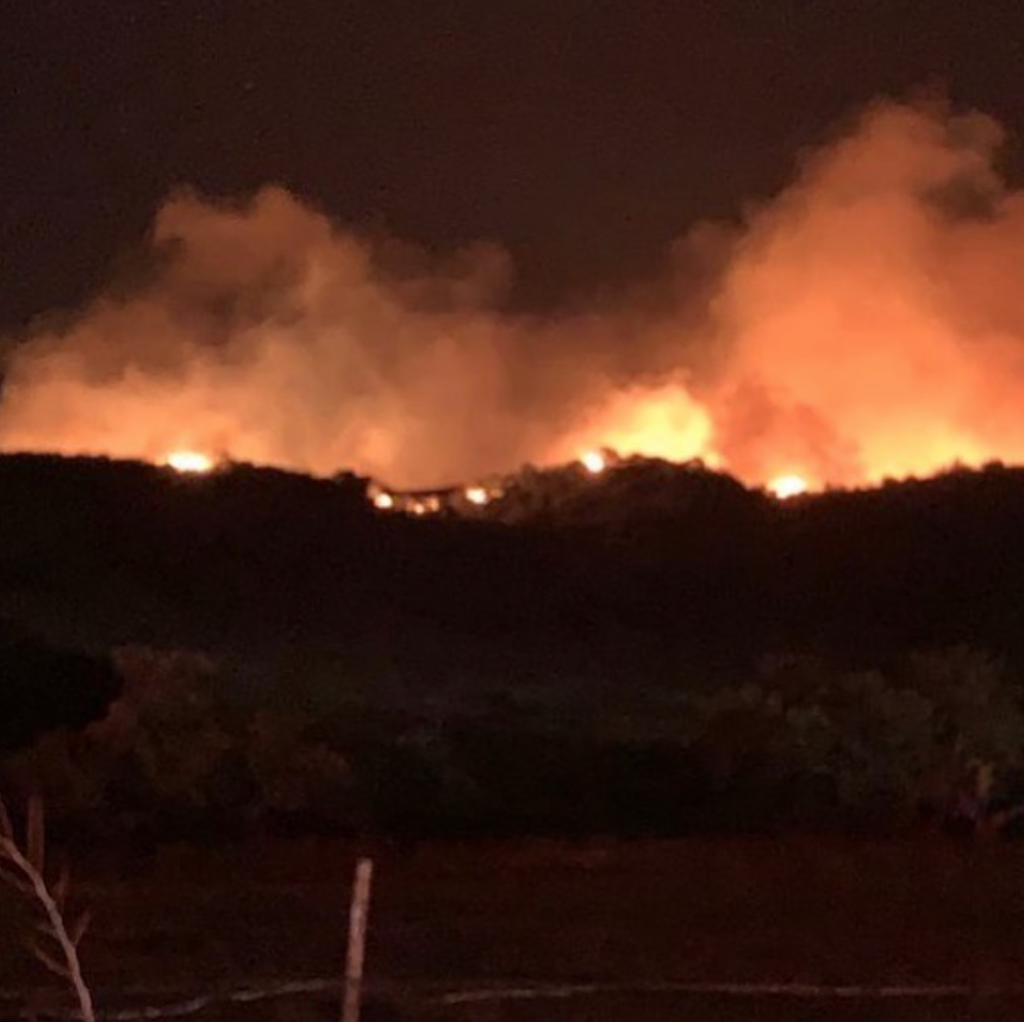 Unbeknownst to locals, the efforts to stop the blaze were successful upon its approach to Point Mugu State Park. However, with flames visible in the distance by Decker Canyon residents before 10 p.m., and no guidance from authorities, or the City of Malibu as to wind direction and preparation for residents, those living in the canyon with large animals were not taking any chances and making plans to voluntary evacuate on their own.

The Wendy Fire was getting dangerously close to Malibu for residents still raw from Woolsey.

Anxiety reached a fever pitch with residents posting on social media their concerns over the flames visible from the Wendy Fire, and smoke filling the canyons from different directions. The City of Malibu sent out only one alert at 8:23 p.m., and no further updates as flames became more visible from canyons looking down the coastline.

The Saddleridge Fire was now raging out of control and fears of yet another fire headed toward Malibu, with similar patterns of the Woolsey Fire, spread through the community fast.

After a sleepless night with no real updates on the Wendy Fire other than official response on social media that lacked detail, discrepancies over Wendy’s containment sent the community spinning once again. Reports varied between 25% and 90% with local authorities sending out an incorrect emergency notification at 90% when the fire was in fact only contained to 25%. Reports of winds gathering strength once again made residents extremely uneasy. 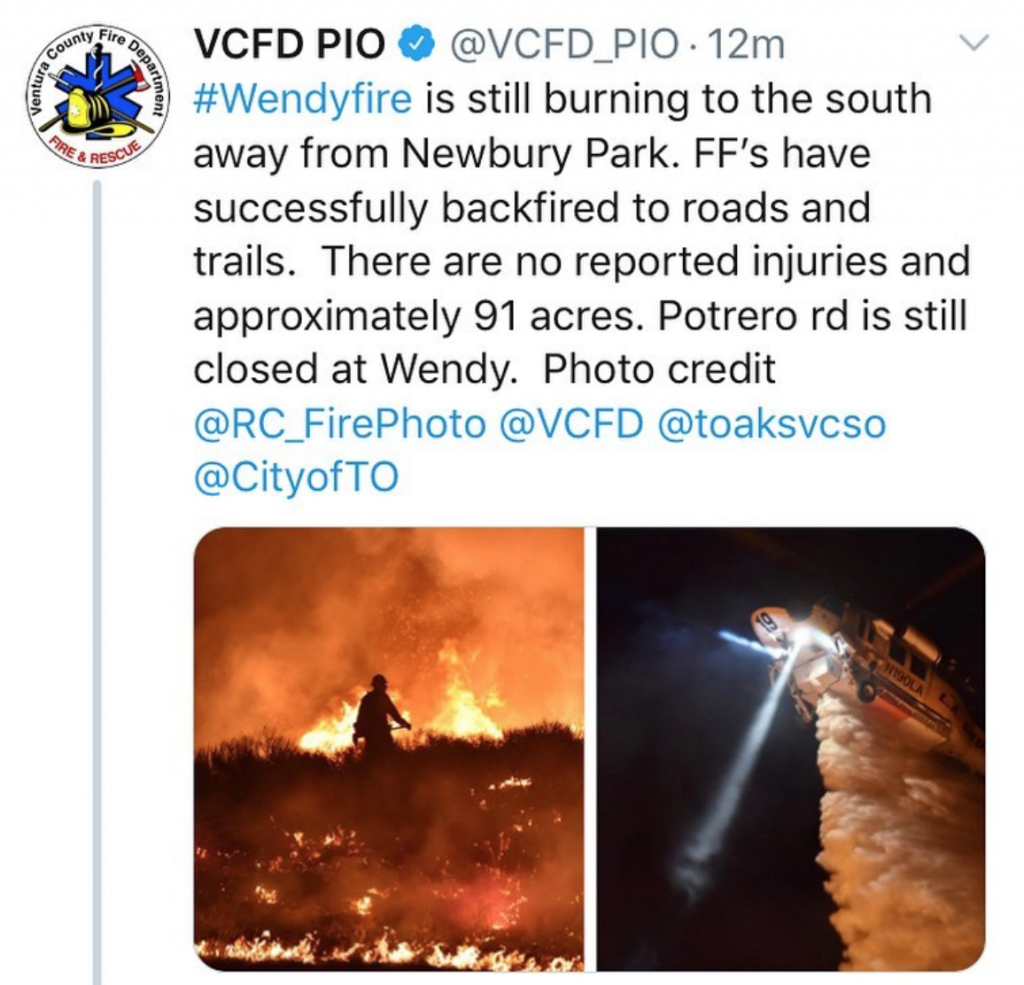 The City managed to eek out one tweet mentioning the Wendy Fire, and completely ignored the Saddleridge Fire growing in size exponentially overnight.

By Friday, more than 1,000 firefighters from multiple agencies were battling the Saddleridge Fire. Eight helicopters made repeated water drops as crews on the ground attack the flames, and two super scoopers and one Erickson air crane join the fight from the air as the fire headed west toward the Ventura County. A slight wind shift could have impacted Malibu similarly to what we experienced 11 months ago

Too Lazy To Use Fire Liaison?

In May, the city added a third person to the Malibu Public Safety Department. The new Fire Safety Liasion position was created and filled with Jerry Vandermuelen, a 35 year veteran of fire service experience with the Kern County and Ventura County Fire Departments.

The Wendy Fire event would have been the perfect opportunity for the City of Malibu to flex this new fire expert’s muscle. Alas, that would not come to pass. It is unknown why the city did not utilize the newly hired Fire Liaison’s knowledge and connections in Ventura, the lead agency in the Wendy Fire, to gather information and properly guide residents during the first fire event breaking out so close to Malibu.

The combined experience and relationships with Ventura officials that Malibu City Public Safety Director Susan Duenas supposedly brought to the table before the Thomas Fire (but did not benefit locals whatsoever in terms of communication and preparedness), and the added experience of the new Fire Liasion, it would seem the City would be prepared, and communication would be detailed and at the highest level.

Unfortunately it was deja-vu-in-the-bu, as yet again, City of Malibu officials were embarrassingly unprepared, even after a report ordered by Council last February was submitted with over 50  recommendations regarding Malibu City staff’s failures during the Woolsey Fire that needed to be addressed before the next disaster (Paul Taublieb’s assessment of the whitewashed report on the City’s response to Woolsey).

Our first taste of fire season was a bitter re-opening raw wounds from Woolsey much too soon.

You’re On Your Own.