“I believe an organization is as a reflection of its leader.” Vera told reporters. ” The community looks to law enforcement to be the voice of reason during its worst of times. Unfortunately, at the present time, the Los Angeles County Sheriff’s Department has developed a reputation for contributing to contention during trying times,” Vera said in a statement to NBC.

An interesting observation for a candidate who is involved in multiple civil litigation suits including political retaliation and other bad behavior.

Equally troubling Vera would enter a highly-charged political race knowing the voting public (at least the ones doing their homework), are just one click away from a database of dark secrets. A pretty risky move.

Did anyone talk this through with him before he filed his candidacy papers? 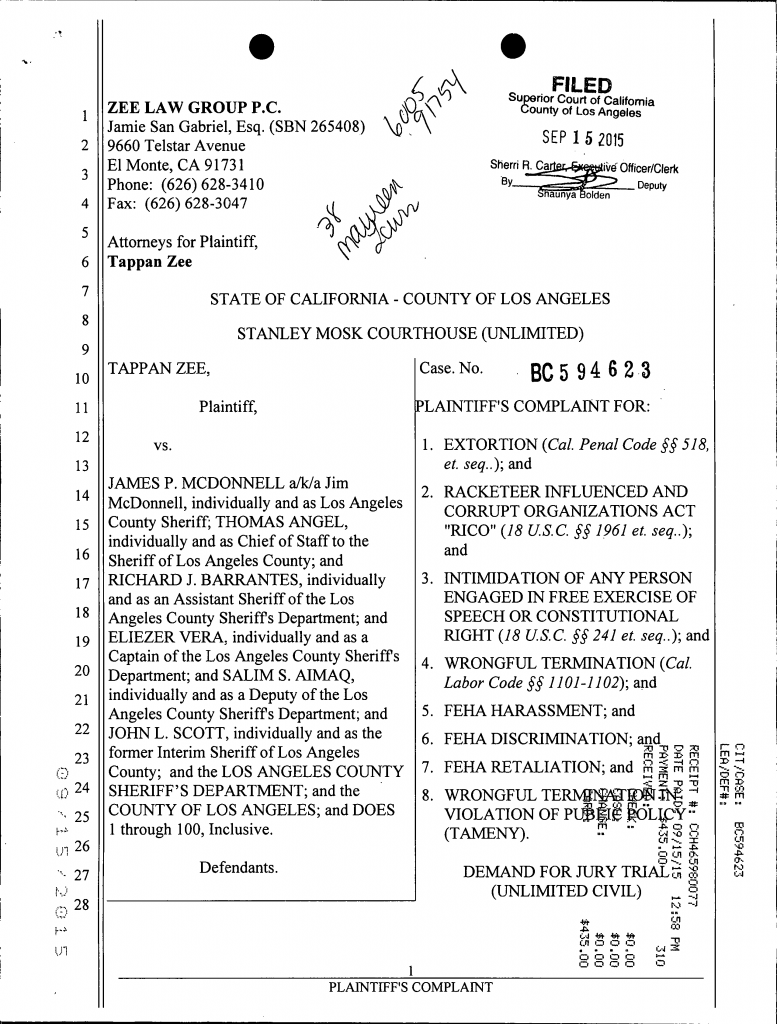 Lawsuit #1, a State lawsuit, was filed September 15th, 2015, naming  candidate Vera as  both as an individual and a member of LASD, along with co-conspirator, former Sheriff Jim McDonnell – who we hear might be throwing his hat in the ring again too.

Simultaneously, Vera filed as the plaintiff in the second suit (that we have found so far), against the county for political retaliation.

In the 2014 race for Sheriff, Vera was a vocal supporter of candidate Jim Helmond, the same race his co-conspirator in civil case #1, Jim McDonnell ran for (and won).

Apparently, Vera’s support for Helmond didn’t go over well with the guys at the office prompting him to file his suit October 10th, 2017 and believe it or not, is scheduled to go court Monday, May 3rd, 2021.

How’s that for timing? 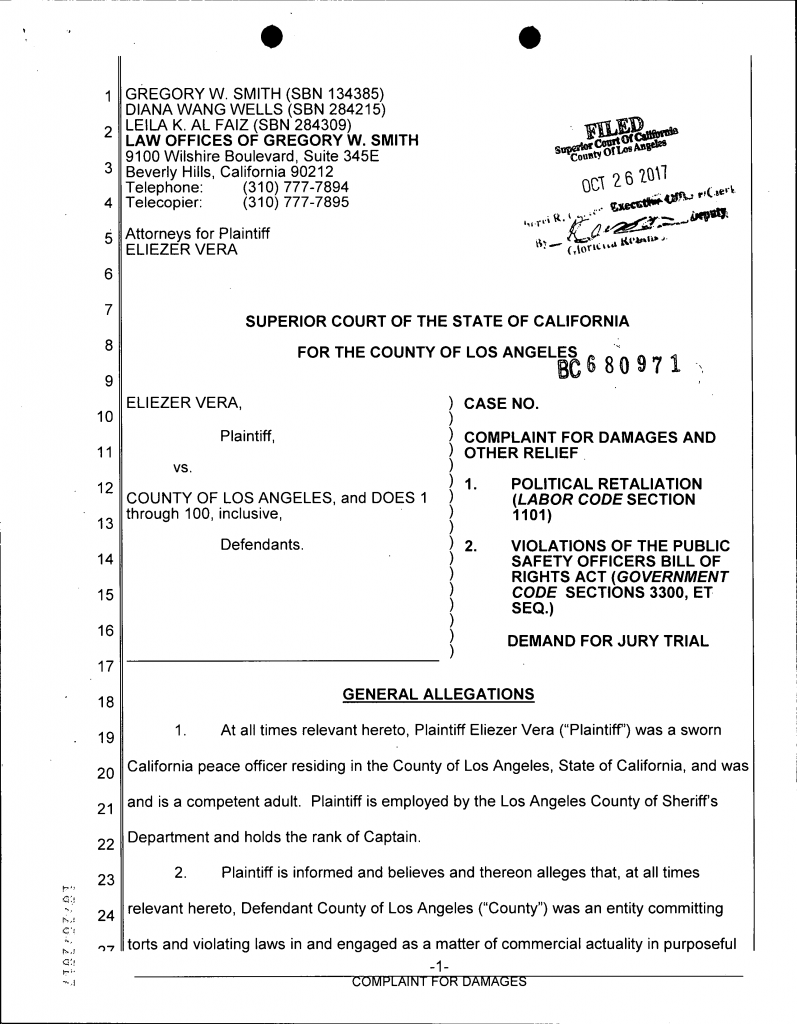 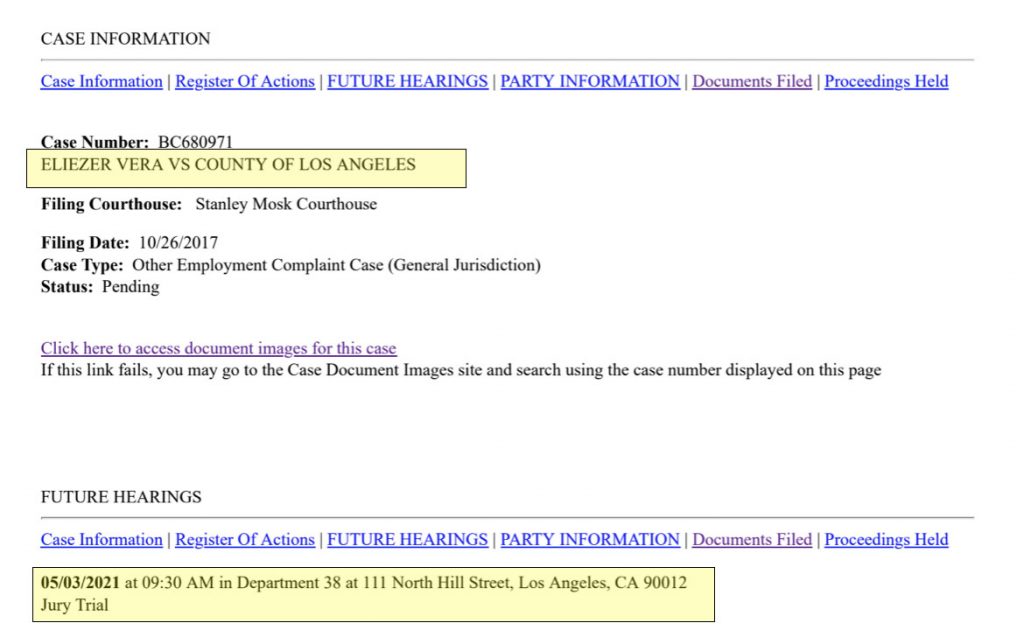 In layman’s terms, Vera is the first candidate to announce he is running for Sheriff in 2022, with at least one active political retaliation case currently being litigated in court and one under his belt as a defendant with some pretty impressive allegations.

So, when Candidate Vera told the press “I believe an organization is as a reflection of its leader.”,  is potential Political Extortion, RICO Violations, Intimidation and Wrongful Termination part of the package?

It wouldn’t be surprising since Vera is already notorious for clearing a previously disciplined officer and igniting the fuse that has caused the explosion of tension between Sheriff Villanueva and the Board of Supervisors. Not to mention, within minutes of announcing his candidacy, Vera attempted to manipulate voters by completely disassociating himself with the final decision made by the Truth and Reconciliation Panel and contradicted sworn statement on behalf of Sheriff Villanueva.

In a nutshell, the very first words out of Vera’s mouth, as a candidate running for Sheriff of L.A. County, were deceptive and untrue.

How much more discipline can you get being stripped of your badge, service pistol and your job?

Yet, in his sworn testimony, he said quite the opposite.

Court documents show that in a memo to Sheriff Villanueva, Vera and Undersheriff Murakami jointly concluded, the employee should not have been terminated.

“On December 21, 2018, the panel members met and discussed the allegations contained in the Department’s Letter of Imposition. The committee members reached a consensus that the Imposed discipline had been excessive for Mr. Mondoyan’s actions…..” 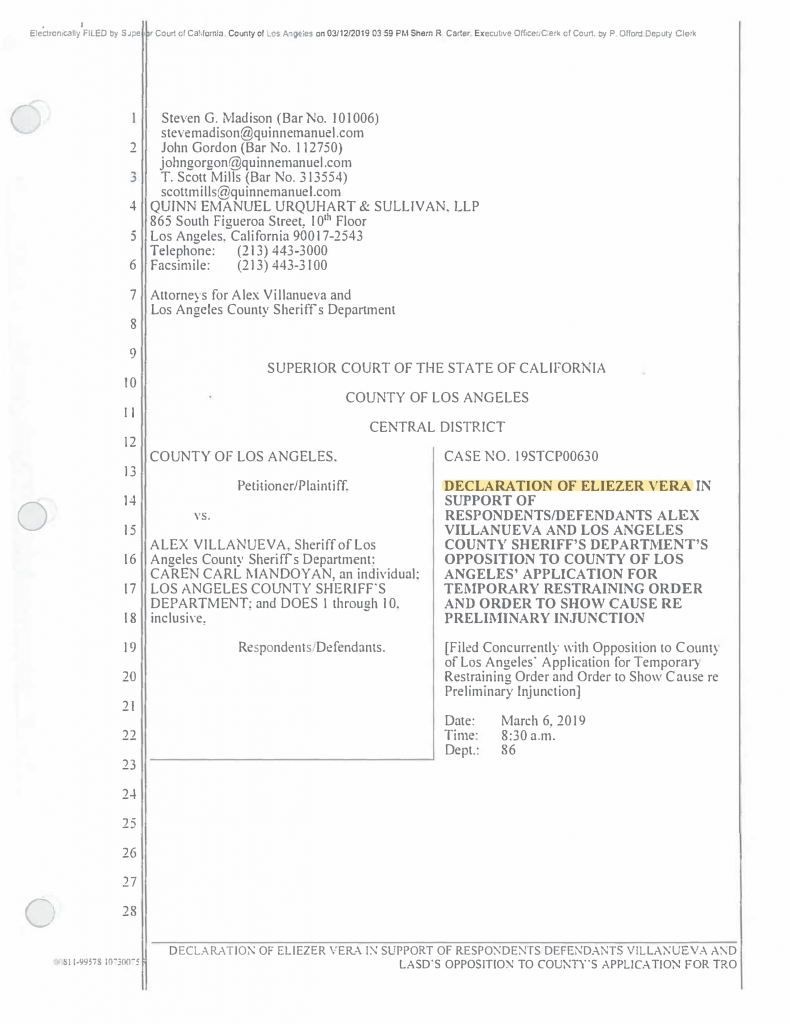 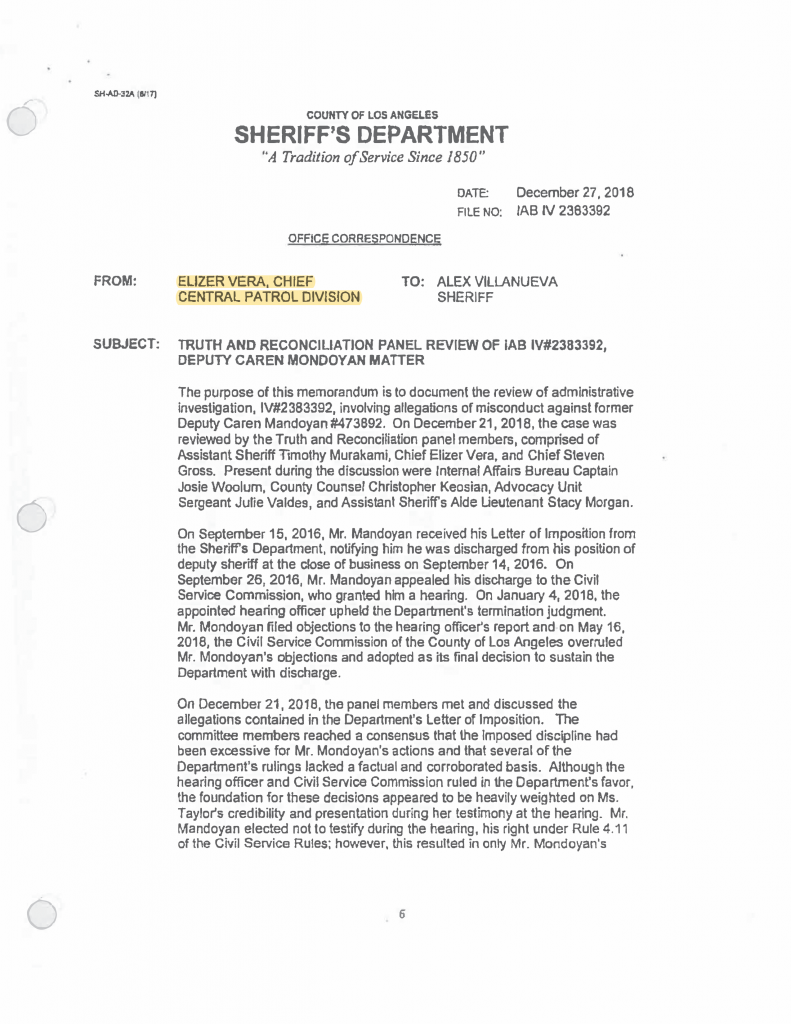 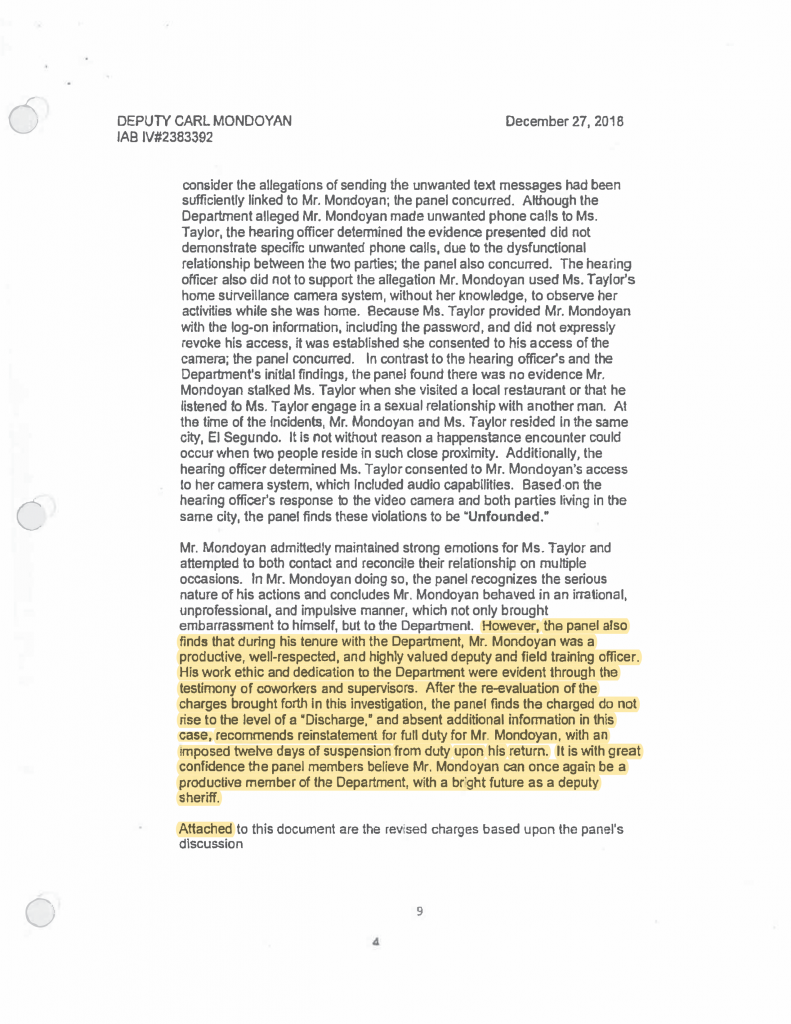 Did he think we wouldn’t notice?

Mandoyan’s case has become a serious bone of contention for Sheriff Villanueva since The Times revealed that Villanueva reinstated the deputy shortly after taking office.

The move set off an unprecedented legal battle between the Sheriff and the L.A. County Board of Supervisors, escalating to a court battle  to stop Villanueva from reinstating Mandoyan.

After Sheriff Villanueva recused himself  to avoid any appearance of conflict-of-interest, Vera and Murakami lead the Truth and Reconciliation Panel, in which, they overlooked threats of retaliation by Deputy Gangs and reversed the termination of the deputy.

Candidate Vera has risen through the ranks of the LASD, serving at the Men’s Central Jail, the Lynwood, Lennox, Compton, Century and South Los Angeles stations, the Detective Division’s Cargo Theft Criminal Apprehension Team, as an executive aide in the Office of the Sheriff, in the Reserve Forces Bureau and the Communications and Fleet Management Bureau. Basically, every station that has a history of Deputy Cliques the Sheriff Villanueva has been trying to clean up.

Murakami, separately up to his ears in litigation has earned the moniker “$8 million-dollar man” due to an $8.1 million judgement against the county for – you guessed it – retaliation.

As a result of Murakami’s poor decision and support of deputy cliques, the Civilian Oversight Commission, OIG Max Huntsman and Holly Mitchell have continued to attack Sheriff V like rabid dogs devouring a fresh piece of meat.

Vera told NBC that if elected, he would make it his mission to “restore confidence in the office of the sheriff by partnering with the Board of Supervisors, collaborating with oversight, creating clear channels of communication with all whom we serve, and setting aside differences for the fulfillment of one common purpose — serving the residents of Los Angeles County.”

It will be interesting to see if Vera takes the Sachi Hamai approach and trades political endorsements in lieu of dismissing his case against the county.

Vera’s announcement came as a surprise to many, not because of the lawsuits, but more so because of Vera’s rumored close relationship with Undersheriff Murakami. Which, as you can imagine, poses a serious conflict of interest for the Undersheriff.

The friendship between Murakami and Vera is not just close sources say, it’s really close.

You know, the go-to-the-same-church, go-to-each-others-house-for-dinner, family-counseling, cover-up-misconduct, kind of close. Which can be expected when you work closely together over the last two plus decades…but not expected when you decide to oppose your BFF’s boss in one of the most important political races in L.A. County.

For those of you in need of a back story, once Villanueva took office in January, 2019, Murakami  jumped initially three ranks, then a total of four to the #2 spot at LASD.

In baseball terms that’s similar to plucking a pitcher from Single A (first level of minor league baseball) and promoting him in the starting line-up in the World Series. Risky business, to say the least.

I’m still at a loss as to who supported – and convinced – Sheriff Villanueva the four-level promotion was a good move for the department as Villanueva, who has a PHD in Public Administration, absolutely knows better. The move even goes against the basic principles of business 101 – I don’t care how good of friends you are.

Speaking of friendship – and surprise moves – Vera’s candidacy literally came out of left field. Over the past year there have been many names thrown around regarding potential candidates running against Villanueva. I can assure you, based on my intel both inside and outside of the department, Vera was not one of them.

Given the rumors of the close nature of the relationship between candidate Vera and Undersheriff Murakami, you have to believe Murakami had pervious knowledge before Vera’s final decision – and his announcement – to run for Sheriff.

So, did Murakami in good faith have a pow wow with Sheriff V about his Vera’s decision to run for the top spot at LASD?

You know, a respectful heads-up to his boss/colleague/friend that his longtime friend/co-worker was going to run against him for Sheriff? Or were there crickets around the water cooler? 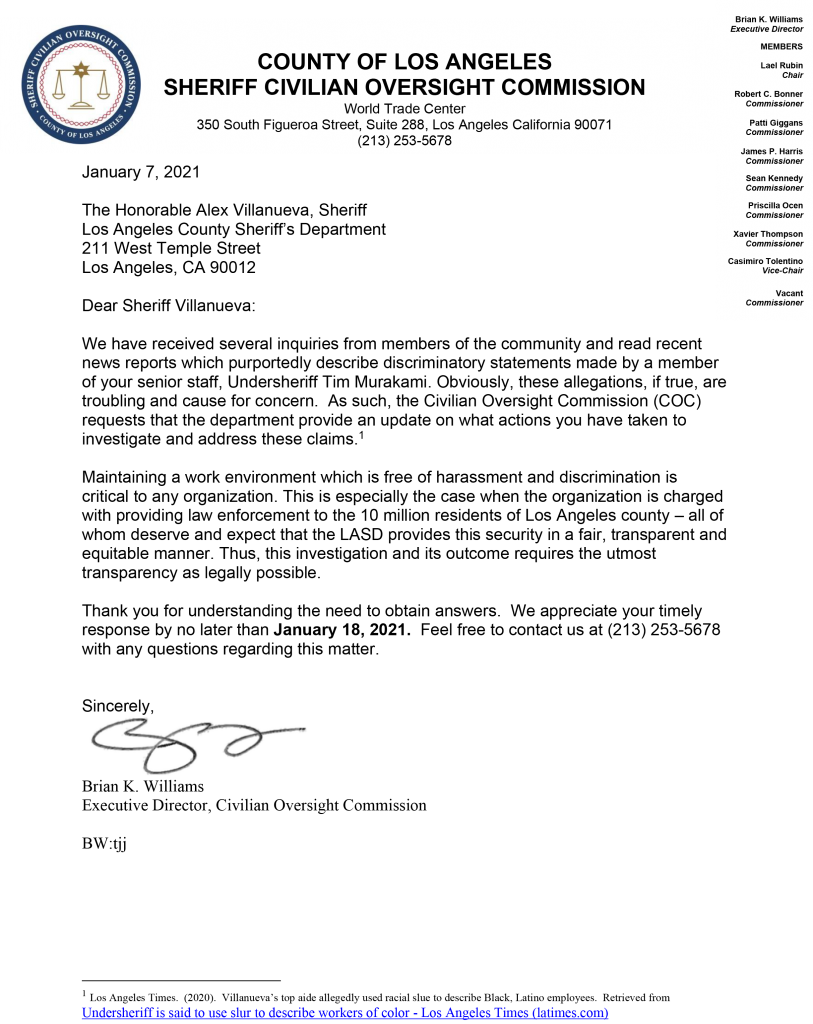 In light of Vera’s announcement, and the Undersheriff’s personal relationship with the candidate running for Sheriff, will Murakami recuse himself  – like, perhaps take early retirement?

Or will Sheriff V let him stick around playing both sides of the fence?

As it is, Murakami has created massive financial liability for an already cash-strapped department as the rank and file continue to file workplace harassment suits related to his inability to follow Sheriff V’s directives.

The Murakami/Vera combo could be deadly to the department potentially inflicting more damage and chaos for rank and file deputies before the 2022 primary,

In the end, the real question is, who will Murakami actually take the bullet for?

Only time will tell.

The last two and a half years have been a road paved with potholes for Sheriff Villanueva, however, 2021 is turning out to be a smoother ride for (so far).

Sheriff V’s “Victims Matter” campaign was a political game-changer for the embattled Sheriff as Villanueva flexed some serious public safety muscle after newly sworn in DA George Gascon attempted to strip every legal right afforded to victims and their families, while single handedly dismantling the justice system.

Villanueva is the first – and so far, the only leader in law enforcement – to stand up for publicly for victims.

Villanueva’s historical actions standing up to the political powers that be – including District Attorney Gascon – in the spirit of the law and in the name of justice, is quite simply, unprecedented.

No other candidate in the 2022 race for Sheriff can lay claim to Villanueva’s strength and determination navigating through two states of emergency (the pandemic and civil uprising), massive defunding, skyrocketing violent crime all the while taking a political pounding from the Board of Supervisors – not to mention make it out in one piece with a new and improved public persona – in spite of the political chaos Angelenos are currently witnessing.

Since “reflection” seems to be the theme of  Vera’s campaign, maybe it’s time for him to look in the mirror.

*Additional research for this article by Jack London