After an exhaustive five plus day search, the LASD Tactical Rescue team announced the recovery of  the body of a female closely matching the description of Jennifer Lorber, who went missing in the area Thursday, May 23rd.

A confirmed resident of Colorado, with family in Southern California, Lorber arrived in time for the Memorial Day Weekend to spend time with friends and family.

Lorber checked into the M Motel at 22541 Pacific Coast Hwy, and arrived with no reservation, as confirmed by sources close to the family.

A college friend met Lorber at her hotel at approximately 2:30. They spent a few hours together with the friend leaving at around 5:00 p.m.

Later that night, Paradise Cove video cameras place Lorber in parking lot of the cafe at approximately 9:30 p.m. walking towards the beach. Shortly after at about 10 p.m., security cameras show Lorber walking up the stairs, toward the trailer park, and away from the beach.

The next day, concerned family members contacted law enforcement to file a report out of concern for Lorber’s safety. Communication from Lorber with the family member late on the 23rd was cryptic (as described by a source who saw the texts), and indicated a disturbing tone.

While Lorber was described as suffering from “depression”, sources close to the family say her depression was mostly situational based on traumatizing events, including the death of her sister from a rare form of cancer that took her life in a span of 7 weeks from diagnosis to death.

Lorber’s car was found just east of the light at Paradise Cove on the north side of PCH, in front of a storm drain. An off duty member of Malibu Sheriff’s Volunteer on Patrol was returning from a private event and noticed the car at approximately 11:00 p.m. and called Lost Hills Sheriff’s Department to respond to the scene.

Deputies described the rental car as “clean”, with a white towel in the car (which appeared to be possibly from the hotel she was staying at). Air and ground search teams were immediately deployed, and continued searching throughout the holiday weekend.

A beachgoer turned in Jennifer’s backpack found on the beach over the weekend to Paradise Cove Cafe’s Lost and Found. The backpack contained her wallet and credit cards.

Dive teams were actively searching the ocean since the early morning hours of the 24th up until a body was found this morning, and confirmed by LASD at 11:28 a.m. 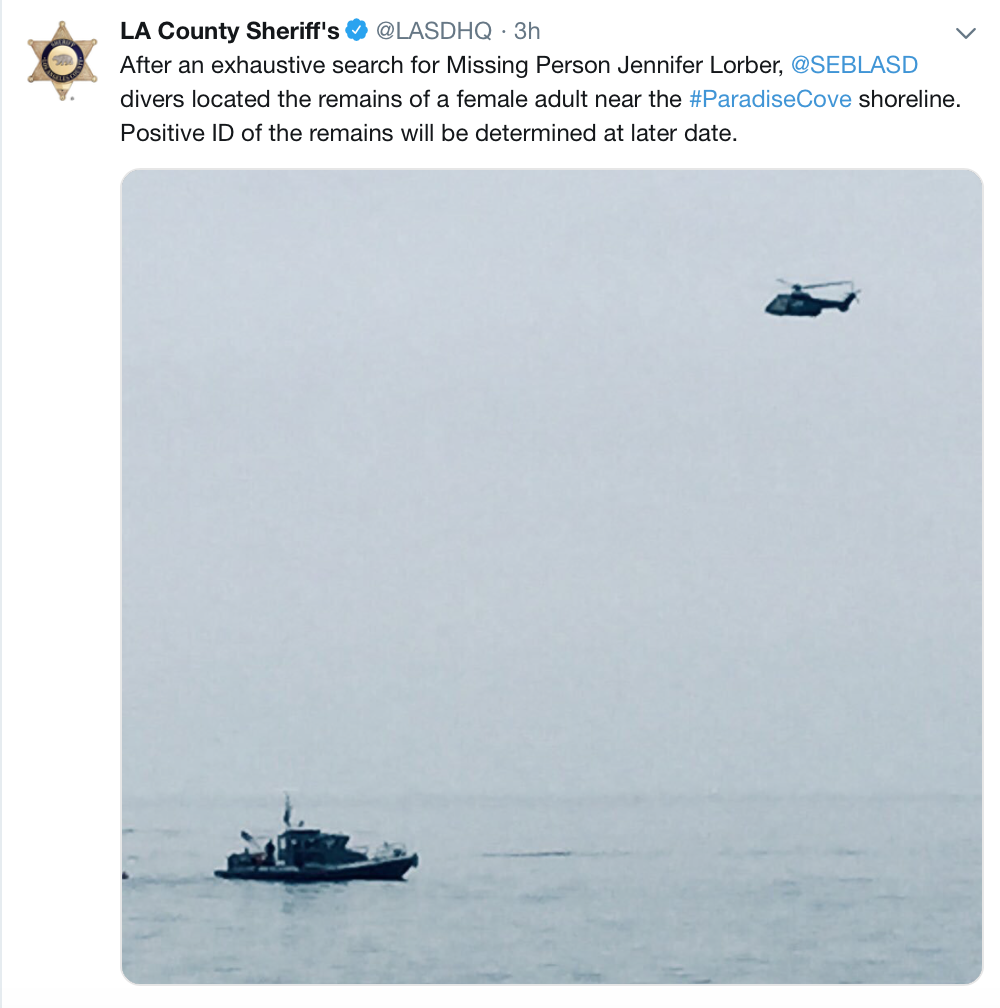