The well was the affiliation of Quinn Emanuel with Engstrom Lipscomb & Lack, a professional association of the two law firms which developed after the Woolsey Fire devastated much of Malibu last November.  Dozens of lawyers and their firms raced to gather as many Woolsey Fire victims as possible.  Their goal? Strength in numbers.  The more clients a law firm represents in the disaster, the more likely the law firm will be appointed by the court to the coveted position of  lead counsel in the inevitable mass civil action those victims would ultimately pursue in court. And appointment as lead counsel equals a percentage of not just the firm’s own clients, but also a percentage of all plaintiff’s proceeds received in the mass action for services provided as lead counsel.  Lead counsel equals big money.

The poison was the “material confidential information” SoCal Ed alleged it shared with Quinn Emanuel during a December 2017 meeting in which Quinn Emanuel was vying to be appointed as SoCal Ed’s defense counsel for lawsuits the company faced from the 2017 Thomas Fire.

Since most relationships are based upon honesty and trust, one could perceive that Quinn Emanuel would have shared the material confidential information it learned in those meetings with SoCal Ed (the poison) with its Woolsey Fire partner, Engstrom, Lipscomb & Lack.  Both law firms played together in the same well.

We may never know. Judge Highberger apparently did not consider the potential relationship between Engstrom and Quinn Emanuel, and never conducted any evidentiary hearing to ascertain if, like Quinn Emanuel, Engstrom had also been poisoned, whether by actual evidence or the appearance of such evidence of access to that material confidential information, a relevant disqualifier.

To the dismay of certain advocates, including a Facebook Group and its moderators who hosted a dog-and-pony show of specially-invited lawyers and their law firms to vie for their member’s business in exchange for a substantially reduced attorney’s fee, on June 20th, The Local Malibu attempted to explore the disqualifications of Engstrom, Lipscomb & Lack by submitting questions to the court for our readers.

In response, Mary Eckhardt Hearn, public information officer for the Los Angeles County Superior Court, fenced our questions by citing Canon 3(B)(9) of the Code of Judicial Ethics, citing, “A judge shall not make any public comment about a pending or impending proceeding in any court, and shall not make any nonpublic comment that might substantially interfere [emphasis added] with a fair trial or hearing.”

It appears the only substantial interference is the Court’s own efforts to avoid rebuke and dodge the obvious:  How can Engstrom, Lipscomb & Lack be permitted to represent Woolsey Fire plaintiffs when the court disqualified its partner, Quinn Emanuel Urquhart & Sullivan?  Both firms played in the same well, but only one was poisoned by exposure from SoCal Ed to material confidential information?

When The Local Malibu contacted the court for its comment on the poisoned well issue, the court used CaseAnywhere and sent its own message to all attorneys in the Woolsey Fire Litigation case.  That is, a private message.  Not a notice sent to counsel for all parties and filed with the clerk of court in the public record.  Not a comment made by Judge Highberger in open court and recorded by a court reporter.  Not a morsel of a recordable document accessible by the media.  Only a private message accessible by attorneys granted special access to CaseAnywhere. 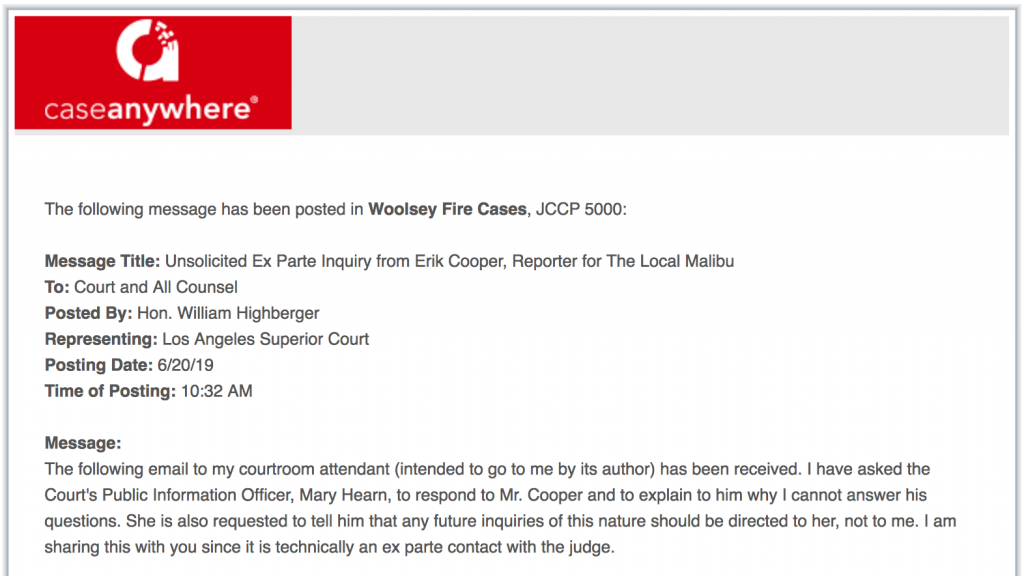 Judge Highberger’s private message was kept secret for well over two months, likely by your own attorney if you are a Woolsey Fire plaintiff.

Judge Highberger’s private message suggested The Local Malibu’s efforts to research our story demanding transparency of the court and the legal process constituted “ex parte contact.”  The Local Malibu and its writers are not parties to the Woolsey Fire Litigation case, and if the court were truly transparent, our questions for the court should have been filed in the public record for disclosure not just to the attorneys who subscribe to CaseAnywhere, but to the plaintiffs, to the public, and to the media.

According to Hearn, “Although a copy of the communication in question was provided to The Local Malibu upon request, it appears the document had not been placed in the court file.”  Surprise!  Hearn continued, “That has been corrected [as The Local Malibu demanded], and staff have been reminded of their obligations in this regard.” Caught.

Judge Highberger’s oversight of filing his private message with the clerk of court was no error.  It appears the court and lawyers in the Woolsey Fire Litigation have been using CaseAnywhere to communicate privately for quite some time now, since the court approved its use, and continue to use the private CaseAnywhere message board as its communication platform today.

The Local Malibu has requested all communications either sent or received by the court and all attorneys on the proprietary CaseAnywhere platform. We anticipate sharing with our readers more private messages communicated between the lawyers and the court, but not Woolsey Fire victims themselves, whose best interests remain compromised today.

In the interim, The Local Malibu intends to report our concerns for judicial misconduct and, quite possibly, for corruption involving Judge Highberger to the State of California Commission on Judicial Performance.  We will cover the Commission’s response to our concerns in our future reporting.

It seems Woolsey Fire victims face new challenges, caught in the cogs of those wheels of justice.  The court, in all of its actions, must always convey an open, honest, and transparent relationship with the parties, and with the public, for our justice system to work properly as intended.  Otherwise, misconduct, like Judge Highberger’s choice of communication platforms and his omission of disclosure of those private communications with others, creates the appearance of impropriety and secrecy, of backroom deals at the expense of victims, while the wheels of justice continue to crush the Rules of Civil Procedure governing the court’s conduct on the rails ahead.

Continue to follow our FireWire coverage of up to the minute news and information to help Woolsey Fire victims recover from this tragic event.