Almost one year ago, on August 11th, 2018, The Local Malibu posted reports on our social media platforms information regarding a “lost hiker”. That lost hiker quickly turned out to be Matthew Weaver Jr., 21, of Simi Valley, who disappeared near Topanga Lookout, and the circumstances surrounding Weaver’s disappearance had nothing to do with hiking.

Weaver was reported missing in the early morning morning hours last August 10th-11th, and during the course of the last year, The Local Malibu has uncovered information that Weaver knew he would be confronted with potentially dangerous criminal activity that fateful night, which ultimately lead to his disappearance, and also possibly, his demise.

The summer of 2018 was a stressful time for local residents. Ongoing reports of shots fired in the canyon after the murder of Tristan Beaudette at Malibu Creek State Park on June 22, 2018 had the community on edge.

The police activity at the corner of Stunt and Schueren Road on the morning of August 11th raised red flags prompting a resident to reach out to our publication notifying us of law enforcement presence in the area.

In the previous months, The Local Malibu became well known for exposing the law enforcement cover-up of shooting incidents at Malibu Creek State Park dating back to 2016. Authorities failed to warn the public of the shootings leading up to the murder of Tristan Beaudette who was killed in his tent at 4:44 a.m. as he lay next to his two young daughters.

The night of the Beaudette murder, The Local Malibu announced on our Facebook page that there was a potential sniper on the loose in the area. A resident sent a message to our inbox notifying us that a Tesla was shot at in the hood 4 days before the murder, at approximately the same time, just outside Malibu Creek State Park on Las Virgenes/Malibu Canyon Road. Almost immediately after the warning was posted, victims came onto the thread telling they’re harrowing stories of being shot at while staying at the campground. The thread went viral, and global media exposure followed. In the days, weeks, even months after the murder, as more reports of shots fired were posted by The Local Malibu, more media outlets started following our stories on the shootings.

With a recent murder and ongoing reports of shots fired in the area, it was surprising that when Matthew Weaver Jr. first went missing, local news stations ignored the family’s pleas for coverage of his disappearance. The family was also extremely frustrated as authorities brushed off Matthew’s disappearance from the beginning as a potential “suicide” given the recent dangerous activity in the canyon. This was especially troubling with a potential sniper on the loose. These events led to Matthew Weaver Sr. to reach out to The Local Malibu hoping to get exposure for the story, and potentially receive additional help to find his son.

Knowledge of the area led our publication to connecting Weaver’s disappearance to the shootings occurring in the area possibly, as well as two other mysterious disappearances that occurred in the canyon over the last 10 years.

Mitrice Richardson went missing in 2009 after being released at 12 midnight from the Lost Hills Sheriff’s Department under very suspicious circumstances. Her body was found 11 months later in the same canyon. The Richardson case cast an ominous dark cloud over the Lost Hills Sheriff’s Department and their handling of her arrest and subsequent release. The case has been so controversial it prompted the newly elected Sheriff of L.A. County, Alex Villanueva,  to announce he will be re-opening the case.

Elaine Park disappeared in 2017 and although her car was found on PCH near Corral Canyon Rd., she was last reported seen in the same canyon where Matthew and Mitrice disappeared. Park has not been found.

Once The Local Malibu made connections to the other high profile disappearances in our first article, Matthew’s Weaver Jr’s case suddenly become a more “viable” news story and was quickly picked up by local and national media outlets.

The new series of articles The Local Malibu is releasing regarding the Weaver case will provide updates regarding Matthew’s disappearance, and will release important information the public should be aware of when interacting  with law enforcement when a friend or family member becomes a missing person.

The articles will also explain the influence independent investigative journalism can have obtaining the exposure necessary to motivate action in a missing persons (or possibly even homicide) case, as well to enlist the public’s help in gathering and distributing information.

Nearly twelve months after Matthew Jr. went missing, over 2000 tips have been submitted, and information currently being sifted through. Articles of blood stained clothing, a baseball hat, and a car key belonging to Matthew are currently awaiting DNA testing.

Unfortunately, to date, the case has seen little cooperation from LAPD in spite of information strongly indicating foul play may be involved. As the investigation continues, we hope to see more law enforcement involvement and progress in the case. And with the help of the community, we hope to get closer to solving the mystery of the disappearance of Matthew Weaver Jr.

Over the past year, The Local Malibu has stayed in close contact with Weaver’s family. We spoke to Matthew Sr. recently about the last interaction he had with his son before he went missing that fateful night of August 10th-11th, 2018:

“He went to work to pick up his paycheck. Then he came into my fifth wheel and I had my gun on the kitchen table. He asked to see it. I said ok. I disarmed it. Opened the chamber and left it open. He wanted to take a pic of it in his hand but I never asked him why. We talked for a little while longer. He said he had to go that he was going to go hang out with the girl he showed me a pic of a few days before. And by this time it was early next morning 12 a.m.ish (August 10th). I walked him up to his car gave him a hug told him that I loved him and to be safe. Don’t be driving fucked up I told him. That was August 9th to the early morning of the 10th.” said Weaver Sr. 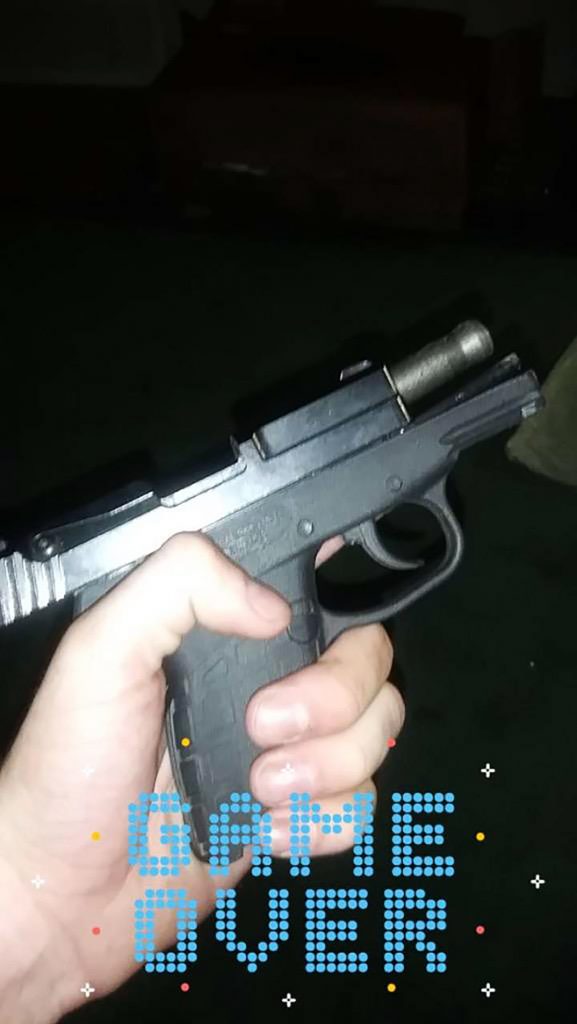 “The last night I ever saw him again he wanted a pic of my gun in his hand. He either was trying to prove something to somebody that he had a gun to protect himself, or show others he was in a scared of them maybe he was being threatened. A friend of Matthew’s told me he also asked him for a gun. He also asked me that night, the last night I saw him, for my gun or for me to buy him one.”

The interaction Matthew Weaver Sr.had with his son indicated that Matthew was anticipating potential dangerous circumstances the night he disappeared. Close friends have indicated Matthew was very well aware of the dirty dealings of the people he was going to meet that fateful night, which led him to seek possession of a weapon.

Friends also indicated that there were definitive connections to gang activity and drugs involved in Matthew’s disappearance.

Last year, not one but two bodies of executed gang members were discovered in the area.

Reynaldo Cruz, 52, was found dead in May, in his underwear, by a resident in a ditch behind the Hindu Temple on Las Virgenes Road. The cause of death, apparently by various signs of torture, reported to have the distinct markings of an MS 13 execution style gang hit.

The decomposed body of Roger Chavez Barahona, a 19 year old latino male, was found near Fire Camp 8 on July 19. Coroner reports state that Barahona died as a result of gunshot wounds, not related to Malibu Canyon shootings, however, does appear to be gang affiliated.

Here is the timeline from the night of his disappearance provided by law enforcement: 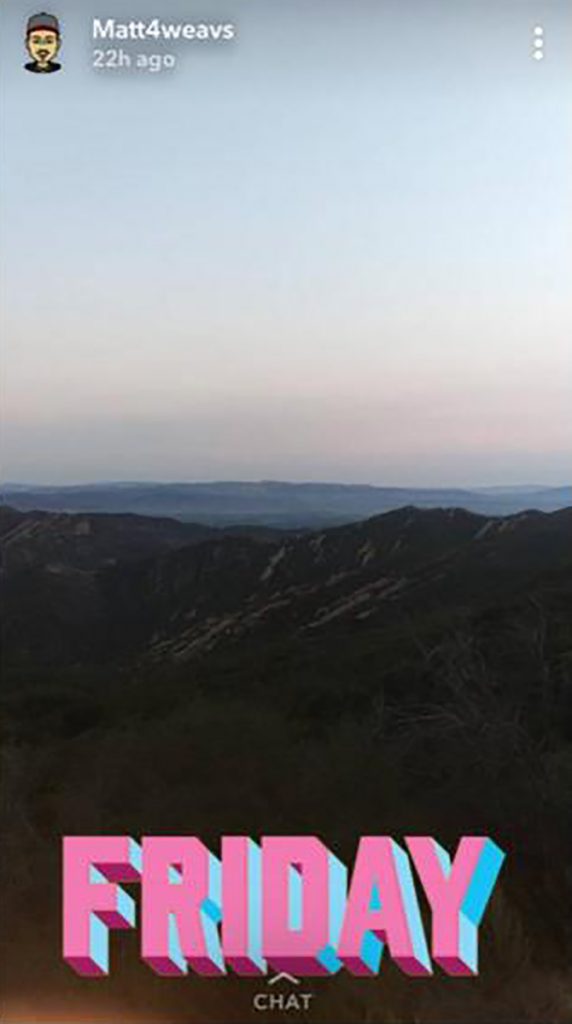 Shortly after 12 midnight August 11th, a witness called 911 after hearing a cry for help – screams near Stunt and Shueren Road where Matthew Jr.’s grey BMW was found.

First responders arrived shortly after at approximately 2 a.m., and at least two of them, a member of the CHP and of the Fire Department, also heard screams/cry for help.

The Lost Hills Sheriff Department and Malibu Search and Rescue responded to the scene with air and canine support, as well as infrared technology. Search and Rescue including Air Rescue 5 searched Backbone Trail twice immediately upon learning of Weaver’s disappearance.

According to Matthew Weaver Sr., canines did pick up a scent but lost it before they reached the road. Scent dogs and cadaver dogs have been used in the searches, the cadaver dogs specifically were used on the Monday following Weaver’s disappearance. 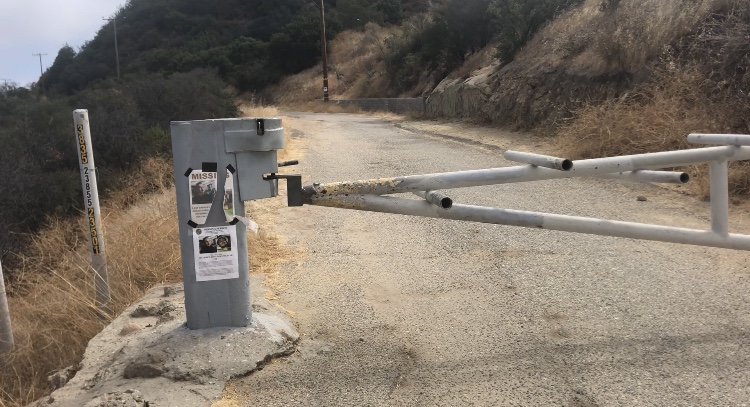 The hike to Topanga Lookout, past the locked white gate that Matthew’s car drove past was thick with negative energy – even in broad daylight. Creepy characters loitering about has completely changed this once serene environment frequented by hiking enthusiasts. It is most certainly a “hike at your own risk” scenario.

The area is known for the shady activity that now takes place at all hours of the day and night. The last known text Weaver sent out at 11:53 a.m. indicated a dangerous scenario was taking place at that moment, during the daytime hours of August 10th.

Less than 24 hours later, Malibu Search and Rescue was actively searching for Weaver and the mystery of his disappearance has gone unsolved to this day. 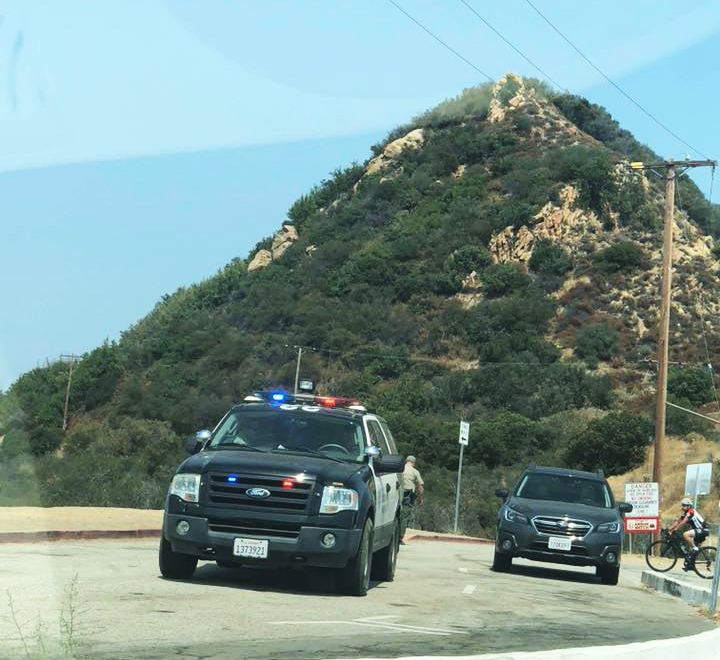 The story continues in the next installment of this series. – Cece Woods, Editor in Chief

*PLEASE NOTE: Unlawful duplication, republishing and distribution of any material on this website is prohibited. Failure to abide by of Terms of Service will be subject to legal action.
Share this
Tags: