The fall-out from the criminal warrants served at LA Metro Headquarters and the homes of Supervisor Sheila Kuehl and her friend and colleague Patti Giggans, CEO of Peace Over Violence, continues to unfold and it looks like it could potentially include another member of the Board of Supervisors.

Hilda Solis, a staunch critic of Sheriff Alex Villanueva, was not named in the warrants executed on September 14th, (further  debunking allegations that Villanueva was solely targeting his political enemies), however, given new information received by The Current Report, Solis could very well be the next Supervisor to be under criminal investigation for Pay-to-Play.

Shortly after the raids, Solis was vocal with her support of Kuehl and Giggans despite overwhelming evidence of cronyism among other criminal activities, openly condemning Villanueva’s actions.

“I have concerns about the integrity of any investigation conducted by the sheriff, especially as it relates to those who have consistently called for oversight, accountability and transparency over the sheriff and his department, like my colleague, Supervisor Sheila Kuehl,” Solis wrote in a series of Twitter posts. 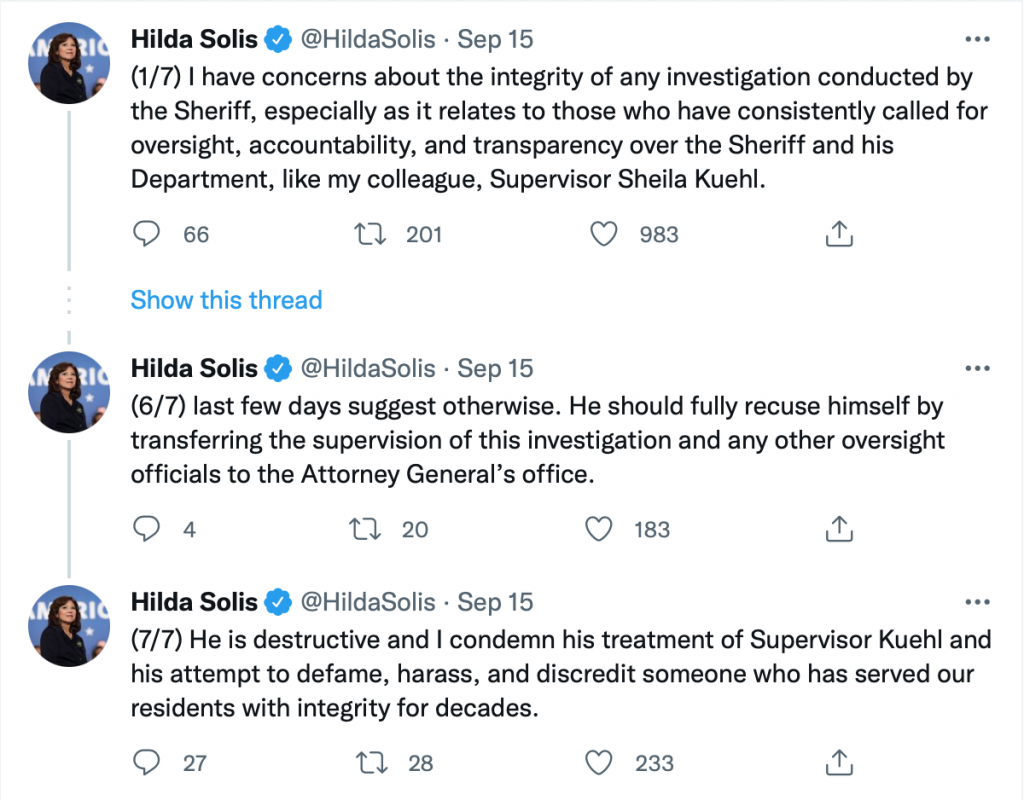 However, based on Solis’s involvement in what looks like potentially the next Pay-to-Play investigation surrounding corrupt L.A. politicians, her support could be somewhat of a Freudian slip of sorts.

“Based on the information I have been privy to, the next round of warrants, especially as it relates to the federal vetting of Biden FAA Nominee Phillip Washington, may likely be the Pay-to-Play arrangement between L.A. City Councilman Gilbert Cedillo, Hilda Solis and Phillip Washington related to the Westlake MacArthur Park Vender market on L.A. Metro Property.” said Adam Loew, Political Corruption Expert and husband of LA Metro whistleblower Jennifer Loew. “The big questions is whether Solis’ involvement in the allegations of an agreement between former LA Metro CEO Washington and Cedillo to defraud the Citizens of L.A. County of $1.2 million dollars in exchange for political favors can be prosecuted criminally.”

Loew is referring to the $1.2 million invoice that has never been paid by Cedillo on the joint Westlake MacArthur Park Vender Market, Supervisor Solis’s pilot project. 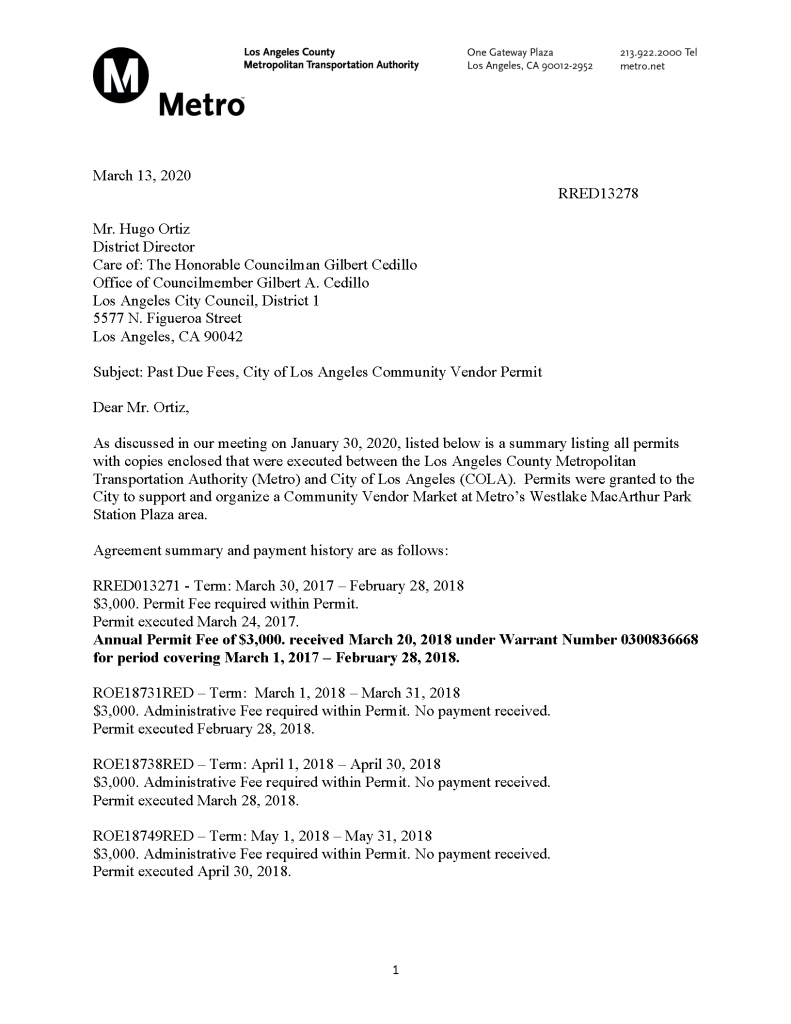 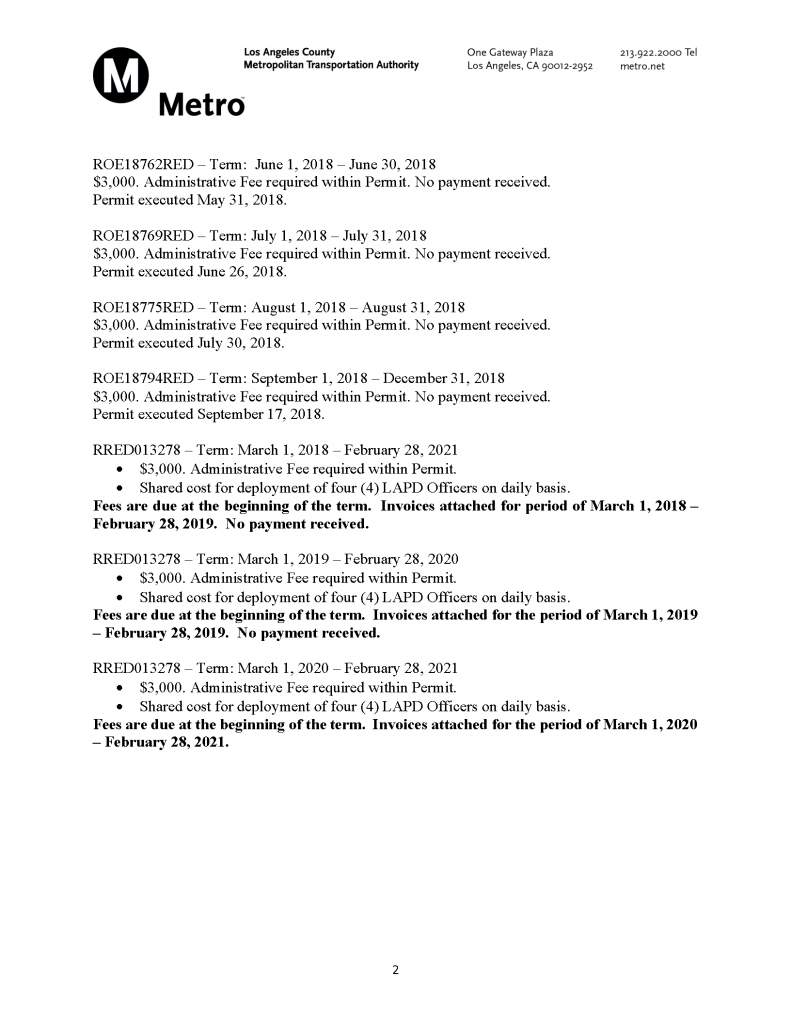 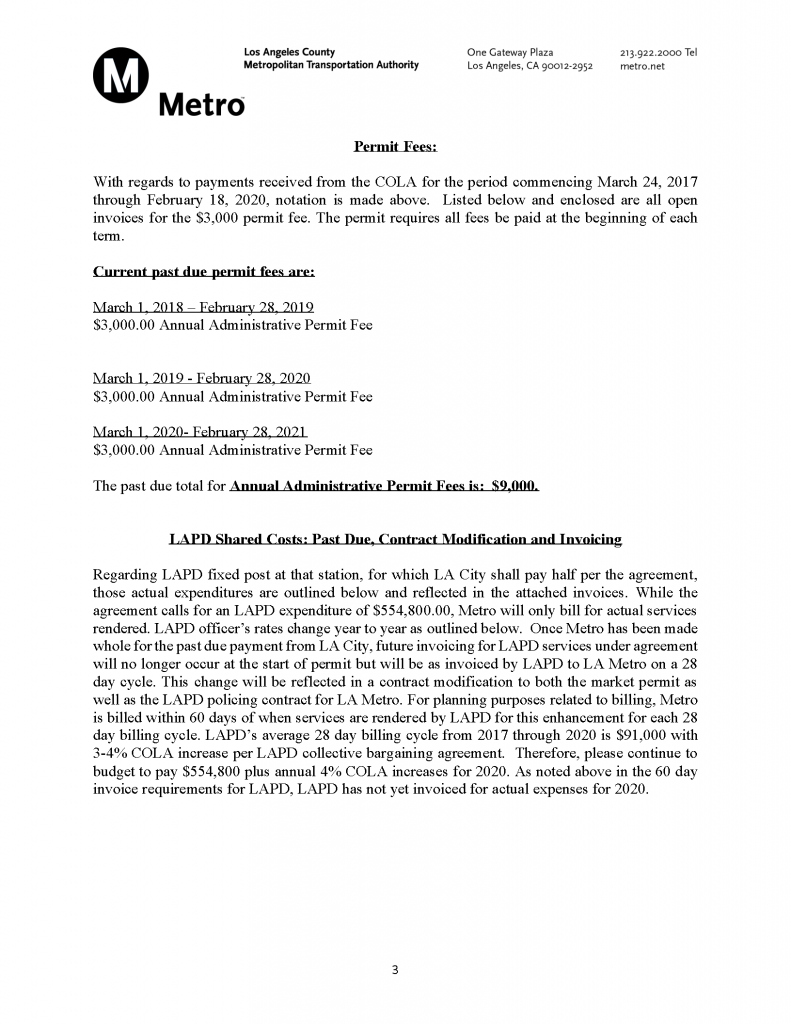 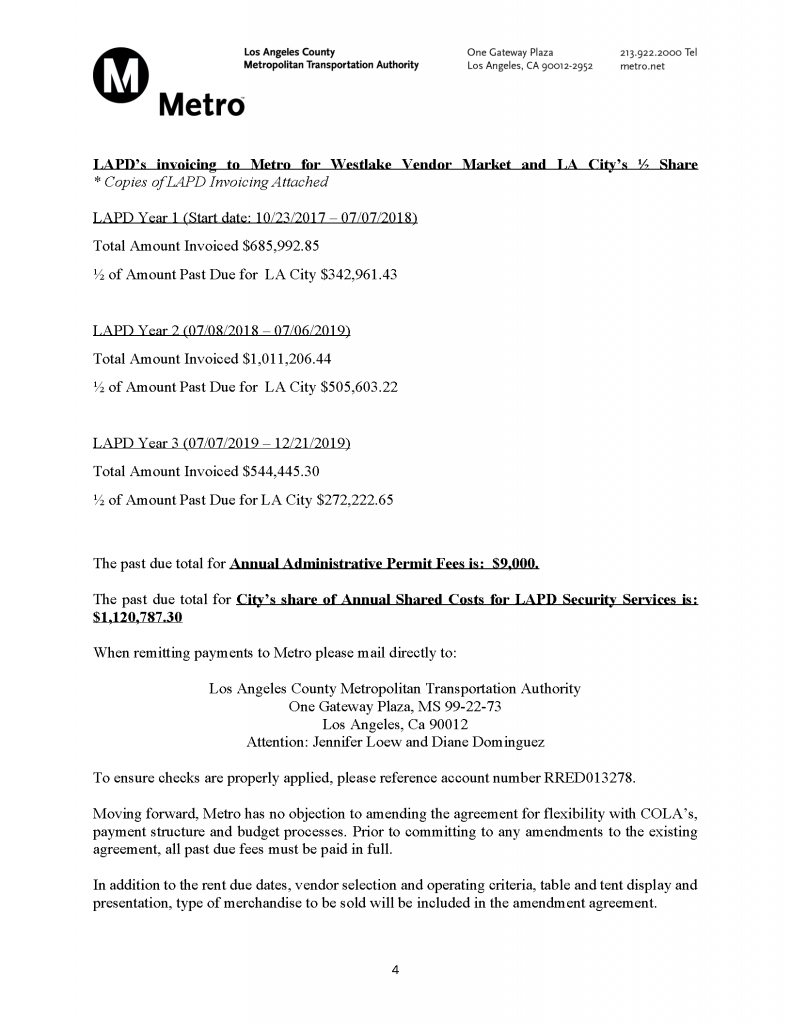 Following the issuance of the letter to collect the $1.2 million for the project, Jennifer Loew, Special Projects Manager at LA Metro at the time, was called into Washington’s office and ordered not to collect the invoice due to L.A. Metro advising Loew that political favors (from Cedillo) were more important to L.A. Metro than over $1million dollars in revenue.

Inquiring minds want to know… where did the money go? 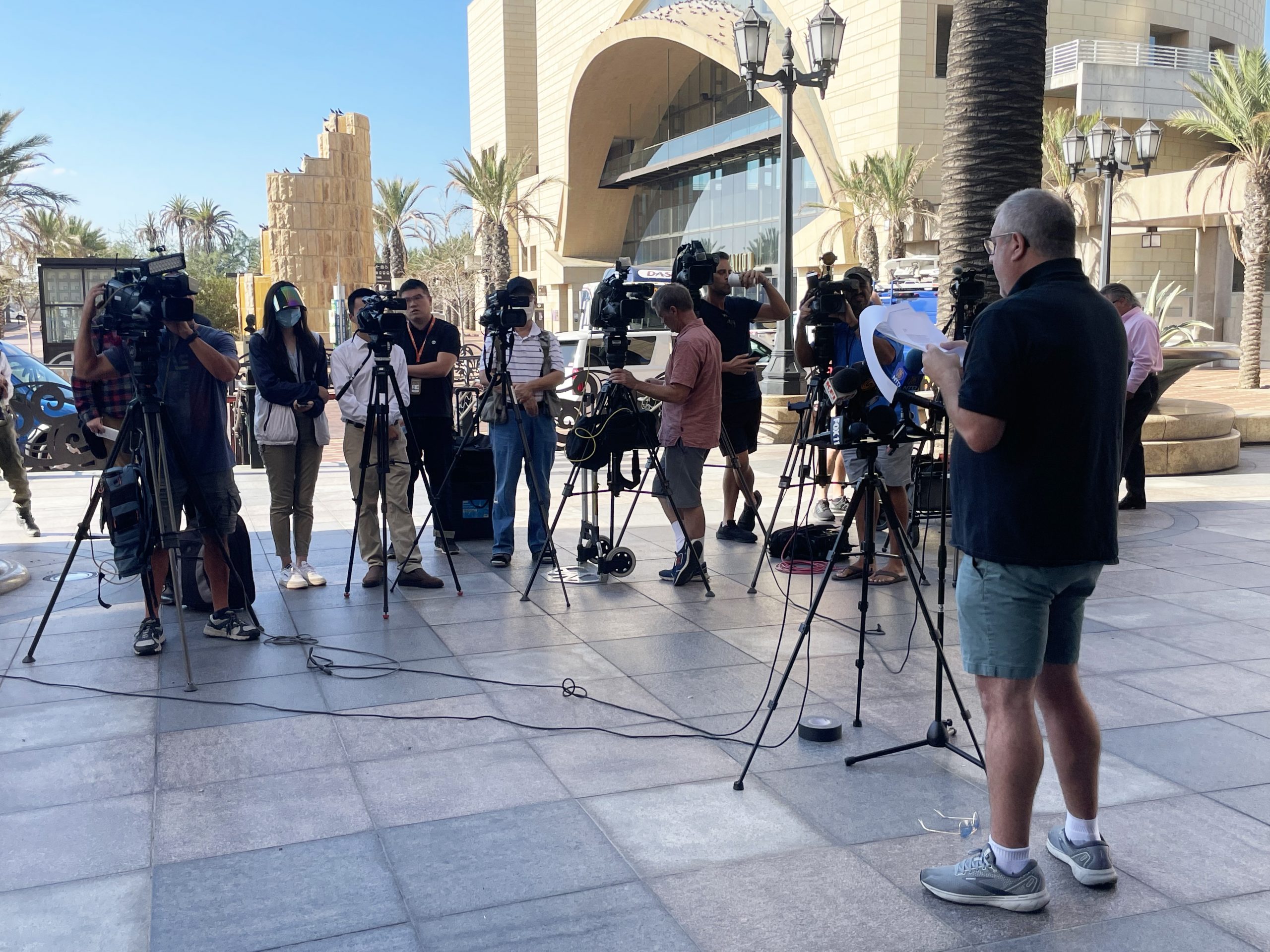 Shortly after the raids at LA Metro Headquarters, Loew called a press conference detailing years of retaliation his wife, Jennifer, a former Special Projects Manager at Metro and his family endured for whistleblowing. Every major press organization in Los Angeles attended, yet not one reported on the litany of criminal activities Loew exposed at the presser – including the Solis’s pilot project and the missing $1.2 million.

It appears political favors continue to be in play as the embattled former CEO of LA Metro continues to finagle his way into the top spots in public transportation despite multiple high-profile criminal investigations.

In July, shortly after Washington was nominated to head the FAA, The Current Report was contacted by a watchdog group in DC who joined the effort already in progress by the Department of Justice and the US Senate Committee on Commerce, Science and Transportation.

The American Accountability Association, a charitable and educational organization that conducts non-partisan governmental oversight research, approached The Current Report to assist in their independent investigation which will be submitted to members of congress. Numerous documents and evidence provided by Political Corruption Expert Adam Leow to The Current Report were forwarded to the foundation who works closely with investigators on Capitol Hill.

Senator Robert Wicker, the ranking member of the U.S. Senate Committee on Commerce, Science and Transportation  released a statement regarding the criminal warrants and Washington’s involvement.

Following Wicker’s statement, President Biden ordered an investigation as to why the FBI was not present when the warrants were executed. Investigations may be shining the light on Washington’s alleged criminal dealings and considerably affecting his nomination to become head of the FAA.

“The warrants served to Kuehl, Giggans, Huntsman, and Peace Over Violence are the ‘tip of the iceberg’” said Loew “The efforts of Supervisor Kuehl, Max Huntsman, Patti Giggins and their attorneys, who have worked relentlessly in the last couple of days to put this investigation into the hands of California Attorney General have given this case heightened national attention. With the Feds involved, now there will be a real vetting process.”

However, things aren’t looking promising in the realm of future political powers being prosecuted should Sheriff candidate Robert Luna take the top spot in the November election.

Luna, who is neck and neck with Sheriff Alex Villanueva in the polls could potentially thwart the progress in investigating the political powers that be since he is unanimously endorsed by the Board.

“I have enormous respect for Supervisors Barger, Hahn, Kuehl, Mitchell and Solis and their work to govern our County and empower our communities, and their endorsements are very humbling and important to me,” said Chief Luna. “Their unity in supporting my candidacy is a powerful vote of confidence in my ability to provide new leadership for the Sheriff’s Department. If elected, I very much look forward to working closely with each Supervisor and their staff, to be accountable, to hear and address the concerns of LA County residents, to keep our communities safe and to ensure our law enforcement service is constitutional.” 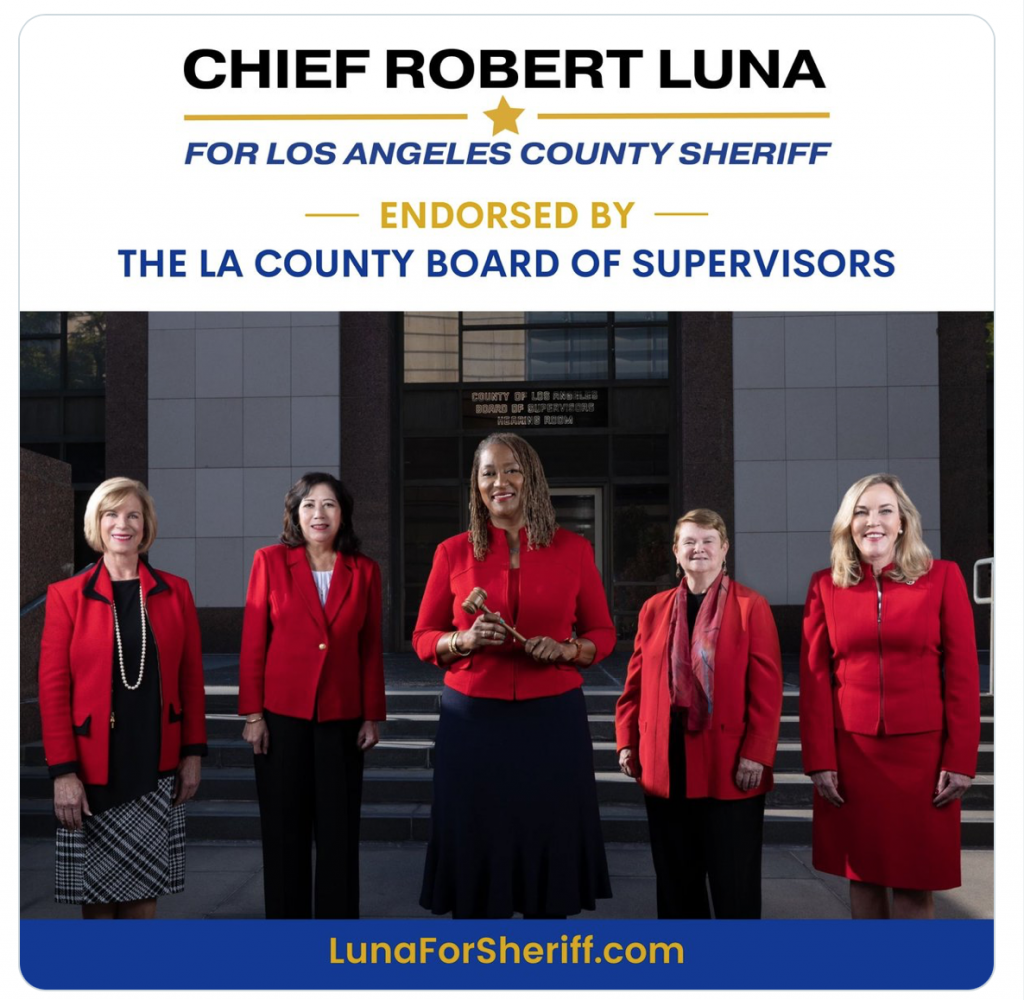 Luna’s willingness to be held accountable by the Board overshadows his unwillingness to hold Supervisors to the same standards, if not higher than his own.

And judging by the mountains of lawsuits, discrimination, homeless issues and more that plagued Luna as Chief of Long Beach Police Department, the bar has been set very, very low.

Our only hope at this point, judging by the overwhelming amount of players involved in LA County political back-scratching, is to hope the Feds come out with bigger claws.