While we all get a few more gray hairs waiting for ballistics to come back on the rifle Anthony Rauda allegedly had when he was taken into custody, now might be a good time to review the events leading up to the his capture on October 10th.

And… why two visits from SWAT didn’t turn up the suspect, but potentially critical information from a tip did.

All the world’s stage…

Looking like a scene from Rambo, the Malibu Canyon community was thrown into a virtual frenzy with the first high profile production courtesy of LASD on October 2nd.

It was an unprecedented show of force – and in plain view – right in the middle of the morning rush hour commute while parents ushered kids to school, and members of the community made their way to work.

Approximately a dozen patrol cars, Search and Rescue, the K-9 unit and SWAT, were staged at Rauda’s last known location, 26800 block of Mulholland Hwy, where he allegedly broke into an unoccupied office at approximately 3:30 a.m., searching for food, with a rifle in tow.

Residents, who witnessed the police activity, called the station obviously worried for their safety. They were told by a deputy that they, and other specialized, tactical units, were searching for an armed burglary suspect. What they conveniently forgot to mention was that the suspect committed the burglary two days before, and this was not an “active” crime scene.

Little clues that the October 2nd “mission” was merely for show became more apparent as the day progressed.

First clue was the appearance of NBC, and only NBC, on cue to catch the exclusive. The second clue was the Special Weapons Team, taking time for a photo op, mid maneuvers, for their Twitter followers.

It’s a good thing they did because had they not taken the time to post they were “tracking a felony suspect”, most of us who didn’t call the station, would have never known. 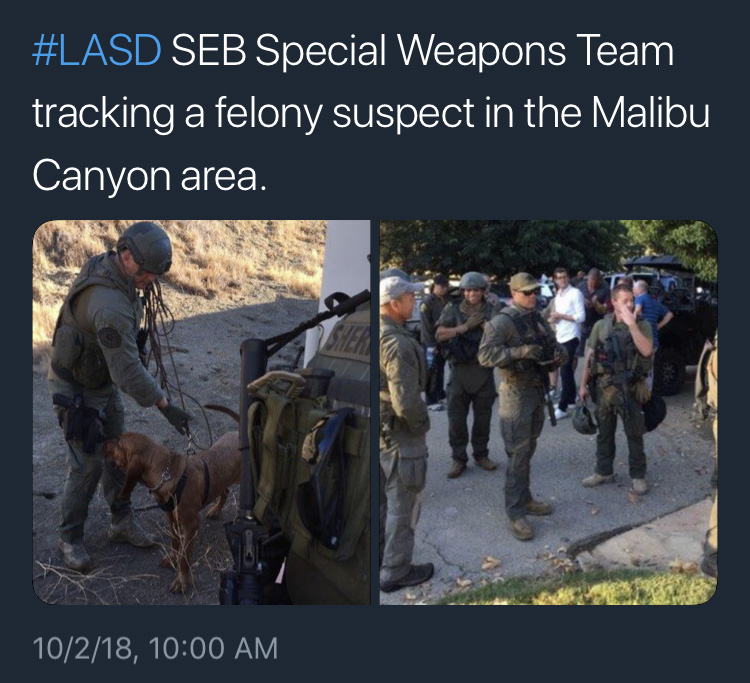 Judging by the non stop action in the canyon lately, it looks like I need to check their Twitter feed a little more often. 😉

By the end of what seemed like a very long day of crime fighting, I finally had my answers.

NBC’s Eric Leonard, who I have never met before, communicated with, or follow on social media, decided to seek me out personally (lucky me!), and graciously dropped the link to his “exclusive” of the day’s events, on my Twitter feed.

How nice of him to “inform” me on a story I had been reporting on (non-stop) since the day of the campground murder right? 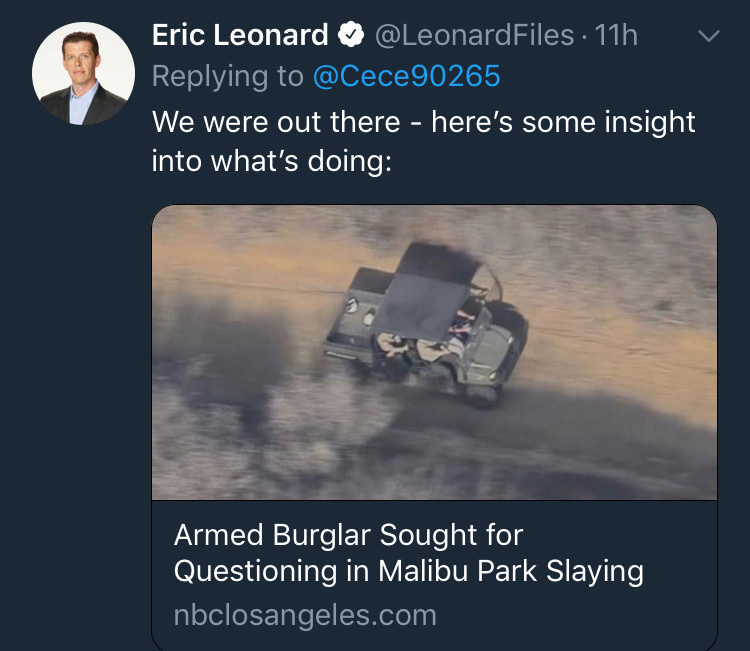 For those of you who don’t know, my publication, The Local Malibu was responsible for exposing law enforcement’s cover-up of approximately two years of shooting incidents leading up to the murder of Tristan Beaudette June 22nd at Malibu Creek State Park.

I have diligently stayed on the story since then, posting regular updates on our website and social media, including collaborating on a map of all of the incidents in the area. So, it was very interesting to see Leonard jump in, at what seemed like “the end” of the case (as LASD would have us believe), and just in time for the action to kick into high gear. Leonard and NBC were perfectly positioned to document it all.

So, based on what transpired on October 2nd, and with the information Leonard was kind enough to forward to me via his exclusive, I decided to go out on a limb, and offer my own “insight” to my new friend – which sure enough, came true 6 days later. 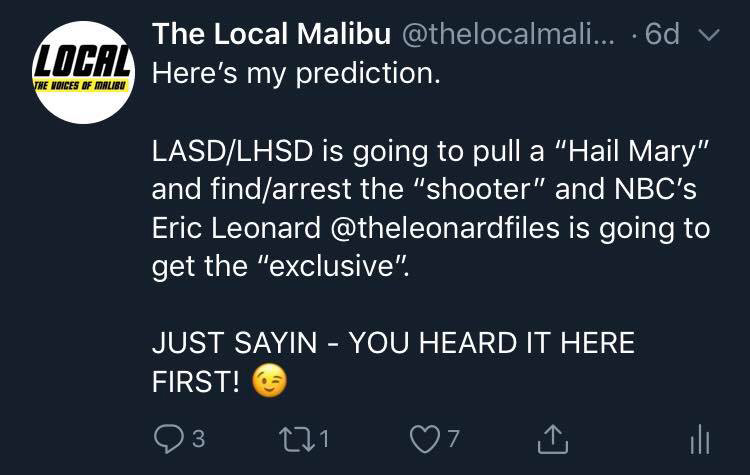 Time to play the lotto!

Out of the frying pan…

Once the dust settled from the opening day performance of the “Rauda Search”, the Los Angeles Sheriff’s Department Public Information Officer, Nicole Nishida, distributed an out of character, unusually forthcoming, press release to the media – immediately after NBC aired the exclusive.

If you were good at reading between the lines, you could very easily see what was about to unfold.

The writing clearly was on the wall – and now, all over the newswire!

Only 6 weeks before, state agencies and law enforcement top brass gathered at King Gillette Ranch for a Public Safety meeting hosted by Senator Henry Stern. Yet another high profile production aimed to calm residents, introducing a new “task force” formed specifically to “make our mountains safe again”. Concerned community members gathered in the auditorium ready to hear answers, but instead got the royal run around. Needless to say, they left the meeting very unhappy campers (pun intended).

So, pardon me if I am a little suspicious at the timing of LASD’s “come-to-Jesus” moment, a month before the Sheriff’s election, with what seemed like a full confession of key facts from the case.

Nishida conveniently dropped enough breadcrumbs to tie “recent events” to the burglaries, the shootings and the murder (which are separate, believe it or not), plus leaking a possible connection to the murder ( and weapon) – which before that day, we did not know was a rifle.

So, one big, obvious question is… why tell us now?

Was LASD was prepping us for an arrest, and a high profile press conference?

That is sure what it seemed like to me and is exactly how it went down on October 10th.

But not before a little more fanfare…

You’re either SWAT, or you’re not… 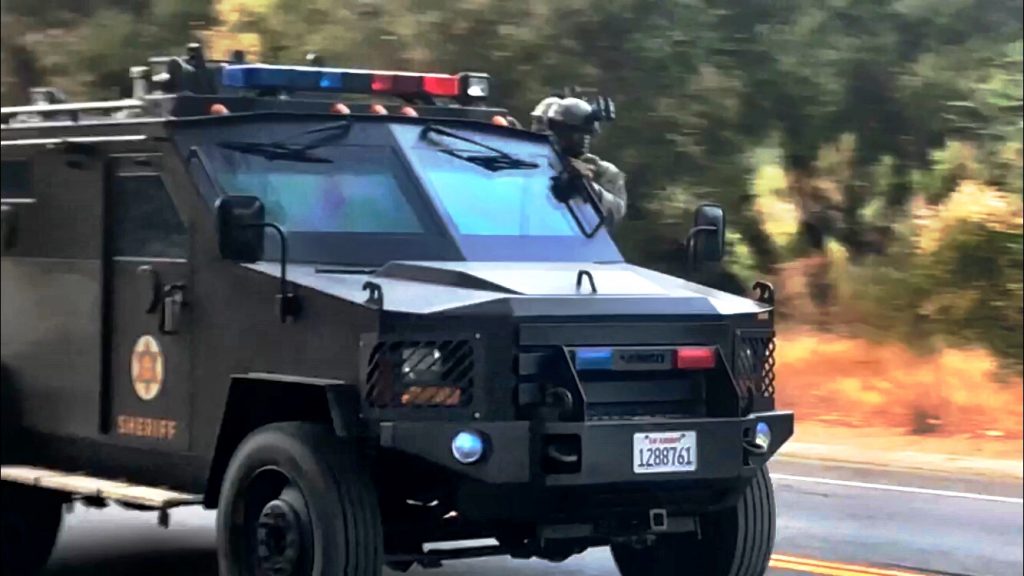 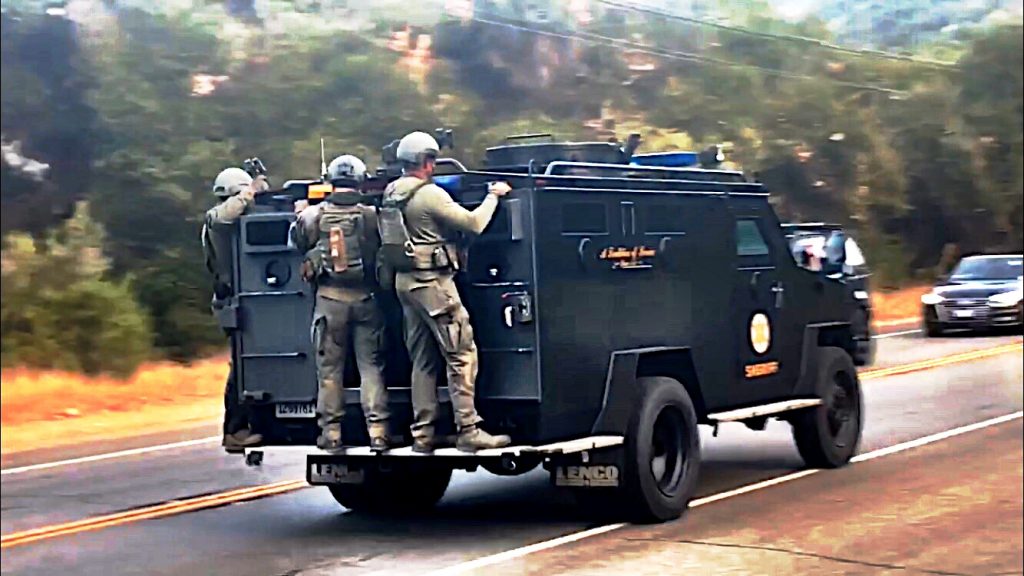 Fast forward a few days to Saturday, October 6th. While sipping our pumpkin lattes, hoping to get a little hammock time after what seemed like endless overnight propeller action all week (from LASD helicopters), just like that, the birds were back up in the air again.

Rumors of a suspect sighting by a maintenance worker at the Tapia Park close to Piuma and Malibu Canyon, were posted on social media with the news catching wind rather quickly.

Almost immediately, I was contacted by a local who travels through the canyon frequently, who has been monitoring the situation. He texted me information on the staging activity at King Gillette Ranch, including now the second appearance of the SWAT team and their Bearcat armored vehicle.

A few hours later, he texted me again. This time he said law enforcement was “on the move”, and the armored vehicle was headed to the creek bed, complete with assault rifles and bloodhounds.

When I arrived, I stood maybe 200 feet from the awe inspiring action – which was nothing less than surreal, but even more so scary as f*ck, because the area was not contained. AT. ALL. 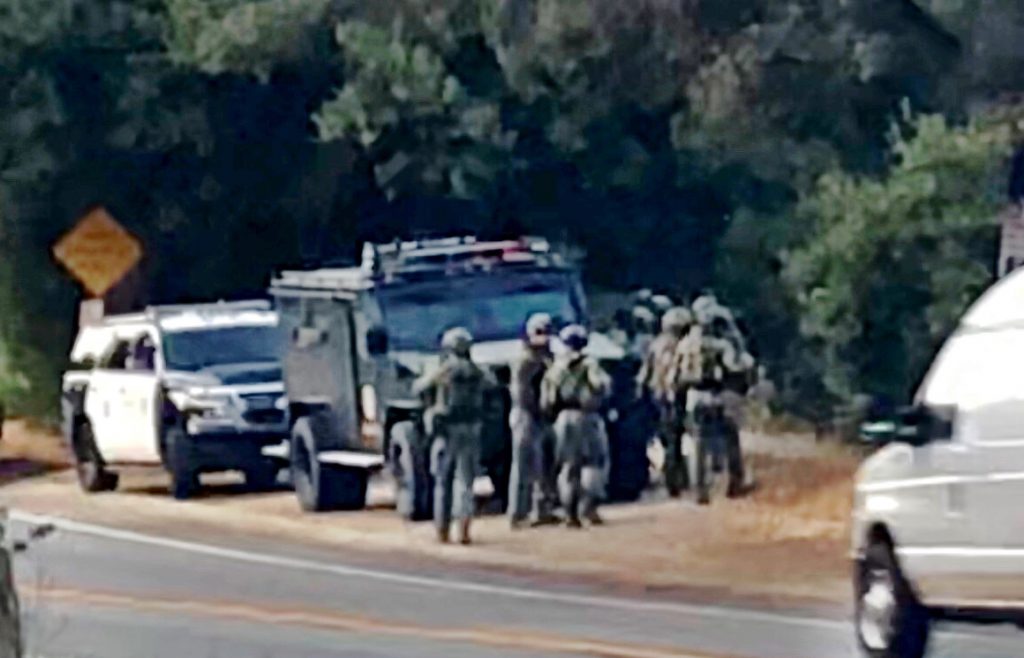 Although I had the presence of mind to stay a safe distance away, and got as much footage of the event as possible, anyone could have easily walked up to these guys, in full tactical gear, rifles in hand. Cars drove by as if it were no big deal. A virtual side note if you will, all the while, a supposed “pursuit” was going down.

As I furiously uploaded photos and video of what we thought was an “active pursuit” of a “dangerous suspect”, I received a text from one of my new found media friends. 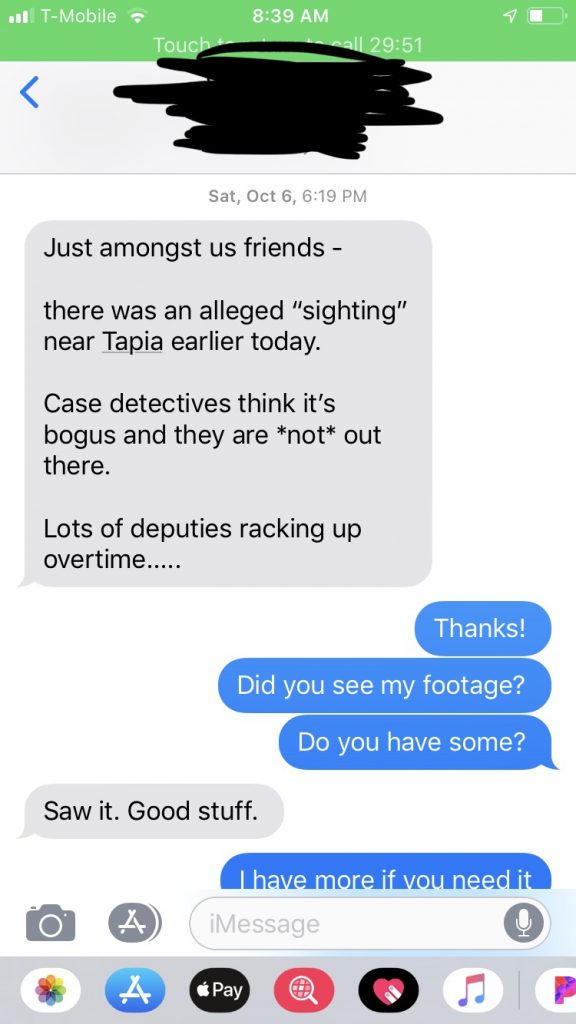 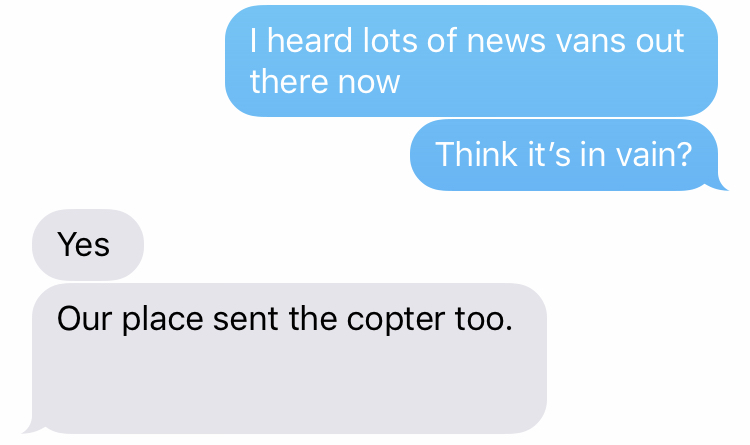 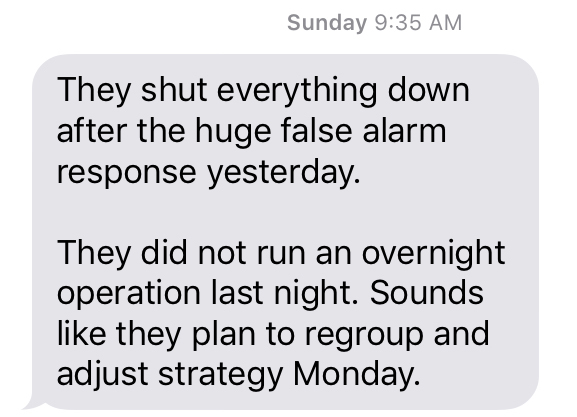 Needless to say, I was pretty taken aback by the honesty…

I mean, after all, we didn’t really know each other that well.

So, as any curious female would want to know, why would he be so trusting, so soon?

Why would he be divulging what seemed to be pretty “sensitive information” – after we had just met only days before?

Why was this guy trying to “jump into bed with me” (for lack of a better analogy) so quickly…?

After a completely drama free Sunday, no birds in the air, nada, Saturday’s show stopping production was clearly starting to shake out like LASD was pulling out all the stops before voters headed to the polls.

And, this “source” was obviously in on the whole “operation”, potentially trying to throw me off the scent.

Howeverrrrrr, I have since picked up a new scent.

The smell of the shotgun powder –  the was weapon of choice in at least 4 other shootings in Malibu Creek State Park before Tristan’s Beaudette’s murder.

Major news media have talked openly about the other shootings dating back two years, but avoided the topic of the type of weapon that was used, choosing to focus on the the murder weapon only.

We reached out to LASD P.I.O. Nishida, and two other members of the Sheriff’s Department in hopes of getting some clarification as to whether the shotgun has been recovered, and if they can tie the weapon to Rauda along with the murder weapon. 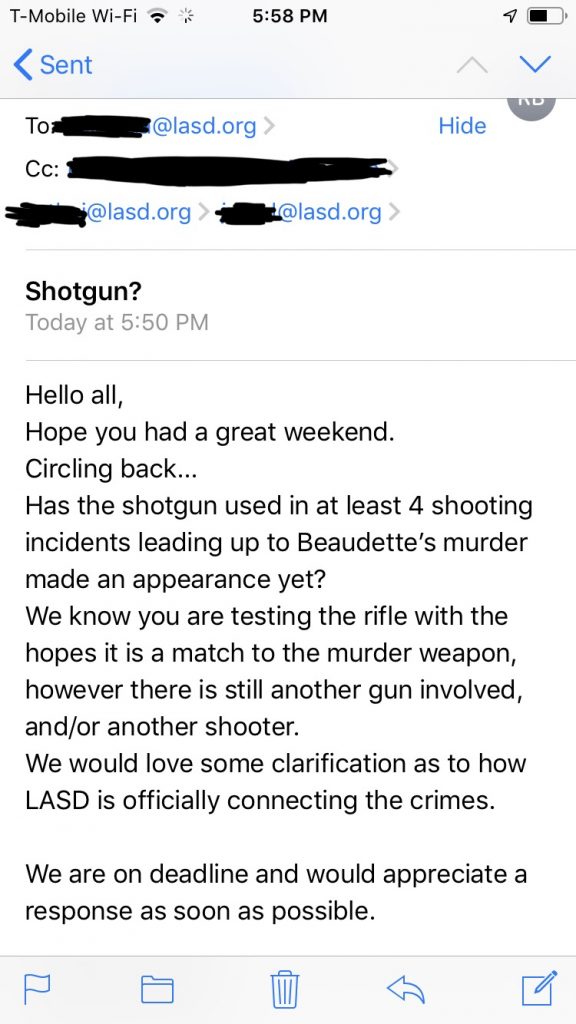 Does that mean we still have a shooter on the loose? If so, will it take another murder to bring him to justice?

Malibu Public Safety: Mayor of the Largest Contract City with LASD Tells Us the Truth About the Sheriff’s First Year in Office